A Look at the NHL Season Ahead 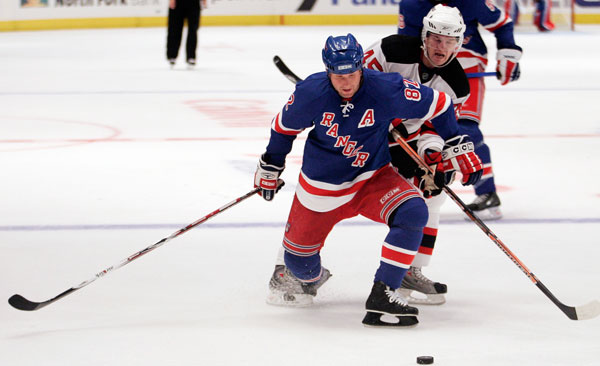 You may not have noticed that the NHL season started last weekend. While two games between two California teams in London may not have captured your interest, the three local teams that begin play tomorrow and the next few nights will all be fascinating stories throughout the season.

No team enters the season with bigger expectations than the Rangers. After landing two big centers in free agency, Chris Drury and Scott Gomez, New York is stacked offensively. Drury will center a line with Jaromir Jagr and Gomez will center a line with Brendan Shanahan. Sean Avery and Martin Straka will fill out the top two lines and all six players should see plenty of scoring chances. The question for New York will be on defense. If Marc Staal is ready for the NHL, he should solidify a corps that is mostly average. Luckily, Henrik Lundqvist is back in net and ready to continue his reign on Broadway. Add it all up and you have a team that should contend for the Cup in June.

While the Rangers scored in free agency, the Islanders were decimated by it. Ryan Smyth and Jason Blake left as soon as the free agency period began. Viktor Kozlov, Richard Zednik and Sean Hill followed them out the door. Bill Guerin, Mike Comrie and Rusian Fedotenko were brought in as replacements and will be put together as the top line, but they will have a tough time taking the place of the guys who left. One good thing is that Rick DiPietro who has 14 years until he is a free agent will provide solid goaltending every night. Last year they got in the playoffs on the last day, a feat that will be tough to do again.

The Devils also took hits in free agency, losing Gomez to the Rangers and perhaps more importantly, Brian Rafalski to the Red Wings. Lou Lamorillo brought in some solid replacements in Danius Zubrus and Karel Rachunek but the biggest addition was the hiring of coach Brent Sutter. Brent, the former Islanders captain and one of the six Sutter brothers in the NHL is considered one of the top coaching prospects in the game. He should continue the defense-first formula that New Jersey has worked so well and with Martin Brodeur in net the Devils will be in the mix for a playoff spot and would be a dangerous opponent in April.