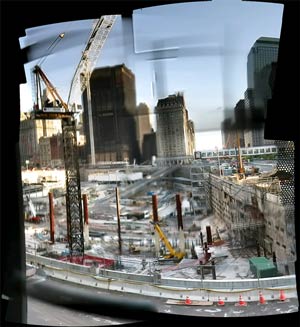 Some families of September 11 victims are upset that officials have moved this year's anniversary events from the World Trade Center site to Zuccotti Park. Governor Spitzer and Mayor Bloomberg sent a letter to family members explaining that the services would be moved to the park (which is at Broadway and Liberty) because of the rebuilding work.

Tunnels are being constructed for the transit work. Besides rebuilding work, there are renewed searches for remains. But families are upset enough to threaten to boycott this year's events over the move. A letter stated, "For us, and many Americans around the nation, the World Trade Center site is sacred ground" and questioned whether the park would even hold the thousands of mourners.

The letter was sent from eleven family groups; it also said, "Is it so terrible to stop construction for 1/2 day so that the fathers, mothers, sons, daughters, brothers, sisters, husbands, wives, children, friends and fellow citizens can respectively gather to remember and honor their fallen loved one?" It's unclear if the ceremony was moved because there are safety issues at the construction site, but one victim's mother said, "I don't know why it can't be on what many consider is sacred ground. There may be a legitimate reason, I don't know because they've never bothered to sit down and talk to us about it."

This year, first responders will be reading the names of victims (in previous years, siblings, children, and spouses/significant others have read the names). The letter said, "These men and women helped guide New York City and the nation through one of our darkest hours, and we are honored that they will join our ceremony as we remember and honor those we lost."