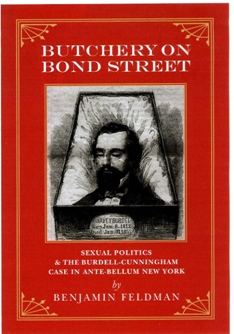 There are likely many unsolved crimes in New York City's past, but this week, one 150-year-old case finally gets a sort of closure. The crime was well-documented as the Butchery on Bond Street. Love, money, Bellevue, dentists...all the usual makings for criminal behavior are accounted for, and amNewYork spoke to Benjamin Feldman, who has written a book, The Butchery of Bond Street.

Harvey Burdell, a dentist who lived at 31 Bond Street, was "found in his office strangled and stabbed 15 times." His mistress, Emma Cunningham, was the main suspect. Feldman explained, "She needed a wealthy new husband willing to take on [her] five children. And she made a bad choice."

Burdell, according to Feldman, "took ruthless advantage" of [Cunningham], routinely raping her, impregnating her two times, and twice performing an abortion on her with his hands.

Still, she needed the money and respectability a husband would bring, and so, when Burdell refused to do right by her, she hired an imposter to stand in for him at a wedding ceremony. When this ruse failed, she took to violence.

After the dentist died, Cunningham insisted she was to get his fortune because she was carrying his child. But the only thing she was pregnant with was a lot of bad ideas: She stuffed pillows in her petticoat and then took a newborn from Bellevue to pawn it off as her own.

Cunningham, who had thrown herself on Burdell's on the open coffin at the funeral, was eventually acquitted at trial (Feldman tells the NY Times he believes she played a role in Burdell's death). She left the city but eventually returned, where she died in 1887 -- buried in Green-Wood Cemetery, just a few hundred yards apart from the dentist. Both were essentially disowned by their families and left in unmarked graves.

Now, fastforward to the present-day for closure: Feldman has a blog for the book and he announced that "custom-designed, historically authentic tombstones for Dr. Harvey Burdell and Emma Augusta Hempstead Cunningham will be unveiled in consecutive ceremonies." The tombstones use period fonts and images and he writes, "With the generosity and cooperation of Green-Wood Cemetery and the locatable family members of the decedents, appropriate and dignified stones will finally mark Burdell's and Cunningham's final resting places."

#bad ideas
#bond street
#cemetery
#children
#city
#crime
#death
#green
#history
#love
#money
#new york
#new york city
#News: NYC
#ny times
#the city
#this week
#Wood Cemetery
Do you know the scoop? Comment below or Send us a Tip
A new Gothamist is coming! We’ve moved comments over to our beta site. Click here to join the conversation and get a preview of our new website.