In the fall of 2014, Nate Cotanch opened up the Zia Green Chile Company, a new Smorgasburg stand dedicated to the New Mexican specialty green chile. Having grown up with the hyper-regional product as a topping for just about everything, Cotanch was eager to showcase this underrepresented food to a community of people who might be otherwise unfamiliar with it.

Now in its second season at the market, the company has grown a loyal following of New Mexicans and New Yorkers who enjoy the smoky, spicy flavors of the special pepper as utilized in Zia's dishes. We chatted with Cotanch about the importance of green chile to New Mexico, the culinary heritage passed down from his mom and why everyone should jump on board the green chile bandwagon.

How would you describe the flavor of green chile to someone who's only had, say, a jalapeno? I don't even know where to start there! It's just so rooted in my own memories and history, especially to that region. So just to start out, green chile is so special because it's really only able to be grown out in New Mexico and it's only harvested one time a year. New Mexico is a very high altitude, it's a dry climate; there's a type of soil that's produced in the Southern Hatch Valley in Southern New Mexico, which is kind of the area that a lot of the same fields grow a lot of the green chiles. It's really only able to exist for that reason.

I would describe the flavor as unmatched, flame-roasted, smoke-kissed, spicy and super addicting that just adds a huge compliment to absolutely anything. In New Mexico, you can go and literally get green chile on anything. They just kind of expect it, too. You go down to any restaurant or fast food restaurant and they load up all the burgers with green chile, pizza with green chile. My aunt used to even make this amazing apple pie with green chile! It's insane but it's really rooted in the culinary habits and cultural identity of New Mexico, and even Colorado and a bunch of other places out West too.

How did you choose what food items to use to highlight the green chile for the Smorgasburg menu? Sopapillas are little pockets of dough that you lightly fry and they kind of puff up—sopapilla means "little pillow." In New Mexico, usually they're a dessert item that you eat with honey and cinnamon sugar or powdered sugar. But there's also what are called stuffed sopapillas, which are fried sopapillas filled with chicken or carne adovada, like we do. We also have a vegetarian red chile black bean option. So you make a pot of green chile and you just kind of smother it all over, usually with cheese, and some places do lettuce and tomatoes and so forth. Stuffed sopapillas were always my favorite dish and that's a dish that is very, very region specific to New Mexico. You can't really find that any where else.

With the Frito pies I thought that was kind of a fun novelty item, which is also very delicious. You go to random gas stations or Five and Dime general stores in the middle of Santa Fe or other places in New Mexico and that's their staple. They just open up the bag of Fritos and load it up with delicious stuff, stick a fork in it and give it to you and call it a dish. So we started doing that, too, and it's kind of fun to see people walking around Smorgasburg eating out of Frito bags. 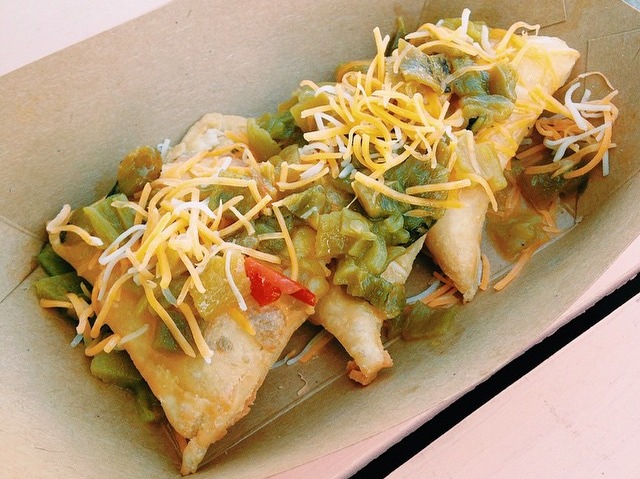 Do you make all the meats yourself? How did you come up with the recipes? Yeah, I do. I smoke all the meats the night before each market. The funniest thing about these type of recipes is that there's not a set recipe. I grew up in a very New Mexican household. I personally was born in Colorado Springs but my mom is one of 17 children and she was always making these New Mexican dishes. The food was always just part of their family and their heritage and culture and as a result of that, my mom didn't really have set recipes. She just kind of knew the exact amount of spices to add for whatever type of heat you want. She knew how to make her sopapillas fluff up perfectly.

So I tried to start off with some recipes and I would call her to try and get help, like, "Okay Mom I'm trying to make carne adovada, how much red chile should I add? What else should I add and all this?" She just told me, "I can't explain it. It just comes second nature to me." And then as a result, you kind of play around with it. I'm slowly starting to get to that point, too, where I can go and channel my inner New Mexican and have the perfect amount of everything.

The carne adovada is a slow-cooked, grass-fed beef with a lot of hot New Mexico red chile powder. I use some red chile flakes, I'll do a couple scoops of the green chile powder and so forth just cause the green chile really gives it that kick. Also a little bit of green chile flakes, maybe some cumin, garlic, obviously the right amount of salt. And to the chicken, that's more red chile-based, so I don't really add a ton of any green chile or anything to that. Just a lot of red chile, red chile flakes and so forth, and then salt to really accentuate that flavor. But yeah, I make all my meats and, like I said, the recipes just kind of come after years of being around with my mom then jumping into the fire and trying it myself and really honing it myself, too.

Unlike Tex-Mex, which is super popular right now, why do you think New Mexican cuisine hasn't been as prevalent? Well, again, the defining factor between New Mexican food and Tex-Mex or Mexican or Baja and all that is really New Mexico's very region-specific red and green chile. Since they are only harvested that one time of the year, it's hard to get them distributed worldwide. Right now, you cannot get fresh green chile. I think it's really a combination of such a region-specific thing and the crop is so rare too.

That's why I started this company, because it's very strange that you go to a place that's a hub of the world, like New York City, and you can't really find authentic New Mexican-type cuisine. On Saturday, I had this girl come up from Albuquerque and she was so excited to see green chile and then maybe five or six other people came up and they were all from Albuquerque, too. I was like, "Guys, you are all from Albuquerque!" and they all started talking and it was just pretty cool seeing them make that connection.

Josh is from Albuquerque and likes it Christmas style. We were happy to help him share #GreenChile and #NewMexico with his girlfriend from France! #NewMexicansofNYC #HumansofZia #smorgasburg

Your Instagram includes photos of people posing with a bunch of chiles. What's the significance of that?

So that batch of chiles is called a ristra. When green chiles are harvested, they eventually ripen into red chiles. With red chiles, you take pods of them and you can either crush them and use them as powder or use their flakes for culinary use. Or you could cure them then string them together into a ristra. If you walk down down a street in Santa Fe or Albuquerque or really anywhere in New Mexico, you see ristras strung up. They're decorations on all the adobe architecture and everything and it's amazing. So just seeing ristras brings back so many visual memories for anybody who has been around that area.

We just started [taking photos] a week ago and it's been really cool. You have people from New Mexico or even Colorado and they see the Zia symbol or the green chile and they just come running up because you can't find the food out here. They get so excited to see it. So we want to showcase some of these people and where they're from in New Mexico and their story behind. It's just a really fun way to try and show off that cultural love that a lot of people have and a fun way to just show who our customers are, too.

What's been the response from people, like me, who'd never had green chile before? They love it. It's just so delicious and it's amazing. It's definitely been somewhat of a challenge to educate a lot of people on what green chile is in the couple minutes or so that you interact with them at the stand. Since it's such a high volume market and everything, you can't spend a good ten minutes giving the history behind it and saying what's special with everything. So yeah, a lot of people don't necessarily understand it. "Like jalapeno or green bell pepper?" No, it's a New Mexico green chile. It's so amazing and so special. A lot of people who have come back for repeat weekends have been New Yorkers or people who have had that unfamiliar background to green chile.

Cotanch (center) and his crew on opening day this year (Instagram)

Are you planning to expand beyond Smorgasburg at some point? Yes, absolutely. I have been working in venture capital for about the past three years, ever since I moved to New York. But Friday was my last day at that job just because I want to dive a little bit deeper into this and grow the business and just work in some other relevant pursuits that all really enhance this. We definitely have a lot planned to work on expansion, we're just now starting to break into catering. We'd love to open up a storefront maybe in a year's time or so. I think there's a huge opportunity to build out physical products and start distributing them to Whole Food and so forth; you can roast green chile and dice it and then preserve it all-naturally in lime juice, garlic, and salt, then it has a shelf life of a couple years.

I've actually been at the Smorgasburg market ever since I moved to New York. I became really good friends with my friend Shiv [Puri] who opened up Bombay Sandwich Company, and I was helping him at Smorgasburg every single weekend for a couple years, which gave me this familiarity to this market. Smorgasburg is such an awesome place. You're around so many people, so many different professional backgrounds, so many different geographical backgrounds and it all comes together in a really high-energy, supportive, ambitious, driven atmosphere. Just being around it for so long it has been such an interest, a passion, and I decided it's kind of the perfect place to go and try and share this type of food, too. And we got accepted and hopefully the rest is history, right?

You can find Zia Green Chile Company at Smorgasburg on the weekends.

#green chile
#interview
#new mexico
#smorgasburg
#zia green chile company
#original
Do you know the scoop? Comment below or Send us a Tip