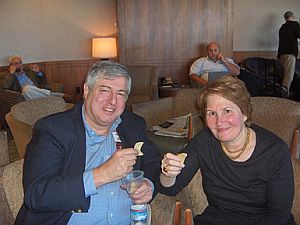 Tim and Nina Zagat, whose eponymous ratings guide started in 1979 as a two-page typed list of New York restaurants, are putting their baby on the market. Insiders peg the company’s worth at $200 million; the Times thinks the brand will prove attractive to companies like AT&T, who could use it to build exclusive mobile phone content.

Sources tell the Times that the Zagats would like to see their “fabulous brand” expand further beyond what an independent company can manage. And after churning out the guides for almost three decades, retiring with a nice multi-million nest egg probably doesn’t sound bad either.

Photo of Tim and Nina Zagat via Jaunted.