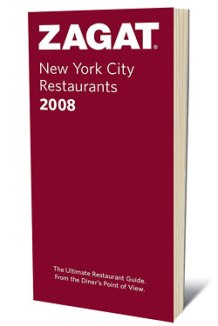 This year's Zagat NYC guide is out on the streets today. The familiar burgundy book is still a staple to many searching for the top food in the city, although many argue that the voting process leads to inconsistent results. That said, here are the numbers, the highlights, and the rest:

This year's Zagat guide is $15.95 and can be found almost at most major bookstores; information can also be accessed online at Zagat.com.