Your Pricey Shark Fin Soup May Also Include Endangered Species

Shark fin soup, a vile indulgence that can cost up to $100 per bowl, is even more evil than previously realized. A new study from Stony Brook University and the Pew Environment Group reveals that the shark fin soup served in 14 U.S. cities—including New York—contains at-risk species, including scalloped hammerhead, which is listed as globally Endangered. The study, which is the first of its kind, "used DNA-barcoding techniques to identify shark DNA fragments that had deteriorated in the fin treatment and cooking process."

As you may know, the fins collected for the soup are cut from sharks, whose bodies are then dumped back into the sea. Finning sharks is banned in U.S. waters and elsewhere, but the demand for fins remains strong, sometimes earning fishermen $300 a pound. And the practice is still legal in much of the world: approximately 73 million sharks are caught and killed each year. 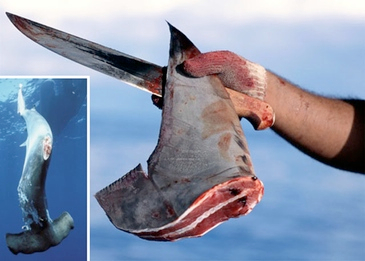 "If we overfish them too much, and they aren't filling that roll of top predators, you might have ecosystems change so much that it hurts other fisheries," Michael Heithaus, director of Florida International University's School of Environment, Arts and Society, tells the Orlando Sentinel. "You can cause big changes in the ecosystem that can be bad not just for the ecosystem but for people's dinner plates and pocketbooks as well."

Illinois and California have both banned the sale of shark fins. In February, New York State Assemblyman Alan Maisel and State Senator (and former casino patron) Mark Grisanti proposed a bill to ban the sale of sale, possession, trade and distribution of shark fins in New York. In June, a State Senate committee voted in favor of the bill, but it's still working its way through Albany's bowels. If you'd like to send a message to your representative, here's an incredibly easy way to do so.