Your Guide To This Weekend's Big Apple BBQ

It's time for Meat Weekend everybody, that glorious summer tradition when some of America's best pitmasters descend upon NYC and fill Madison Square Park with swine-scented smoke. Now in its 16th year, the Big Apple BBQ block party has once again assembled an all-star lineup of 16 pits, grilling up more pig, chicken, and cow than you could ever possibly eat in one day, especially if you're saving room for dessert, which you should do. So what to prioritize? Equally important, how can you avoid spending the entire afternoon standing on line? Here's what we've learned from several years of successful gorging. 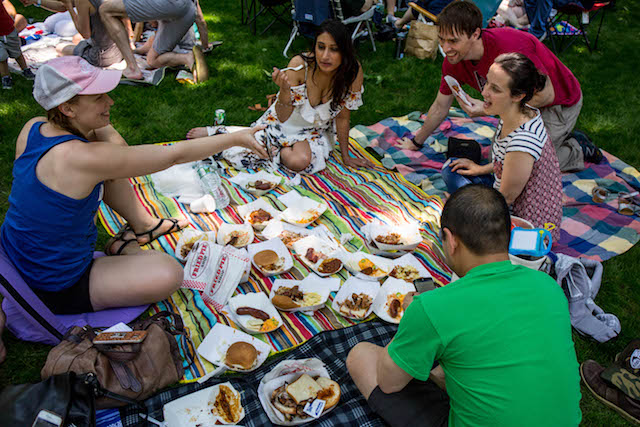 Get there early and this could be you. (Scott Lynch / Gothamist)

Go early! Really, I can't emphasize this enough. Between the opening bell at 11 a.m. until about 12:30 or so you can waltz right up to even the most popular pits and grab a plate within minutes, even without a Fast Pass. By mid-afternoon these same spots will demand at least a half hour of your time. You can also claim a prime piece of Madison Square Park lawn or bench if you get here before noon, and then just relax and drink (and eat some more, probably) all day. 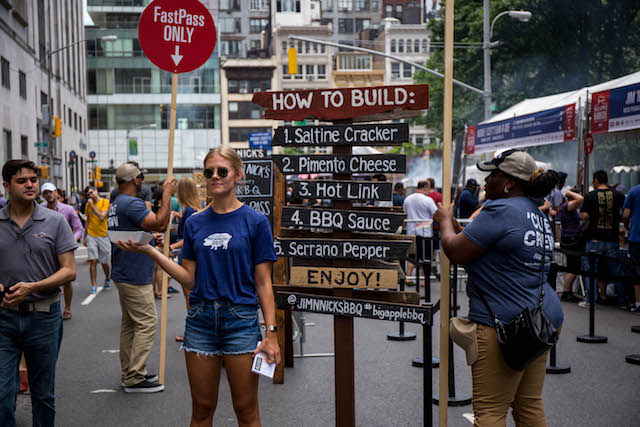 The Fast Pass is worth it. If you plan on eating more than one or two things, the Fast Pass is the way to go. It costs a hefty $125, but it's loaded with $100 you can spend on all food and booze (and merch if you're into that), and it lets you and a companion use the much-shorter VIP lines. One thing though: last year the purchase line for a Fast Pass was more than 20 minutes long by early afternoon, so again, get there early. 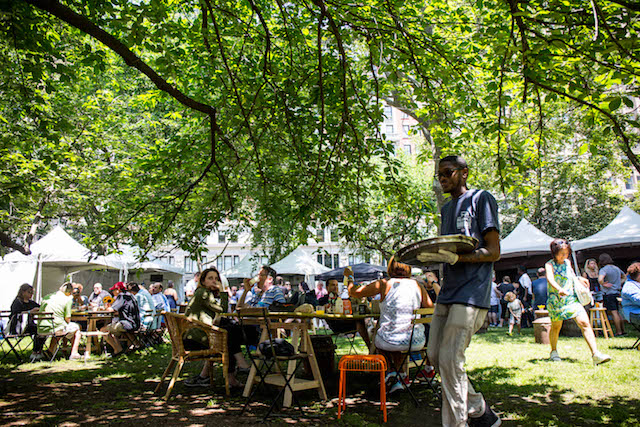 The Big Rig VIP Pass is not really worth it. For $275 you basically get a Fast Pass (which is good!) and access to a private lawn where you can stare at your phone with other Big Rigs and nibble on catered "bites" like fried chicken (which, by the way, isn't barbecue). There is an open bar on said VIP lawn, so maybe this is worth it if you want to get hammered in peace. 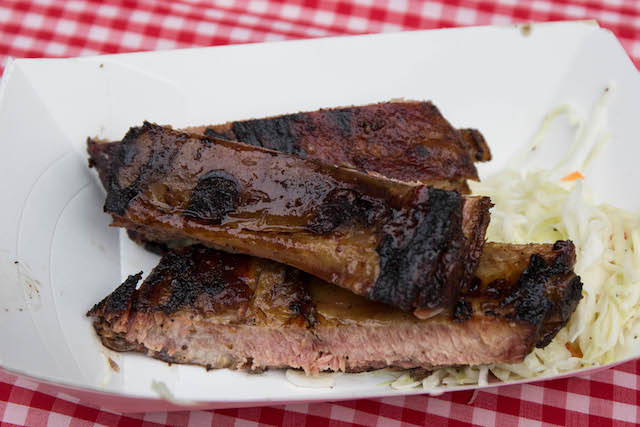 Eat the ribs. Ribs rule the barbecue world, and there are plenty of stellar options at Big Apple. Sure winners are the Baby Back Ribs (with Tangy Pit Beans) at Mike and Amy Mills's 17th Street BBQ from Murphysboro, Illinois; and Rodney Scott's St. Louis Ribs, coming to us from down Charleston way. Memphis Barbecue (John Wheeler's joint, from Mississippi), and Baker's Ribs (Joe Duncan's Dallas operation) are also solid choices. 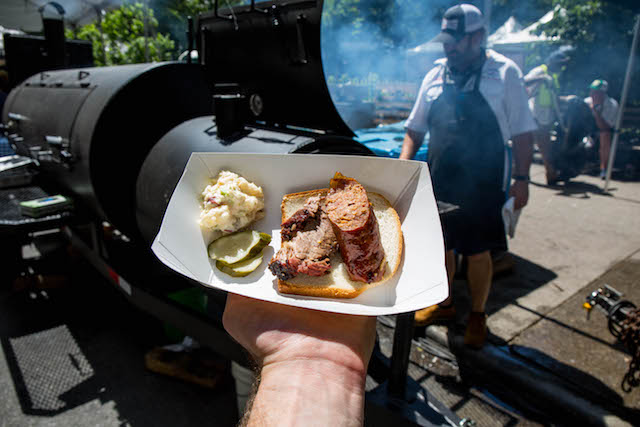 But especially eat the sausage. The single best thing I ate last year was the incredibly juicy, big-flavored Jalapeño Cheddar Sausage from Atlanta's Fox Brothers, and they'll be back again this weekend with the same excellent plate of food (you also get a bit of brisket and jalapeño slaw). The famous Salt Lick, out of Driftwood, Texas, also serves a huge, killer brisket and sausage plate, but the lines at this pit are generally at least three times as long as at Fox Bros. 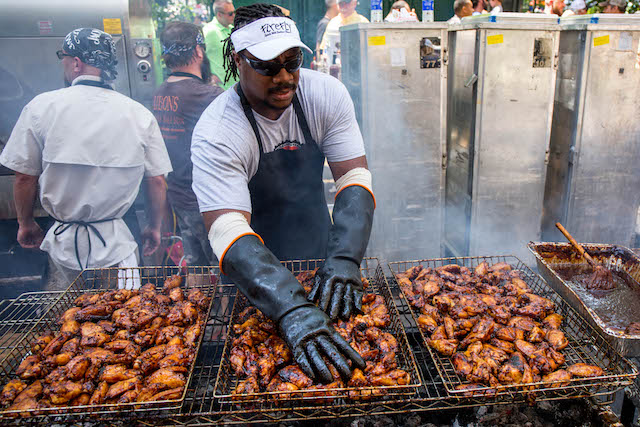 Eat chicken wings. The affable Garry Roark and Leslie Roark Scott always bring a huge crew up from Yazoo City, Mississippi to man the Ubon's Barbecue booth, which not only makes the operation extremely efficient (these lines move fast), but it also always feels like a party. This year Ubon's is firing up Mississippi Wings, served with their outstanding Bloody Mary Cucumber Salad. 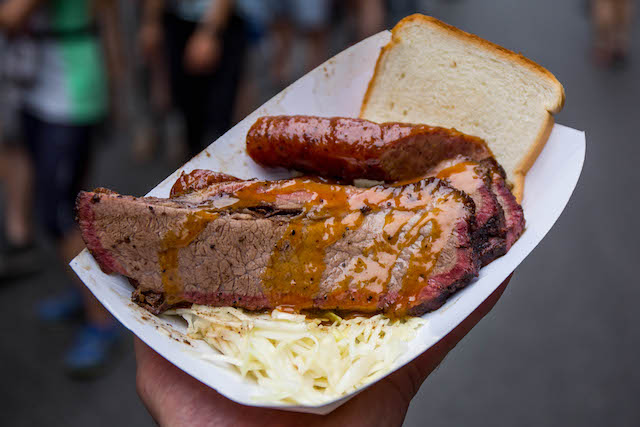 Eat local? My general rule is to waste neither time nor stomach space with food from NYC outfits, because we can get those any day, right? That said, every year I wind up scarfing down Blue Smoke's wings (this weekend Jean-Paul Bourgeois is adding Tabasco honey to the mix), and also whatever the great Bill Durney of Red Hook's Hometown is cooking up, which in this case is an assuredly amazing Chopped Brisket and Jalapeño Cheddar Link Sandwich with Queso and Tater Tots. The NYC wild card: Erika Nakamura and Jocelyn Guest, formerly of White Gold, are grilling a variety of sausages, including a kimchi- and mayo-slathered hot dog. 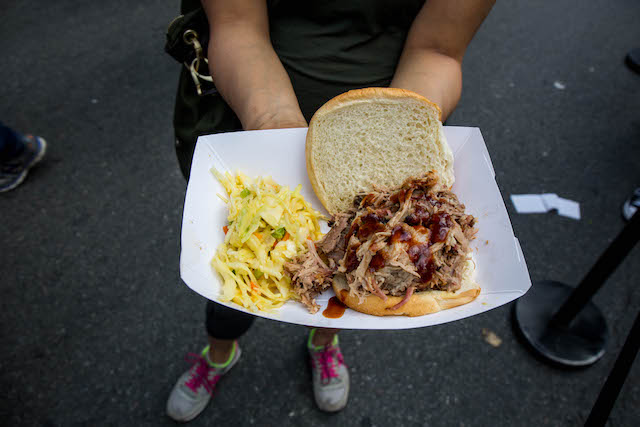 Eat whole hog. I'm not as big a fan of this BBQ genre as some of you folks (plus it's so much more filling than anything else, so it's hard to sample a lot of stuff if you start with a couple of these), but Ed Mitchell's Que, served East Carolina style, and Chris Lilly's Alabama Pulled Pork Sandwich at Big Bob Gibson's will both almost certainly make you happy. 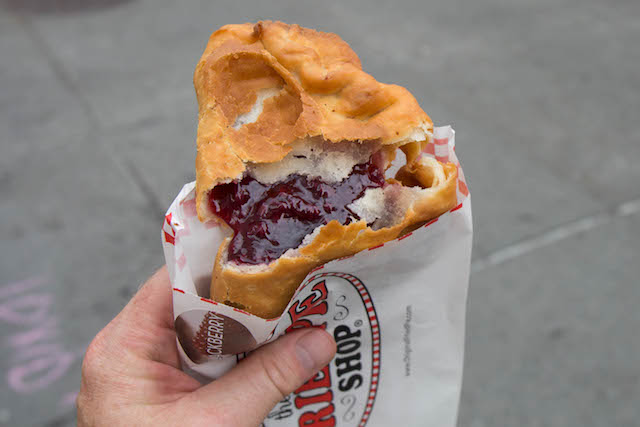 Eat dessert! After all that salt and smoke you definitely need something sweet. The enormously (and somewhat inexplicably) popular Fried Pie Shop is back again from Dallas with their fruity fried hand pies—these are fine, but the wait here every year is formidable. One possible alternative: Ample Hills is setting up shop this year with an exclusive Big Apple BBQ flavor, Creamy Corn, composed of cornmeal crumble and blueberry swirls.

But by far the best dessert at the block party is the under-loved (and thus never crowded) Sugaree's Bakery tent, where you can buy massive slices of wonderfully sweet layer cakes, including, I assume, their five-layer Rainbow beauty, arriving as ever just in time for Pride. 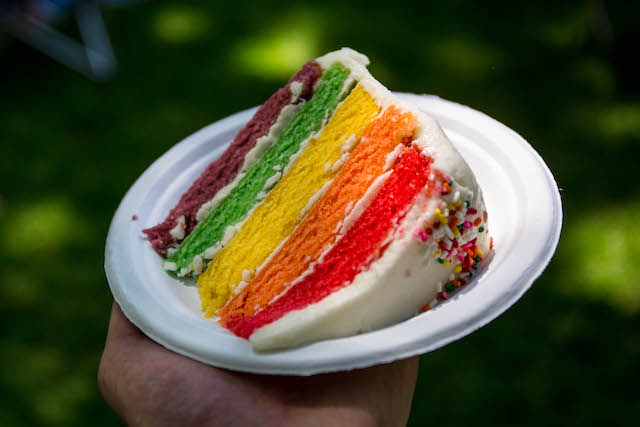 The Big Apple BBQ will be in and around Madison Square Park both Saturday and Sunday from 11:00 a.m. to 6:00 p.m. Advance Fast Pass tickets can be purchased here.