Your Guide To Oktoberfest In NYC

New York, prepare to loosen your lederhosen and dig out your dirndls for another Oktoberfest, the belly-busting German celebration of beer, brats and bretzels (also known to some as the Holy Trifecta of Satisfied Bloat). From Bowery brew parties to star-studded affairs in Astoria, there's a whole slew of hoppy hours to attend. Here are the nine best. 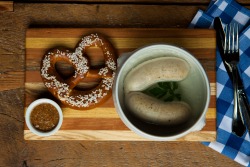 : One of the pioneering US outposts from legendary München bräuhaus Paulaner, these O.G. Oktoberfesters are ushering in their month-long celebration with a kick-off party on September 20th at 6 p.m. Featuring Master Brewer Andreas Heidenreich's hop-tastic Oktoberfest beer, as well as a special menu from Bavarian-born chef Daniel Kill, it's set to be a delicious celebration of rich malts and roasted meats. But if you're still hungry after eating those weenie-sized wursts, you also have the option to preorder large format feasts like whole duck, suckling pigs and veal shanks.

Pilsener Haus & Biergarten: Hoboken's Pilsener Haus & Biergaten is hosting a grand-scale Oktoberfest keg tapping on September 26th, complete with a lederhosen contest, themed giveaways and a mug-holding competition. Not around Jersey for the kick-off though? No worries, as Pilsener will also be hosting live music from talent like the Polka Floyd Show and Bavarski (aka NYC's self-proclaimed Bad Boys of Polka), every Friday and Saturday evening until October 25th. And while you're there, also consider ordering the crispy skin schweinshaxe für zwei weekend special, an oversized meat fist of beer-braised swine that's pretty much guaranteed to knock you out. That is, if the beer doesn't get to you first. 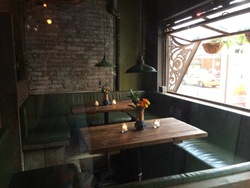 : Straight out of a Viennese symbolist dream, the fancy-pants East Village cocktail bar named after the eponymous 1950s noir is bringing a Saveur-worthy bent to your average Oktoberfest celebration. Need a break from Bro-toberfest in favor of something a tad more urbane? Order the house-cured pork belly and pickled beer mustard, as well as homemade rhubarb-infused shandies and a spicy Pomelo-weizen (which obviously comes loaded with Jalapeño-infused tequila and a gorgeous, grease-laden bacon garnish).

Blocktoberfest: Blocktoberfest, the officially sanctioned Oktoberfest fundraiser, is coming to Clinton Hill's Kelso Beer Company on September 20th. Hosted by the New York City Brewers Guild, it'll feature a huge beer garden and beers from all 20 associated breweries including Brooklyn Brewery, Sixpoint Brewery and Eataly Birreria. A deluxe VIP experience is also available for $30 and includes a special pre-seating schmooze sesh, where ticket holders can chat with the brewers, get a sneak peek at some rare brews and sample some of the best sips NYC has to offer.

Bar 21: Get your Hefeweizen with a side of history at the iconic 21 Club's less formal lounge spot, Bar 21. From September 22nd through October 31st, diners can sample Chef Sylvain Delpique's creative set of Bavarian fusion-favorites, including a pastrami pretzel BLT with pickled mustard aioli and bite-sized brats in a blanket. What's better than swanky, swaddled sausages and haute-cuisine cold cuts? 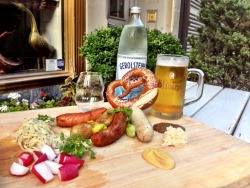 : Kurt Gutenbrunner's Austro-German meat mecca Blaue Gans is hosting a series of special Oktoberfest beer and food specials like dumplings, strudel and variants on their famous schnitzel from September 20th till the end of October. The restaurant will also be taking part in the Steuben Parade with a full-on float, so if you like frills with your franks, then this visual feast is definitely one worth checking out.

Black Forest Brooklyn: The literal lovechild of Black Forest ex-pats Ayana and Tobias Holler, this Fort Greene favorite is kicking off a month of Oktoberfest antics with an opening night celebration on September 20th, where you can expect a free beer from the traditional keg-tapping ceremony, a mug-holding competition and some funked-up Balkan brass courtesy of Slavic Soul Party.