The food lineup at Rockaway Beach this summer looks to be the strongest in years, with the return of all our most important favorites and a few key new additions that put the whole thing over the top. Here's our guide to your 2017 Rockaway Beach eats—read our thorough guide to NYC beaches here. Someday this rain's gonna end. 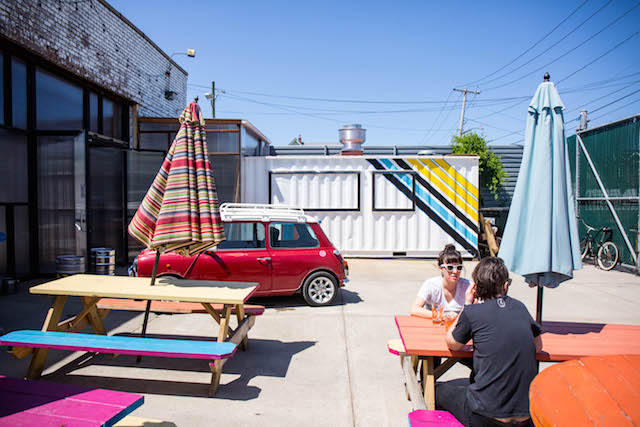 UNNAMED ANDREW FIELD PROJECT First, the biggest news is that Andrew Field of Tacoway Beach is opening a second, wholly different operation out here in a shipping container in the front lot of Rockaway Brewing Company. Field is quick to point out that this as-yet-unnamed project (the only signage so far says "Food" and "Drink") is NOT Tacos 3.0. He wouldn't reveal the menu just yet, except to say that it will open with four or five dishes and, from what I saw in the back, involve a deep fryer somehow.

Field's goal here is not to build an empire ("I have no interest in being king" he said) but rather to give some of his Tacoway Beach line cooks and crew—mostly local kids who have been with him for years now—an opportunity to learn something new and spread their wings. The space at Brewing Co., which itself just opened last June, also appealed to Field as a way to help build a community by adding some good food to the mix.

Meanwhile, Tacoway Beach is back once again, feeding the masses in the newly spiffed-up patio at Rockaway Beach Surf Club, located at 302 Beach 87th Street. Every summer for nine years now, these tacos are the first thing I eat on my first trip to the beach—I get one Fish with guac, and one Chorizo—and every year they taste even better than what I've been dreaming about all winter. In fact the chorizo version, newly chunky, may be the best it's ever been. To keep up that level of quality and commitment for such a long time, at such a hugely popular spot, is a remarkable accomplishment.

Rockaway Brewing is located at 415 Beach 72nd Street, and Field's food stand will be open in time for Memorial Day weekend. 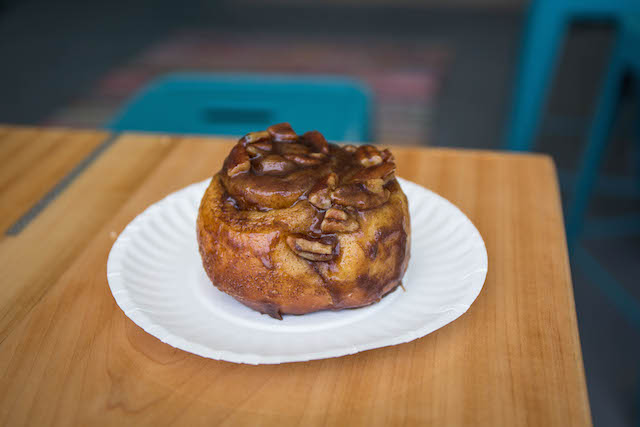 ROCKAWAY BEACH BAKERY Just down the street from Tacoway is the brand new Rockaway Beach Bakery, a cheery storefront featuring an array of excellent creations by Tracy Obolsky. Rightly famous from her various pop-ups for her croissants—get the regular, or the special (Salted Honey in my case, which was superb), or whatever sandwich she's offering—but the Sticky Buns are also incredible. Cold brew La Columbe is on tap, classic rock is on the system. This will be a fun summer project, to eat my way through Obolsky's entire menu, starting with a slice of that pie. 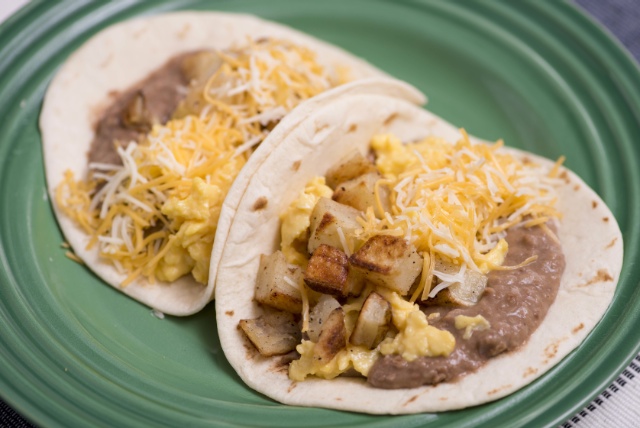 KING DAVID TACOS This Austin-inspired breakfast taco spot has been catering-only for the past year but now founder Liz Solomon Dwyer is ready to bring her egg-stuffed tortillas to the boardwalk, partnering with Rippers for a two-week stint at the burger joint. From 7 a.m. to 11 a.m. on June 1st - 4th and again June 9th - 11th, stop by the Beach 86th Street stand for three different types of breakfast tacos: the BPEC (bacon, egg, potato and cheese), the Queen Bean (refried beans, potato, egg and cheese), and Or'izo (chorizo, potato, egg and cheese).

Dwyer says they'll be offering a KDT Queso Shooters ($2), too, which is enough to cover two tacos in the molten cheese dip.

For now, it's just the two weekends, but Dwyer says they're definitely open to sticking around longer or coming back. Since Dwyer's pop-up wasn't operational on Rockaway's opening day, we can't personally vouch for them, but read more about the tacos here and judge for yourself. 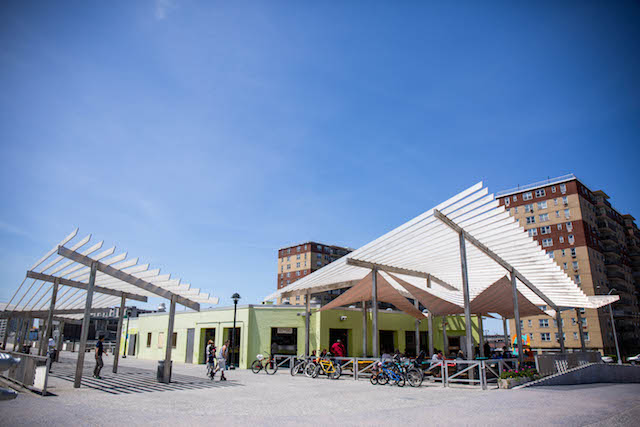 Once you get to the boardwalk, the food scene is popping. The aforementioned Rippers returns once again to their sprawling spot at Beach 86th Street, and you should expect the usual rock-n-roll attitude, plenty of partying, one of the city's best burgers, and the only soft serve by the beach.

Over at Beach 106th, the hyper-healthy, crazy-delicious Brothers is back for another season (the menu features a rice bowl, a salad, Kimchi Grilled Cheese, and an Almond Butter and Jelly Toast that I promise will blow you away) once again joining the good folks from Caracas Arepa Bar. 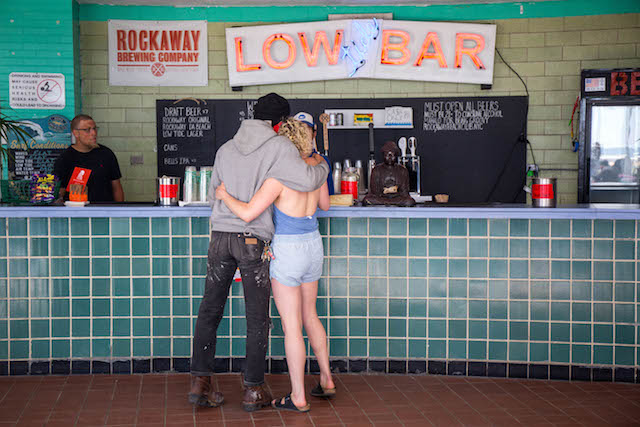 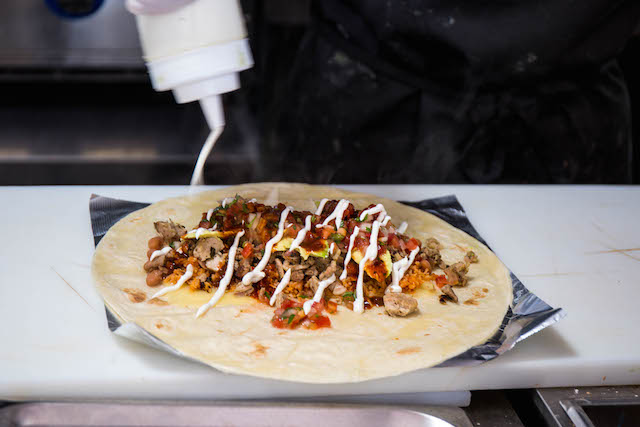 SUPER BURRITO Serving Mission-style beauties (the meat, rice, pinto beans, jack cheese, pico de gallo, sour cream, and avocado are all laid inside a flour tortilla), this friendly stand is a labor of love and homesickness from Californians Eugene Cleghorn and Sam Neely. I had the Al Pastor and it was excellent, though I have to wonder if New Yorkers are going to miss the hot sauce. There's also a Quesadilla here, a Chile Relleno, and Chilaquiles for breakfast. 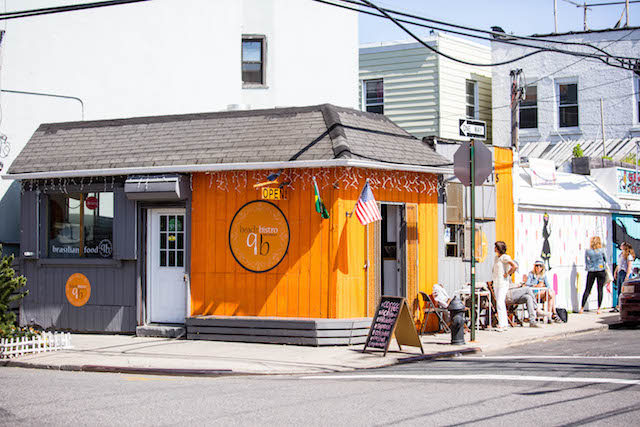 The restaurant row of Beach 96th survived the winter intact as well, anchored by the great Beach Bistro 96 with a slightly expanded menu of Brazilian delights: there are more tapiocas, more amazing sweet snacks (the Paçoca is phenomenal), and a Sunday-only special that sounds like a must: chef Carlos Varella's Bobó de Camarão, with shrimp, yucca, and coconut. La Newyorkina sells their perfect paletas next door again, and it looks like Venezuelan street-food favorite Santa Salsa will be returning to the block as well.

The beaches themselves looked wide and inviting this past weekend (and not just because they were empty), and the massive, post-Sandy boardwalk reconstruction project has been completed, with all 5.5 miles running from Beach 19th to Beach 126th Streets now open to the public.

#rockaway beach
#rockaway food
#original
Do you know the scoop? Comment below or Send us a Tip