Jacob Riis Park, located just far enough west of the Rockaway Beach boardwalk to be its own distinct entity, has most definitely joined the food-at-the-beach party. This summer the folks at the Riis Beach Bazaar, who've been handling the concessions for three years now, have assembled a stellar lineup of about 20 different vendors to feed the sun-burnt masses, all set amid the hulking, Art Deco bathhouses from the park's Depression-era beginnings. 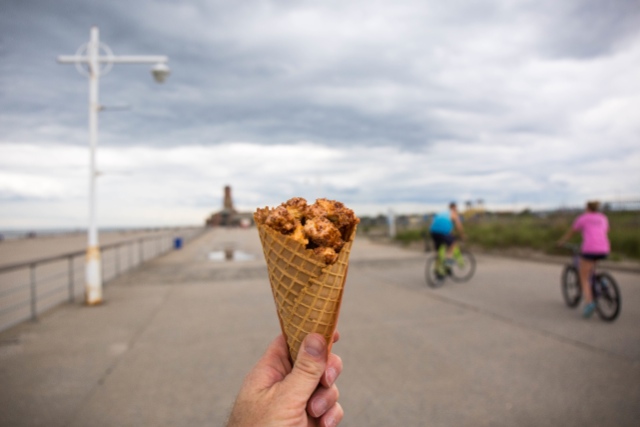 CHICK'N'CONE At the eastern-most end of the park, at about Beach 150th Street and by the spooky abandoned hospital, there were three eating options already active on Memorial Day weekend, including this new iteration of poultry in a cone. The Riis newcomers have a truck parked on the concrete boardwalk, and their juicy, just-fried chicken nuggets, topped with a lively sauce (the Kick'n Ranch was very good) and packed into a crunchy waffle cone make for a supremely satisfying beach snack. Also at "Bay 2": a Trop Pop cart, hawking frozen fruit half-covered in dark chocolate and an outpost of Coney Shack hot dogs.

Also new here at "Bay 4"* is local startup Sausage Hero, with four types of grilled tube steaks on offer, all served in a pretzel bun with a variety of toppings. Jamaican fare from Mighty Edible, coffee from East Coast Roast, and a full beer and booze bar round out the scene.

Nearby at "Bay 6" you'll find the always-welcome Ample Hills (Look for the Riis-exclusive flavor "Cherry Lime Rickey" (cherry puree, lime, vodka), plus, for Pride month only, "Baby, I Was Churned This Way"). 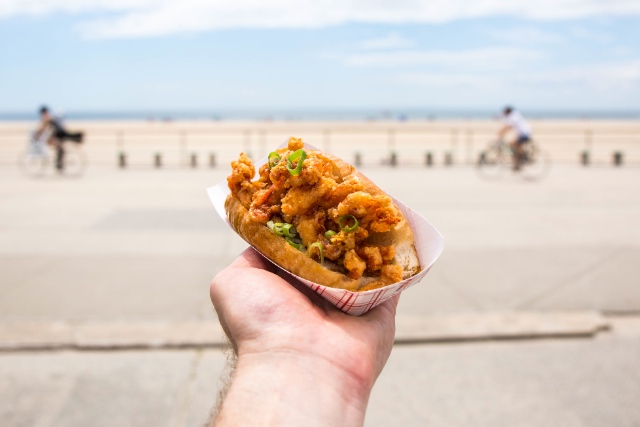 ROCKAWAY CLAM BAR The largest concession area is over in "Bay 9," [MAP] complete with picnic tables, live music, several bars, restrooms, and at least a dozen different vendors. The biggest news here is the unveiling of this new venture from Susan Povich and Ralph Gorham, the duo behind the excellent Red Hook Lobster Pound, who have a summer home out on the peninsula.

The entire menu at Clam Bar is appealing—can't wait to try the Classic New England Clam Chowder and the Clam Slam Sliders, plus there's a raw bar—but given the owners' pedigree the Fried Lobster Roll is where I had to start, and I'm glad I did. This is a genius creation, overflowing with crispy crustacean bits and doused in lemon aioli and "lobster caramel", which tastes exactly as you would expect. Delicious. 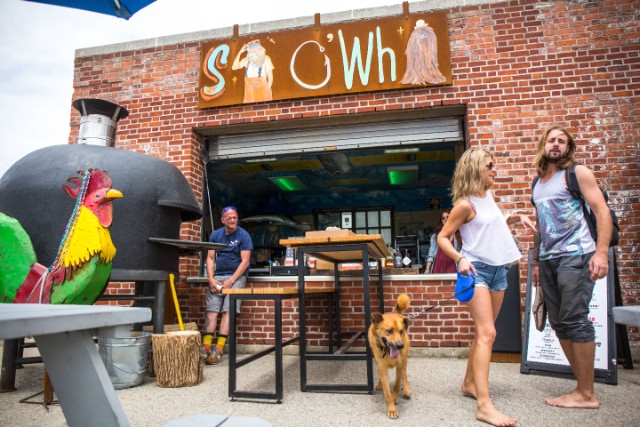 A bit farther on down the boardwalk—and cranking up the hip hop—is Slice of Whit, which of course doesn't sell slices because this is a Whitney "Pizza Nazi" Aycock operation, but DOES sell about a half dozen magnificent Neapolitan pies, including one with spicy Soppressata that I guarantee will make you happy. 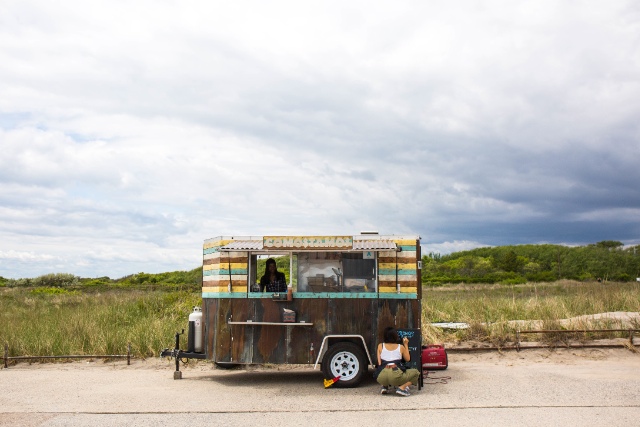 Finally, over at the western end at "Bay 14"*, Rockaway's own Cuisine by Claudette is slinging its famous "Fried Vegan Balls" (they're falafels) with hummus or quinoa. There's also an Oaxaca Taqueria truck serving Al Pastor tacos and a Big-Ass Quesadilla with three kinds of cheese, and a rustic-looking cart called Comostamos at which I had a decent boat of sauced-up Beef Nachos. There's also a bar here as well.

The "People's Beach" itself is in excellent shape, with a vast expanse of sand able to accommodate all comers, and the crumbling concrete and semi-ruins that surround the area only add personality to the place. And if you'd rather cook your own food there are dozens of grills out by the parking lot which, by the way, with its 9,000 spots, was once the biggest such car-holder on the planet.