How about that glorious Memorial Day weekend, huh? Predictably, the newly lush beaches at Rockaway were packed (and lovely!), so if you're looking to mix it up a little this summer, know that Jacob Riis Park, which begins at about Beach 149th Street, is in terrific shape as well. Riis Park Beach Bazaar's got a full slate of food vendors and other amenities on the promenade adjacent to the mile-long stretch of sand.

Riis is a car beach at its core, but getting here by public transportation is easy too; just take the A train to Broad Channel, the Shuttle to Beach 116th, and then take either the Q35 bus (there are a lot of signs pointing the way this year) or, if you can find one that works, a pedal-assist Lime bike. There are also private chartered buses and ferries if you prefer fewer transfers—the $2.75 NYC Ferry, for example, docks at Beach 108th Street, where you can hop a free shuttle to Riis on weekends.

There's a certain faded-glory vibe to the massive Art Deco Bathhouse and Central Mall presiding over the promenade, and the basketball and handball courts have certainly seen better days—and the iconic Wise Clock, built in 1891, is out for refurbishment!—but what Riis lacks in slickness it more than makes up for in charm. Always glad to see the decaying, long-abandoned Neponsit Hospital still standing, too.

Here is your complete guide to all the food vendors at Riis, new and returning, running east to west (and beyond).

Two Dudes is holding it down at BAY 2 again this year, serving loaded-up burgers, fries, and plenty of booze right near the eastern "gay beach" end of the promenade.

The stately Bathhouse, first built in 1932 and then redesigned a few years later to make it less Moorish looking, has been taken over by all sorts of vendors, with seating at picnic tables around back. Two of the best options on the beach are here: Rockaway Clam Bar, from the Red Hook Lobster Pound folks, whose superb Lobster Clamwich sandwich (which combines crisp fried clams with creamy lobster salad) offers the perfect blast of summertime flavors; and newcomer Fit Food Kitchen, a locally-run outfit with a menu of pre-packed Keto dishes that sound eye rollingly silly, but the Buffalo Chicken I ate on Saturday was large, actually spicy, truly delicious, and only 280 calories! Skip the pointless $7 Detox Waters, though.

Another excellent choice at the Bathhouse is La Cevicheria, run by the delightful Leyla and Ximena Yrala, a Peruvian couple who have been in business on the peninsula for six years. Order anything on the menu with confidence—this is a pro operation—but also know that the Quinoa with Shrimp, specifically, is refreshing, filling, and packed with flavor. There's also a new bubble tea outfit called Q Tea here, burgers and such at The Meat Up Grill, and frozen treats from Ample Hills, People's Pops, and a shaved ice stand next to the large bar.

Beach chair and umbrella rentals, a half-filled game arcade, and Camp Rockaway, at which you can spend the night in a tent right at the beach, round out the Bathhouse tenant list.

Bay 6, near the corner where the Wise Clock once stood and, we hope, will stand again soon, there's a bar (phew! it's been about 50 yards since we saw one of those) as well as a new outpost of Smorgasburg favorite Palenque, home of hearty Colombian arepas and empanadas.

The other big venue at Riis is the Central Mall at Bay 9, with lots of seating out front and a half dozen vendors lined up in a row inside. Pick hits here include Cuisine by Claudette, the vegetarian-friendly place from Beach 116th with a variety of first-rate Cauli Rice Bowls; the Smorgasburg meat-kings Carnal, here slinging Pulled Pork and Beef Short Rib sandwiches; and encore appearances by Meat Up, Ample Hills, and Rockaway Clam. And alcohol. There's alcohol here, too.

Also in the general Central Mall area is a Pizza Moto, the Brooklyn-based mobile shop that usually has pretty solid pies. Just don't order the Breakfast Carbonara, which comes covered in a slimy raw egg. Eat Mud is back with their surprisingly satisfying vegan, paleo, coconut mousse "ice cream", sweetened with dates. Seriously, it's good. Or get a chocolate-covered frozen fruit popsicles at the Trop Pops cart. As at the Bathhouse, there are bathrooms at the Mall, and a stage for DJs and live acts. 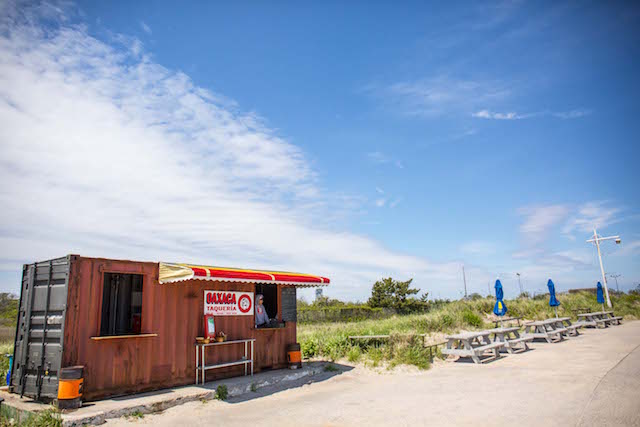 Finally, at the far west end of the promenade, just before the beaches of Fort Tilden officially begin, is a stand from the Oaxaca Taqueria chain, looking a bit like that Prada store in Marfa, all isolated and remote. The Al Pastor and Chicken Adobo tacos were pretty lackluster on Saturday, but hopefully they'll put some love into that meat as summer wears on. The Best Vendors of the Day Award goes to the two young women at Dolce Brooklyn, a tiny cart trucked in from the Red Hook parlor with two flavors of gelato, two of sorbetto—the Serious Chocolate and Mint Cucumber Lemon were both good—all scooped with exactly the amount of joy you want from an ice cream vendor on a sunny day at the beach.

Beachy outfits and accessories are on sale at various stands clustered here and there on the promenade. And there's a popular Pitch-and-Putt public golf course right off the beach, where you can play shirtless, shoeless, beer-in-hand, whatever makes you happy.

For a full Guide to NYC's Beaches — head over here. For a guide to Rockaway's food scene, you'll want to click this link.

#beach
#nyc beaches
#riis park beach
#riis park food
#summer 2019
#original
Do you know the scoop? Comment below or Send us a Tip