You Should Order The Jumbo Coconut Shrimp At 169 Bar

Welcome to WHAT'S THAT THING YOU LIKE TO ORDER AT THAT PLACE?, a new series from Gothamist where we will share with you the best thing to eat at that place we frequent or just ended up at that one time.

169 Bar, the dive located at the nexus of Chinatown and the Lower East Side, is one of the liveliest places to swill a drink in Manhattan. Tucked under a giant sign advertising a LAWYER on the second floor (there are apartments instead of an attorney there now), the haunt is replete with tchotchkes accrued over its many years in existence, from dinosaur heads to lava lamps and a mermaid figurehead, with the likes of Barbarella and Star Trek playing on the TVs above the bar.

A notorious watering hole since 1916, 169 used to be legendarily known as "The Bloody Bucket" because so many brawls broke out there. Someone got stabbed in the heart there once, and in the 1970s and 1980s, Chinese gangsters posted up there in what was "almost an open drug market," according to owner Charles Hanson, who bought the bar in 2006 with settlement money after a limousine hit him while he was on his bike.

I've been to 169 more than any other bar in New York City, in part because it's a consistently great time and they play Funkadelic and my favorite Lesley Gore song a lot. There's no shortage of characters at 169, from regulars to newcomers, you can play pool on a leopard-print table in the back, you have the option to text your order to your table, and it arguably has one of the best happy hours in town (you can snag a $3 beer and shot before 7:30 p.m.).

169 also has food, with selections you don't typically see at dive bars. Hanson hails from New Orleans, and in the spirit of the Crescent City, the menu features Louisiana crawfish and oyster po'boys, as well as dumplings and popcorn. And I'm here to tell you that one offering, the jumbo coconut shrimp, is particularly solid fuel for late nights and happy hour alike.

According to 169's menu, the toasted coconut shrimp is fried up then drizzled with orange liquor, and comes with a passionfruit nutmeg remoulade. It's crunchy, hot, and not overly sweet, and pairs nicely with a tequila soda. A resident 169 bartender recommended it to me once, and now I get it almost every time I'm at the bar and hankering for a snack. As for the price, a reasonable six shrimp for $9.

Let me be entirely clear: I'm not saying that you should rearrange your dinner plans and go out of your way to 169 Bar solely for the purposes of this sweet and salty snack (If you're looking for a pre-dinner drink though....) But the coconut shrimp is perfect if you happen to be posted up at the bar—especially on a big night out—and need a pick-me-up. It's consistently good fare that beats your typical bar counter jalapeño poppers and potato chips and, in my experience, also makes for an exceptional conversation-starter. 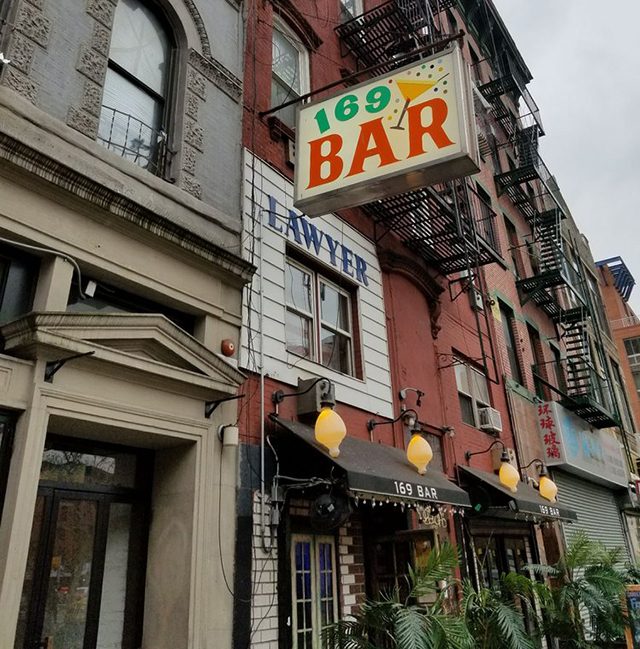 #169 bar
#coconut shrimp
#dive bar
#seafood
#snacks
#WHAT'S THAT THING YOU LIKE TO ORDER AT THAT PLACE?
#original
Do you know the scoop? Comment below or Send us a Tip