You Have Compost, Now What?

It's easy—too easy, probably—to drone on about the importance of environmental conservation while doing virtually nothing to keep the Earth from burning. Sure, you live in NYC and perhaps you don't drive, so yes, already you have a leg up on the wastrels zipping 40 back and forth to work from the Tempe suburbs.

But the true test of your (our) commitment to fighting the drumbeat of global warming is not how many lines we've memorized from Elizabeth Kolbert's latest or how vigorously we shake our fists at countries and corporations who refuse to agree to drastic emissions cuts. It's how amenable we are to adjusting to small but meaningful changes in our everyday lives.

Over the past week, the city's sanitation department distributed compost materials to Red Hook, Cobble Hill, Carroll Gardens and the Columbia Street Waterfront District in Brooklyn, as well as Hamilton Beach, Howard Beach, Lindenwood, South Ozone Park and Ozone Park in Queens. New parts of Park Slope and Gowanus will get with the program on October 26th. 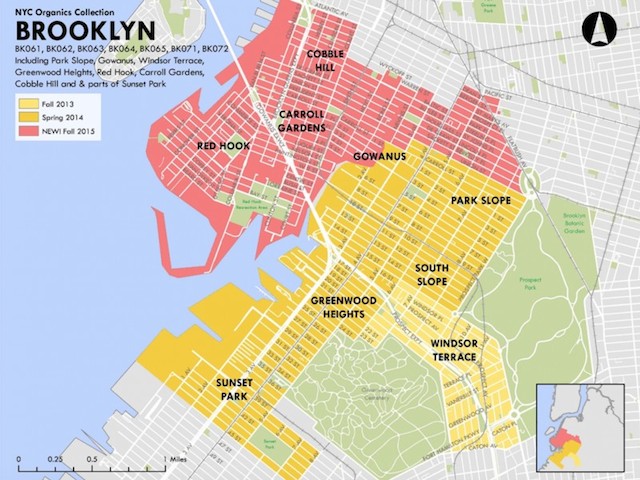 I first noticed the bins, with accompanying buckets for each apartment, dropped off outside my building on Saturday. By Monday, one of the buckets had been tossed into some shrubs by the front door. One neighbor, the type of person who burns incense recreationally and drapes scarves over lamps, regarded our bucket with skepticism: "It seems like it will smell," she said.

As our resident Native New Yorker pointed out last year, it is "morally, spiritually, and environmentally important to participate in the Department of Sanitation's Organics Collection pilot program, if it is offered in your neighborhood." He noted at the time that only 16 percent of residents in participating neighborhoods actually composted, though this year, the Department of Sanitation reports that "in a survey of pilot area residents, nearly 70 percent of residents reported participating in the program."

That's great news if it's true, but many people with whom I've spoken still seem reluctant to incorporate the extra step of composting into their daily lives. As Gothamist contributor Scott Lynch wrote when composting arrived in his neighborhood: "No getting around it, a bucket filled with banana peels, radish greens, cow fat, coffee grounds, pig bones, all stewing at room temperature for even 24 hours, is disgusting. You will want to empty your bin often."

It can be easy to forget that all of these items languish in your regular trashcan anyway, only in there, they're disbursed among other, less disgusting garbage like broken dishes and old toothbrushes. The compost buckets, though, are equipped with an effective latching system, protecting not only your nose from smells but the contents inside from insects and rats. Moreover, the DSNY picks up the compost twice each week (versus weekly regular garbage pickups), meaning that if you are diligent about emptying your bucket, you will barely have to interact with moldering food scraps at all.

There was some concern last year that the scraps would have nowhere to go, following the shutdown of the Delaware facility to which the city's compost was being sent. But no: The city now diverts the compost to a multitude of smaller facilities in Connecticut, Staten Island, the McEnroe Organic Farm, among others. So there goes that excuse.

A public hearing was held yesterday to determine whether businesses should also be required to compost, and backlash to that proposal seems more minimal than one might expect, as long as rollout isn't overly heavy-handed. And the de Blasio family has already shown us how easy and fun composting can be!

There's water on Mars, so hopefully in just a few short years we can all decamp there and leave this busted planet behind, one we've ruined and can thus discard like a cracked iPhone once the newest model comes out. (Incidentally, this practice plays no small part in the problem.)

But it's still going to be a few years before Stumptown Coffee opens its first Mars location, and there are still a few things worth sticking around for on Earth. So how about let's just give this a shot, OK?