Yes, Lobsters Used To Be "Signs Of Poverty And Degradation"

Long before couples in boat shoes lined up to shell out $18 for the buttery flesh of the Official Crustaceanal Indulgence of the Bourgeoisie, lobsters were only fit for prisoners and (of course) children. It's not some old canard: it's History. "They were considered poor people's food," says Pauleena MacDougall, a cooperating research associate for the Lobster Institute and the director of the Maine Folklife Center.

Indeed, until the mid 1800s or so, lobster was considered too plentiful and bland to be edible for discerning tastes. Indentured servants in Massachusetts, who had to work for their masters for seven years before being released of their duties, won a court judgement declaring that they could only be fed lobster three times a week.

“Lobster shells about a house are looked upon as signs of poverty and degradation,” John Rowan wrote, after visiting Nova Scotia.

Because labor was easy to come by in the Victorian era, canneries began springing up to meet a modest demand on menus. Commercial lobster fishing began between Maine about 1820 and 1850. The first seafood cannery was built in 1842 in Eastport, Maine," MacDougall says. "At one time the East Coast was dotted with canneries for canning lobster."

As demand rose, regulation on lobster catches came in the 1870s, followed by size limits in 1883. "Canneries rapidly depleted the breeding stock as they took all the small ones." With lobsters no longer as plentiful and easily caught in shallow waters, the canning industry essentially shut down in 1895. (In colonial times lobsters were reported to have been as long as five to six feet.)

"The coastal tourist industry began to market lobsters rather successfully, I think, after that," MacDougall says. And now we have our $26 rolls. Mother Jones and the History Channel both have excellent accounts of how lobster got to be so damned expensive. But we have this interesting painting: 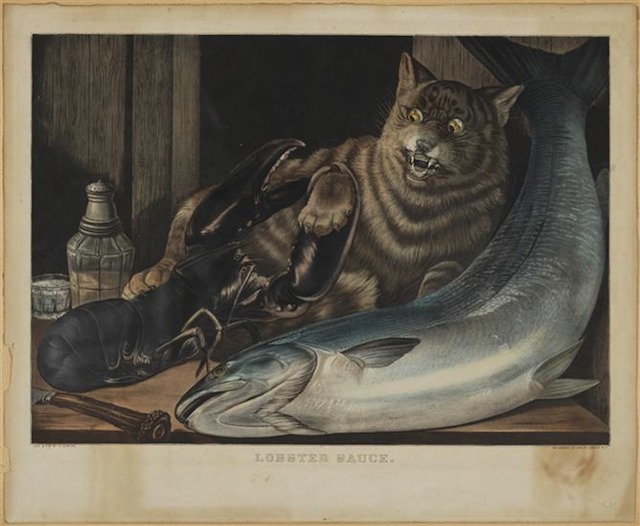 #crustaceans
#lobster
#lobster rolls
#maine
#original
Do you know the scoop? Comment below or Send us a Tip