Yee Li, a classic Cantonese mainstay in Chinatown, closed for good on Thursday after 33 years of business. The restaurant, which was once named New Big Wang, has bounced around various locations in Chinatown but its bright yellow sign has adorned the corner of Elizabeth Street and Bayard for around 15 years.

Notable for its window display of glistening ducks, pigs and other meats, Yee Li was part of the dying breed of no-frills Cantonese eateries, known especially for their lunch specials. Chinese locals refer to them as "fanding," which literally translates as rice shops.

In his 2012 review, Gothamist's editor-in-chief John Del Signore singled out the friendly staff (specifically, a smiling waiter with a "beautifully oversized melon") and one succulent dish in particular:

"The Triple Delight is prepared in a rich black bean sauce and consists of eggplant, green pepper, and tofu stuffed with shrimp balls. It's unclear exactly what makes the Delight Cubed such an addictive dish— for one thing, discovering the shrimp nestled inside the tofu and vegetables is a perpetual thrill for the palate—but over the years it's proven to be consistently scrumptious."

Last year, Robert Sietsema of Eater gave Yee Li an enthusiastic thumbs up, describing it as having "the best bowl of wonton soup in the city, the broth stronger than usual to readily flavor the massed components in the bowl."

Reached by phone, John Chan, the second-generation owner of Yee Li, said the restaurant's lease had come to an end and the family had been unable to negotiate a new deal with the landlord. He declined to say how much the rent was.

"We tried to negotiate," he told Gothamist. "We tried as much as we could."

Of having to close, he said: "It was pretty painful." 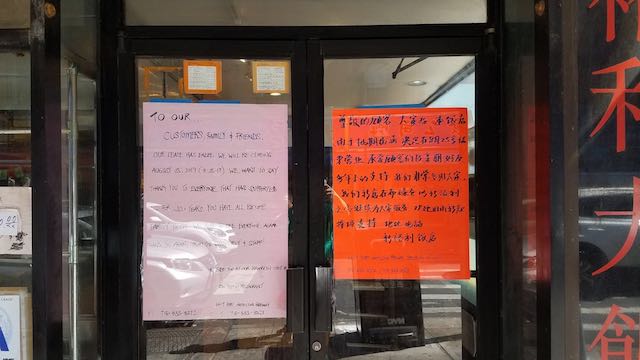 Chan, 34, started working in his family's business when he was just 14. He said there are few chefs nowadays in New York City that know the intricate and time-consuming preparation involved in making the Cantonese delicacies like roast duck and pork that Yee Li specialized in.

The family had originally planned to close Sunday, but in a cruel parting shot, city health inspectors paid them a visit on Thursday and forced them to shut down. Afterward, they decided not to bother reopening. Chan said the violation was due the fact that they were short-staffed since several employees had already quit.

The Chans are already busy with a new restaurant, which opened in January. Fittingly named "New Yee Li," it is located at 6619 Fort Hamilton Parkway in Brooklyn.

"We wanted to save the weekend to say goodbye, but I guess it was not in the cards," he said. "The thing we will miss the most is the community and the friends that we made in Chinatown."

#Chinatown
#closed for business
#rent
#restaurants
#yee lee
Do you know the scoop? Comment below or Send us a Tip