Move over ramen burger. Celebrity modernist chef and molecular gastronomy proponent Wylie Dufresne has teamed up with Jawahar Chirimar of Soho Tiffin Junction to bring you the curry burger. No, this is not just a hamburger with Tikka Masala on it, it's literally curry in a patty form. If you think that sounds weird, you're right! It is! But nonetheless delicious. We wouldn't expect anything less.

"You like chicken tikka masala but you don't want to eat it on a 90 degree day," said Chirimar, on this particular 90 degree day. "It's got the same texture, but it's easier to eat."

The curry burger, which will be unveiled on the lunch and dinner menus at Soho Tiffin Junction on June 1st, comes in four flavors: Chicken Tikka Masala ($6.29), Veggie ($6.29), Paneer ($8.27) and Salmon ($8.91). The chefs use the enzyme Activa RM (aka "Meat Glue") to bind each patty together, so there is no need to add fillers that take away from the flavor. They are surprisingly light compared to the soupy, rice-filled takeout containers often associated with Indian curries. A quick warning: though they are lighter than traditional Indian fare, do not, as I did, eat all four in one sitting because they hit the bottom of your stomach like a rock.

The Paneer burger has by far the most interesting flavor, smokey and creamy, this rich burger does not taste like anything you've ever tried. Made with paneer, a mild Indian cheese that has a tofu-like texture, and an iconic style of gravy from the Chettinad region of India, this burger is a decadent vegetarian option. 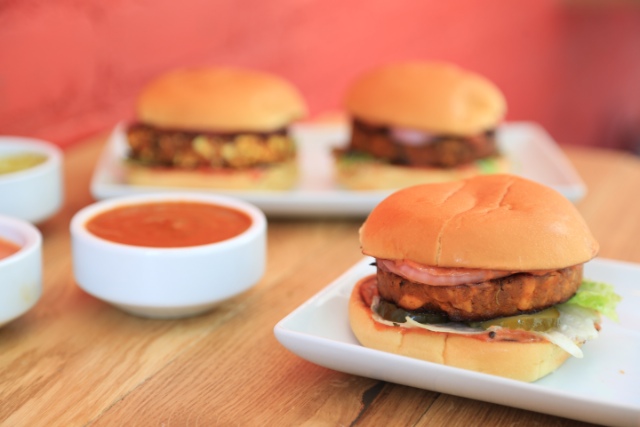 If you've ever tried to make a salmon burger at home, then you know it's no easy feat getting it to stay in patty form. Dufresne's Salmon Burger is compact, crispy on the outside and soft on the inside, and only has the slightest essence of fish. This is the salmon burger you give to your friends who say they don't like salmon.

The Veggie Burger is packed with quinoa, kale, mushroom and carrots and is served with cheddar cheese on top. The addition of cheddar is what Dufresne does best, matching ethnically different flavors together to make something surprising and delicious.

The Chicken Tikka Masala Burger is packed with spices and tastes like you're biting into the classic Indian dish. Dufresne and Chirimar wanted to create something that tastes traditional and different at the same time, and at they've succeeded.

"The thing about these burgers, the reaction when you take a bite is you don't feel cheated," said Chirimar. "You taste the curry." 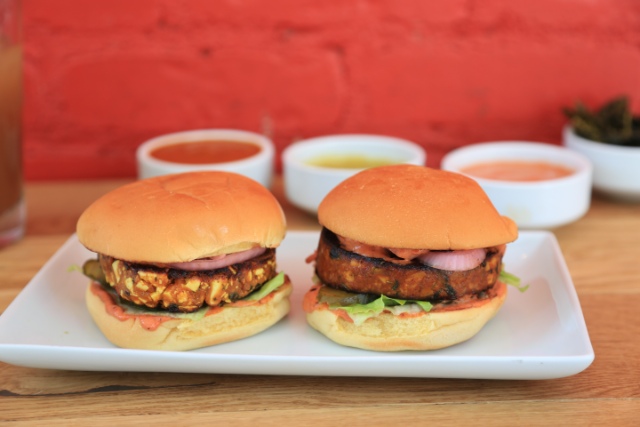 Soho Tiffin Junction, known as the Indian Chipotle of the NYU area, opened in 2014 and originally sold casual lunches in the design-your-own bowl style of its Mexican counterpart. It paired up with Dufresne at the end of 2015 and has since opened for sit-down dinners with a menu of Indian-style tapas. The menu, which mixes American and Indian classics in innovative and daring ways, is all priced under $12.

Dufresne is the former chef and owner of the acclaimed and trailblazing wd~50, which closed in 2014 when the building was purchased by developers, and Alder, which closed in 2015 for undisclosed reasons. In June of 2015, Dufresne announced he would open a restaurant in the Financial District in the new luxury hotel AKA Wall Street. According to his publicist, he is no longer opening the restaurant due to timing issues.

Dufresne has no planned end to his partnership with Soho Tiffin Junction and seems to be enjoying making his mark with various collaborations around town.

#burgers
#curry burger
#Jawahar Chirimar
#Soho Tiffin Junction
#wylie dufresne
#original
Do you know the scoop? Comment below or Send us a Tip