It's not surprising that Sugar Factory's new "Artisanal Donuts and Coffee Bar" on the Upper West Side would sell over-the-top, aggressively-photo-friendly pastries. After all, this is a restaurant chain that spends far more energy bragging about the "iconic superstars" like Kendall Jenner being spotted with their "sparkly lollipops," and making claims to being "the most Instagrammed restaurant in the world," than it does discussing any actual food you might eat here.

What we didn't expect, though, is that these donuts, as startlingly sweet as they are, would also actually be good. Created under the new regime of Sugar Factory's Corporate Executive Pastry Chef Max Santiago, who apparently caused quite a ruckus in Miami a couple of years ago with his Salty Donut pop-up, these eight giant sugar bombs are currently available only at this location and, as of this past weekend, no one seems to know about it. 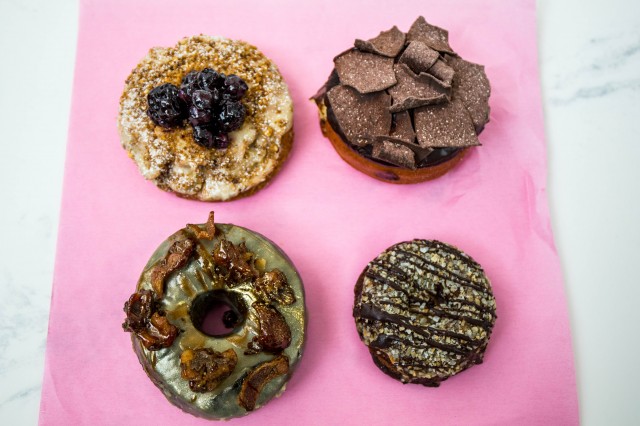 The actual UWS Sugar Factory restaurant, which opened last April, took over the old Ollie's spot across from the movie theater on Broadway (and next door to what is now the Apple Store), but the donuts are sold at a counter that fronts the sidewalk. There's also ice cream available, but it's just repackaged Häagen-Dazs or a brand called Wholesome, which is part of the Sysco food conglomerate.

There are eight donut varieties currently available, the best of which are also, happily enough, the most photogenic. The Charcoal + Maple + Bacon + Bourbon, for example, combines a couple of Instagram trends—the cake itself is a deep black from the activated charcoal; the bacon bits on top glisten with "drizzle"—but it's also skillfully crafted, with a dense and chewy base that fully supports the sweet/smoky/crispy toppings. 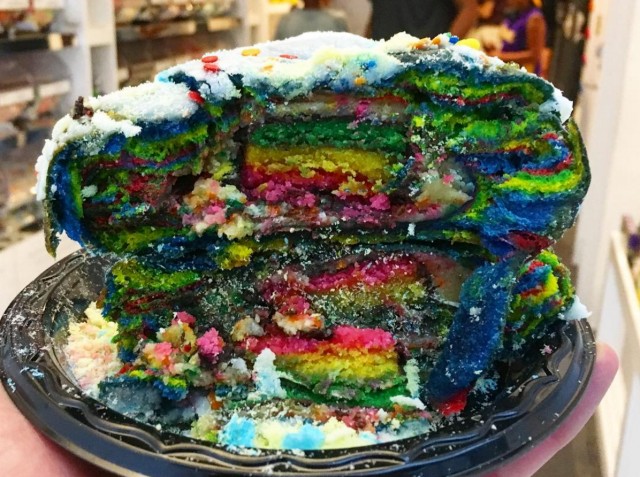 The same level of care and expertise can be found in the alarmingly-colorful Rainbow Pride (a brioche donut with cotton candy glaze); the Disco Tahitian Vanilla Bean (complete with "edible 'BLING-BLING' luster dust glitter"); and the Boston Cream, which is packed with globs of vanilla custard and piled high with dark chocolate curls. Each of these are shockingly sweet, and can easily be split between two or even three people. In fact these all make for a much better dessert than breakfast, which works out well because the Donut Bar is open until midnight.

The only real weak spot here is the vegan Baked Samoa Cookie donut, for which no amount of sugary toppings can overcome a core of bitterness. Word on the internet is that Sugar Factory will be expanding their donut operations to other locations around the city soon, including the Gansevoort Market, but for now this oddly empty cafe is the only place to get these sweet, sweet, (sweet!), delights. 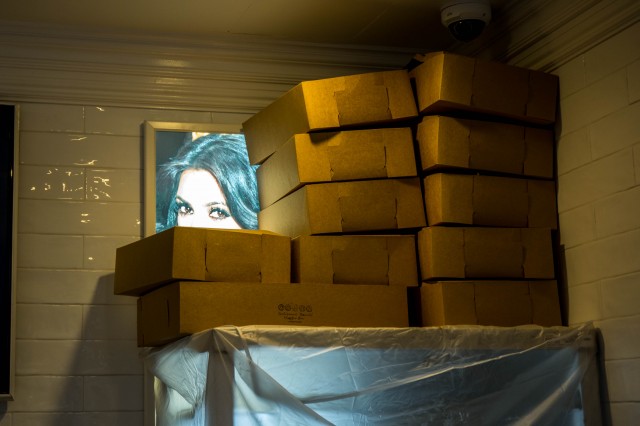 Sugar Factory's Artisanal Donuts and Coffee Bar is located at 1991 Broadway between 67th and 68th Streets and is open daily from 8 a.m. to midnight (sugarfactory.com)

#donuts
#rainbow donuts
#sugar factory
#Upper West Side
#uws
Do you know the scoop? Comment below or Send us a Tip
A new Gothamist is coming! We’ve moved comments over to our beta site. Click here to join the conversation and get a preview of our new website.