Would You Drink Wine Grown in Brooklyn?

Brooklyn sometimes feels like more of a brand than a real place anymore—hey, the artists at the Clubhouse say Branding is the new Brooklyn, so everything is just coming full circle. Brooklyn is in LA, Brooklyn is on vodka, Brooklyn is a basketball team, Brooklyn is even a restaurant in Paris. But Brooklyn hasn't been turned into a wine—yet.

Devin Shomaker, 29, was enrolled in Finger Lakes Community College in a viticulture and wine technology program last year when he got the idea to start the first vineyard in the borough. He was able to establish a 50-vine vineyard on his brother Thomas' Windsor Terrace rooftop in May 2013, which served as the test site for their new label, Rooftop Reds.

The label is just getting off the ground with a Kickstarter to raise money to relocate the vineyard to a much larger space at Brooklyn Navy Yard. We tried some of the sample wine, and spoke to Shomaker about the history of viticulture in Brooklyn, the difficulties of starting a vineyard in an urban setting, and when he hopes you'll be able to try the first bottle of Brooklyn-born Rooftop Reds.

Did you know much about the history of viticulture in the city before you started? From what I've read, there had been a lot of Italian-Americans who made wine in the early 20th century in Brooklyn.

Yeah, absolutely. There were a lot of home winemakers because of the immigrant population. And during prohibition, concentrate wine was sold from a lot of the vineyards in California because they couldn't sell wine directly, there was a loophole which said they could sell concentrated juice. So they put a recipe on the package telling everybody how to make wine but not to do it, because then it was illegal. Some of the ways people at those Western vineyards got by during prohibition was to sell juice concentrate and sell it to home winemakers who didn't have access to purchasing wine anymore.

So that's an interesting historical window into Brooklyn, but it also hit close to home. My brother is a renter, but we have an unbelievable relationship with our landlord. He's been there for close to a decade and pretty much manages the building for him, and they just have a great relationship. The landlord is Italian and he remembers growing up as a young kid and his grandfather made home wine in the basement, so when we told him our idea of doing the pilot project on the rooftop he was all about it, he wanted to come see it, he told us stories about watching his grandfather make wine in the basement when he was a little boy, it fits perfectly into what you just described.

Did that practice just die out after prohibition ended?

Yeah, I think just because of market availability that tradition has died out—the "old world" first-generation people that continued it. Now as we're getting into the second and third generations, I think some of the traditional cultural practices are being left by the wayside. Now, that's obviously not the reason why I started Rooftop Reds, but it is bringing back wine production to an urban environment that was very heavily supported by home winemakers. So that's very interesting for sure. 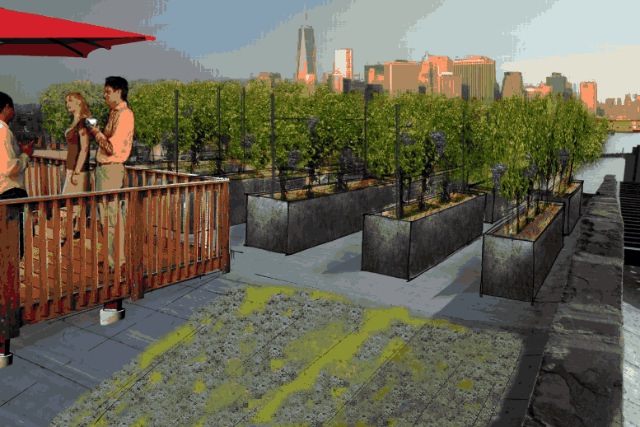 Do you need to have certain permits or permissions to be able to do this on a roof in NYC?

Yeah, we're working with Brooklyn Navy Yard, and they've identified several rooftops that they need us to structurally certify it. It's the same exact process that Brooklyn Grange went through when they established their 65,000 square foot agricultural farm at Brooklyn Navy Yard.

Brooklyn Grange has been a consultant for Rooftop Reds almost since we started, and we've built a very good relationship with them—they've invited Rooftop Reds management to do wine tastings and run wine events on their rooftop this summer. So that goes to show what we've developed with them and how we're working with Brooklyn Navy Yard tenants already and trying to create a mutual urban agricultural path.

Do you feel you're more aligned with rooftop farming, or with people making home beers and spirits?

I think we're the bridge in between. I think we're a new division of urban agriculture, just because urban viticulture has not been pursued on a commercial level. Of course, there's places that have thrown grape vines up on their rooftops, as a way to get people to read. I know Brooklyn Winery cut 24 barrels in half last season, right as we were doing our pilot project, and stuck grape vines in them on their rooftop. But it wasn't something they were doing commercially, or that they were trying to pursue and expand.

I think urban viticulture is an entirely new division of urban agriculture. We are getting into production now, but to establish a vineyard it does take three years, and we won't have that first true city vintage until 2016. This plan is very complex. In the meantime, we're also going to be producing wine up in the Finger Lakes wine region under the Rooftop Reds label. But once the urban grapes come into maturity and start producing a crop, we're going to make Brooklyn's first true city vintage, and add that to our product line as our premium cult wine.

How does the winter weather, like what we've experienced this past season, affect the vines?

We're working with metal fabricators in Geneva, NY—we've designed an urban planter which provides enough soil depth and enough soil area protection to get through extreme winters in Brooklyn. It would be too extreme up in the Finger Lakes, where we've seen temperatures dipping to -15, -16 degrees. In Brooklyn, you guys have dipped to 2, or 0, and that's the extreme for Brooklyn. The advantageous thing about being at Brooklyn Navy Yard is that there's a lot of open warehouse space, so we can actually forklift our urban planter design and bring it indoors into a non-insulated warehouse space where the vines will be protected from extreme weather events if need be. 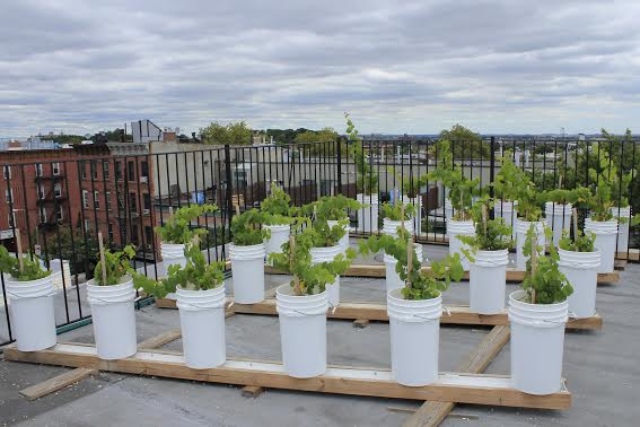 What about all the added air pollution when it's on the roof?

There have been a lot of studies in Brooklyn because of all the urban agricultural explosions. Since the Clean Air Act of 1973, the heavy metals and heavy metal toxins that were previously in urban air across the United States have really dissipated. There are many websites where you can actually go into microzones within urban environments and check where the pollution danger zones are. This is something that Brooklyn Grange has been testing on their rooftop.

I've seen their reports, and the air quality in New York City is surprisingly good. They're producing 20,000 lbs of annual crops that are consumed right away. They're not going through a filtration process, they're not going through a fermentation process that protects consumers from anything that would be toxic. So this is a much safer process than anything that people might believe.

And what about the legality?

We're able to attain a farm winery license, which is very unique. A lot of the wineries up in the Finger Lakes have farm winery licenses because they're in a rural area and they have a winery next to the vines. Unlike other wineries that are currently in the city (that are just urban wineries and only source their grapes), we're going to have grape vines in a vineyard right next to our urban winery. And that license allows us to sell our product in farmers' markets all throughout New York City. 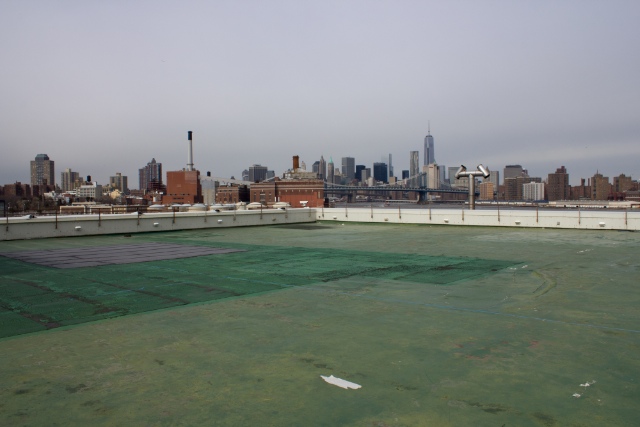 What's your approximate timeline as of now?

The harvest in the Finger Lakes is 2014. That's when we crush the grapes, press the wine, start creating the stable product. Bottling will actually happen more or less around the spring of 2015. So our whole business plan, our five-year plan shows our product coming to market in the summer of 2015 [the Brooklyn batch won't be ready until 2016]. And we already have distributors identified.

You've already done a test batch of 15 cases, which was done on your brother's roof in Windsor Terrace. How much room will you need for the first NYC commercial batch?

We have identified a 22,000 square-foot rooftop which we plan to outfit with vines in 2015. What we're doing with the Navy Yard is not only identifying rooftop space that we need to figure out and establish, but they have two vacant lots of unused industrial lot space where we're going to establish an urban vineyard on the ground as well. So we're called Rooftop Reds, we're going to have a rooftop vineyard, it might not be the first vineyard that we establish just as a result of the complexity of establishing a rooftop vineyard. But it is our pressing goal to get that up in 2015. We need to establish an urban vineyard in New York in 2015. And with the lot space they have identified for us, we are confident that we'll be able to complete that task.

I noticed on your website that besides lectures and programs, you had "services" that you do?

Just like other urban rooftop agriculture businesses, we want to be able to provide design services to companies and private building owners that want to outfit their rooftop with something that's attractive and could potentially help out with bringing in tenants or increasing the value of the building. We absolutely are open to taking the design that we've worked hard to build, to create world-class wine grapes, and speak with private establishments on outfitting their rooftops with urban vineyards. So we think it's a very attractive look that people will be into and it creates a one-of-a-kind cityscape that currently is not in use in NYC or anywhere else in the United States.

Because there's no one else doing this in NYC. I've spoken with a few people that have done it themselves for fun, but there's nobody pursuing it commercially. It takes quite a bit of knowledge, it takes quite a bit of time, and it's a labor of love. And the urban agricultural movement is not that established or old, and I just don't think that it has come up on people's radars yet beyond a hobby or a fun project.