Women Chefs Predict the Year Ahead in Food 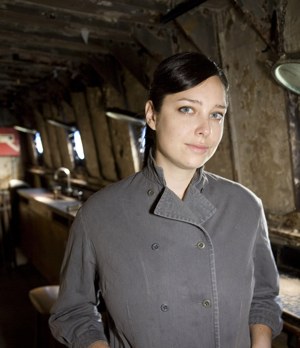 In the year 2009, omelettes and their cheesy fillings will be delivered in vaporized streams emanating from subway grates like lasers; hickory bacon vapor will only be available through the Astor 6 subway grate closest to Starbucks. Pastrami sandwiches from Katz's will travel through the city's long-abandoned pneumatic tube system to old police call boxes.

Instead of rounding up predictions like these from the Fraternal Order of Ham Lovers, we decided to ask a few of the city's female chefs and restaurant owners (and a few other food people) for their thoughts on what's ahead for the restaurant world, and the city's eating habits, for the following year. Unsurprisingly, their replies reflect a chicken-soup-for-the-broken-economy long view, but also an excitement for smaller restaurants and new approaches to food. Predictions below. Here's hoping that 2009 brings good meals to everyone's table.

Chef Amanda Cohen, Dirt Candy: "Next year, there'll be 25% off all wines at Per Se, and two for one coupons at Masa. There will also be a sudden rise in popularity for small, 18-seat vegetarian restaurants in the East Village. Three and four star restaurants will do worse as companies slash expense accounts, bonuses shrink and diners avoid expensive wines, or they'll do better because when people go to restaurants less often they'll want to splurge when they finally do treat themselves to a night out. Also, someone out there is going to rediscover Canadian cuisine. Beaver tails, reindeer, poutine, caribou. It's on its way. And more chefs are going to open smaller restaurants."

Chef Vera Tong, Dovetail: "Anita is probably right. People will continue to eat healthier food. And at the restaurant, we're also seeing a lot more dairy allergies. In general, though, we've added a tasting menu- we didn't have one when we first opened, but now we're selling about 35 a night. It gets pretty crazy. I'm cooking a lot more dessert amuse bouches, and some people are coming in just for dessert."

Chef Anne Burrell, Centro Vinoteca (formerly): "I love pork and am worried that there will be a backlash against "pork-centric" restaurants – it seems that pork belly is the new tuna tartare."

Chef Emma Hearst, Sorella: "I'm not really into food trends, but I think people will be looking to forget about their woes and have some fun. Simple, tasty food and great booze are a must. I think New Yorkers will really be looking for those non-committal restaurants that put value and quality hand in hand."

Chef Deborah Gavito, Counter: "Back to basics. That means a return to simpler times in restaurants where there are no gimmicks, just good solid food and service. Restaurants will focus on their neighborhood clientele, not tourists, and will cater to the needs of the neighborhood."

Thu Tran, Food Party: "Things go in phases. My friend went through a pie phase which I would never go through because it's too much work. I went through an ice cream phase, avocado and pistachio ice cream. I made a really eggy one. But I would like to go through a cotton candy phase in 2009. In fact, that's what I'm going to do. Maybe a nice cinnamon flavored or a cumin cotton candy."

Pat Willard, writer: "No one is going for the $1000 dinner anymore. It'll be interesting to see what happens to the very high end restaurant. Private dinner clubs or underground restaurants have captured the imagination of the DIY crowd, and that's cool. I'd like to think potluck dinners will take on a life of their own because people are understanding that hard times demand some company (I'm seeing that a lot, actually). On top of that, a personal favorite: people are more interested in how to take care of one another through food. That means not only cooking organic stuff, but also making recipes that were originally designed to feed the sick."