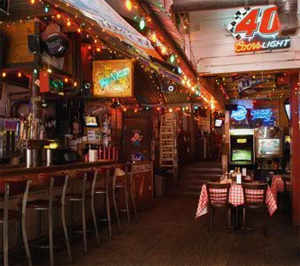 After enjoying some NCAA basketball and drinks with a client at an Upper West Side barbecue restaurant one night last March, 31-year-old Lauren Sclafani was getting ready to leave when she was suddenly engulfed in flames. As "Great Balls of Fire" played on the jukebox, the bartender at Brother Jimmy's BBQ allegedly poured 151-proof Bacardi rum across the bar and lit it on fire. Which is usually harmless fun, except this time the flame blew black into the bottle, turning it into a "flamethrower," according to Sclafani's lawyer.

In court papers obtained by the Post, Sclafini describes the incident: "I was just about to leave, and the next thing you know, I'm lit on fire. My face was burning, my hands were burning, my clothes were on fire. I was just praying to make it stop." She suffered second- and third-degree burns and spent three weeks in the hospital getting surgeries and skin grafts. The former triathlete still has to wear compression garments on her arms and gloves 24 hours a day: "My hands are terribly scarred. I can't be in the sun, can't swim, can't go to the pool to exercise, and I'm certainly not keen on going to certain types of bars."

Sclafini is now suing the Brother Jimmy's owners, who have since pulled the drink off shelves at all locations. Sclafani's lawyer says they also want the 151-proof liquor banned everywhere; he tells the Daily News, "This is a product that has no value except for this kind of purpose. One hundred proof is serious enough for anybody." A spokesman for Brother Jimmy's expressed "compassion" for Sclafini's injuries, but insisted that the establishment "is a fun, safe environment that people have come to know for 20 years."

#bacardi
#bar
#brother jimmy's
#burned
#burning
#fire
#lawsuit
#rum
#suing
#woman
Do you know the scoop? Comment below or Send us a Tip