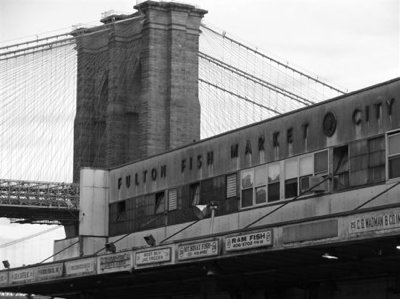 New Amsterdam Public’s Jill Slater and Robert LaValva have organized a one-day test run of a public market at the old Fulton Fish space. Called the Wintermarket, the event is part of the non-profit group’s proposal to create a dedicated market in the Seaport space, which these days makes so much sense that it almost hurts, what with everyone talking about grass-fed this and raw milk that. The concept of sustainable food has no value if New Yorkers don’t have access to it, or are priced out by things like $20 a pound fiddlehead ferns; it could rain copies of The Omnivore’s Dilemma and it still wouldn’t matter. The goal of New Amsterdam Public is not only to establish a refined, permanent market filled with local foods, but also to create a home base for a new (and equally traditional) kind of food community.

An impressive amount of local and unusual food will be at the Wintermarket, prepared and provisioned: Fleisher’s Meats will butcher an entire Black Angus steer and ice cider made from New York-grown grapes will be served. Marlow and Sons is sourcing kale and collards from a nearby Amish cooperative farm, shell beans from farmer Guy Jones, and milled oats from the Finger Lakes area. Tina Casaceli of Milk and Cookies is bringing baked goods made with wild ginger and cider molasses. Anne Saxelby will curate an eclectic selection of good cheese, and edibles foraged from Vermont bramble- including cress and highbush cranberries- will also be sold. Confirmed chefs making the rounds include a porchetta wielding Mario Batali, David Shea of Applewood, Alexandra Guarnaschelli of Butter, Caroline Fidanza of Marlow and Sons, and Patti Jackson of Centovini. This is set to be the food event of the season, and it’s free (there’s a $5 suggested donation).

Visit New Amsterdam Public’s site for more information on the Wintermarket, and also for details on the Market Meal, a mini-event taking place the same day where participants will cook a meal made entirely from on-hand ingredients. Also, check out Slow Food USA’s interview with New Amsterdam Public co-founder Robert LaValva here.