A few years ago, Williamsburg's The Bagel Store had to briefly shut down allegedly due to the feeding frenzy over its insanely popular Rainbow Bagels. The store has shut down again this week, but for a far less auspicious reason: it's been seized by the New York State Department of Taxation and Finance over unpaid taxes.

"Yes it is true, we've had some difficulties lately with the tax department, but then again I don't know any business that has been in business for a long time that has not had their share of issues with any governmental agency," baker Scot Rossillo, the founder and owner of The Bagel Store, told Gothamist.

Yesterday, several tipsters sent in photos showing the shuttered storefront with the seizure signs, issued by the NY State Department, taped across them. Public records show the store was issued three warrants on May 23rd, 2019, for a combined sum of $128,224.53.

"All the gates are down & identical signs are taped up on the other two gates," one tipster wrote. "They were always cash only, even after their fame. It was always annoying—and now it seems super shady!" 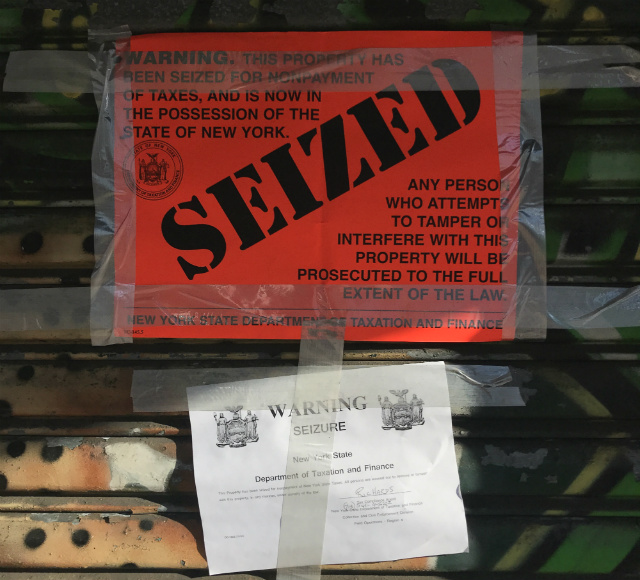 "We were in negotiations with the Tax Department via our accountant," Rossillo said. "I don't know exactly where the disconnect came from but somebody [threw] the switch on this before negotiations could actually be met. At the present time, we are trying to find a solution." He added that they'd continue to update their Instagram account on new developments.

The store, which has been opened for nearly two decades, was publishing regular social media updates filled with rainbow-colored photos up until Wednesday afternoon, when they wrote this message to concerned patrons:

Hey everyone we are very sorry we ran into major operations issue 💣 we are temporarily closed 😥 We will be open as soon as possible and will let you know via this account. We are working very hard to overcome this setback and look forward to serving you the original bagel that broke the internet. Thank you for your love and support , we can def use some great vibes right about now. 🌌✌

"I always believe in being honest, even if the truth is painful," Rossillo told Gothamist. "To repeat: we will return, we will overcome this obstacle in some form or another. We thank ... everyone for their support and their love for the Original Rainbow Bagel." He also mentioned the store was planning to relocate from 754 Metropolitan Avenue to 5th Avenue in Park Slope right before the shuttering happened.

Earlier this year, beloved West Village neighborhood French bistro Café Loup was shuttered and seized due to unpaid taxes, ultimately closing for good. The Chelsea Grimaldi's was also seized over unpaid taxes—the original DUMBO location coincidentally closed for "renovations" around the same time, and ultimately announced it would reopen as part of a national chain of the same name (it's even more confusing than that).

Rossillo told Gothamist in 2015 that the bagel industry was "boring and mundane," so he "took it to a different level," and created the Rainbow Bagel, which quickly turned into a viral sensation leading to adoring coverage, long lines, copycats, and its own spinoff—The Rainbow Heart Bagel. (They also created The Mufgel, which was part bagel, part muffin and was "the Franken-carb du jour.")

Below, you can watch a video showing the creation of the rainbow bagel: