Last week beloved supermarket wonderland Stew Leonard's (which has locations in Connecticut and Yonkers, NY) announced that they have created a Crogel, a croissant-bagel hybrid. The item is only available at their Norwalk, CT store for now, and while that's a pretty quick trip on MetroNorth, we hoped to find a similar version in the five boroughs. Success! And by success we mean derivative dead horse trend flogging forever!

Williamsburg's Bagel Store (located on Bedford and South 4th Street) alerted us to their Cragels, which are actually quite different from Stew's Crogel, as they bake a "delicate, flaky, buttery croissant" into a bagel. It is truly a hybrid, made up of 50% croissant and 50% bagel. The store's Ross Helrich told us, "Our first prototype came out this past July, it was then introduced to food aficionados and Bagel lovers in September"... that's over four months of no one telling us about these things. You guys know we have a tips line, right? Obviously, we had to try them... 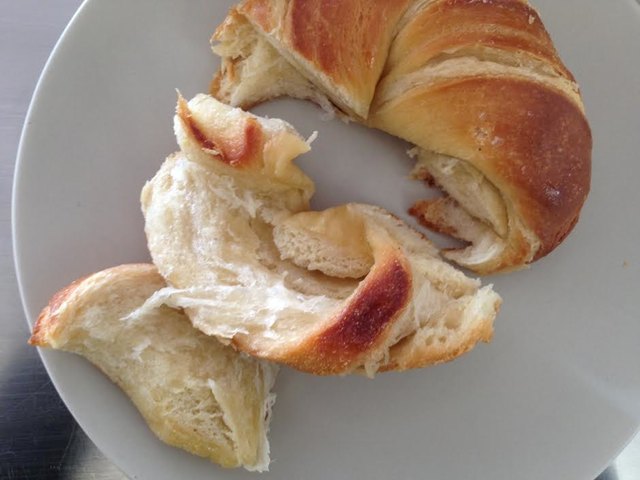 The Cragels are $2.95 each, and come in one flavor, which we'll call Classic Cragel. They're being scooped up fast, but we managed to score four before 8 a.m. today. No line. How are they? A little sweet and sticky on the outside, but otherwise they are Just Fine. We wouldn't complain if they were a little more croissant than they are bagel, but if you're more into the latter these are for you.

We got ours just as they came out of the oven, so they were soft, warm, and with a nice contrasting crispier protective layer. While reactions among Gothamist staffers were mostly measured, Lauren Evans declared: "These are delicious. In a Cronut v. Cragel smackdown these should hands-down win." We should also note that Ms. Evans mistook the butter for cream cheese, and prepared hers with a healthy serving of the spread.

#brooklyn
#cragel
#crogel
#the bagel store
#williamsburg
#original
Do you know the scoop? Comment below or Send us a Tip