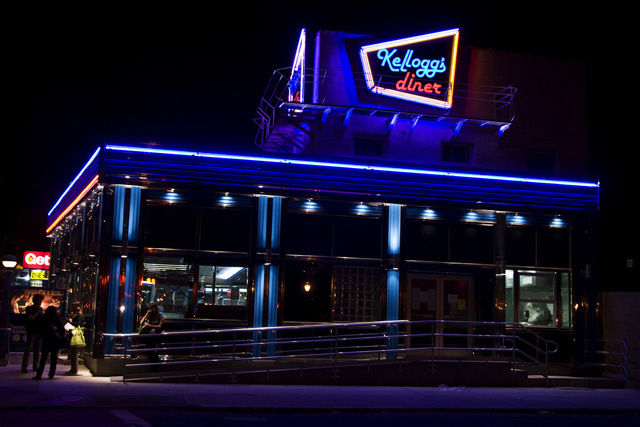 Woah, look what they went and did to Kellogg's Diner in Williamsburg! What was once a down-at-heel, 24/7 greasy spoon to which all hungry, blotto hipsters inevitably succumbed has been transformed into a 24/7 upscale diner you might actually consider eating at sober. Unless you're one of the disgruntled locals who has lived in the neighborhood for years and can't stand the slick facelift. But the food at the old Kellogg's was pretty gross, even by greasy spoon standards, and after over three decades in business, it was definitely in need of some repairs—as anyone stabbed by one of the loose springs in their dilapidated booths can attest.

It's been closed since last spring for the makeover, and is now in "soft-open" mode, according to an account by Daniel Maurer at Grub Street. He went gonzo and sneaked in last night while a video was being shot there, and reports some striking changes. For starters, the bodega by the entrance has been replaced by a lobster tank. Second, there is now a 12-seat bar in the middle of the room, where Apotheke's "mixologist" Orson Salicetti will be making those trendy artisanal cocktails everyone's drinking. Furthermore, the new Mediterranean-influenced menu features such delicacies as lamb shank.

Lobster, lamb and mixology at Kellogg's? What's next, a fancy brunch menu? Actually, Maurer says that's on the way, too.