In a message to its customers taped to the window last night, owners and staffers thanked the "solid blue-collar workers and builders, the firemen, pool and dart players, music freaks, art freaks and freaks in general, along with the new comers who knew how to behave in a bar and tip properly." They also acknowledged their acceptance of dogs in the bar, calling out their status as the "original 'Dog Bar.'"

Longtime manager Daniel Ruth told us this morning that the bar had been for sale for some time now. They decided to announce the end last night so longtime customers had a chance to come say goodbye to what he feels is "the last of [its] kind."

"When people drank there, there was a camaraderie feeling that drew people back in, it's not your typical Williamsburg beer cafeteria. As the neighborhood moves on and continues gentrification and new people move in, people seem to be migrating to that kind of drinking establishment," Ruth lamented. "No disrespect to anyone, but I recoil from them. I don't understand why people have to sit in a huge space echoing and booming everywhere with their laptops. It's just a different kind of atmosphere than we brought to the table."

There's no information yet about who the new owners will be, but Ruth confirms it will "be a drinking establishment, following in our footsteps hopefully." The building's landlord told us that the Skinny Dennis/Lucky Dog crew had been considering taking over the space, but that's not been confirmed. (Lucky Dog co-owner Bill Mack did not immediately respond to a request for comment.)

As for Brooklyn Ale House's final weeks, Ruth promises some wonderful things and hopefully customers from the early days coming back. "It'll be one hell of a night when we close, that's a true Williamsburg tradition," he told us. "We are going to close this thing down!"

Update: Lucky Dog co-owner Bill Mack has confirmed that he'll be taking over the bar when it closes. The bar will be called George and Jacks, named after Mack's and co-owner Sal Fristensky's fathers, who both recently passed away. 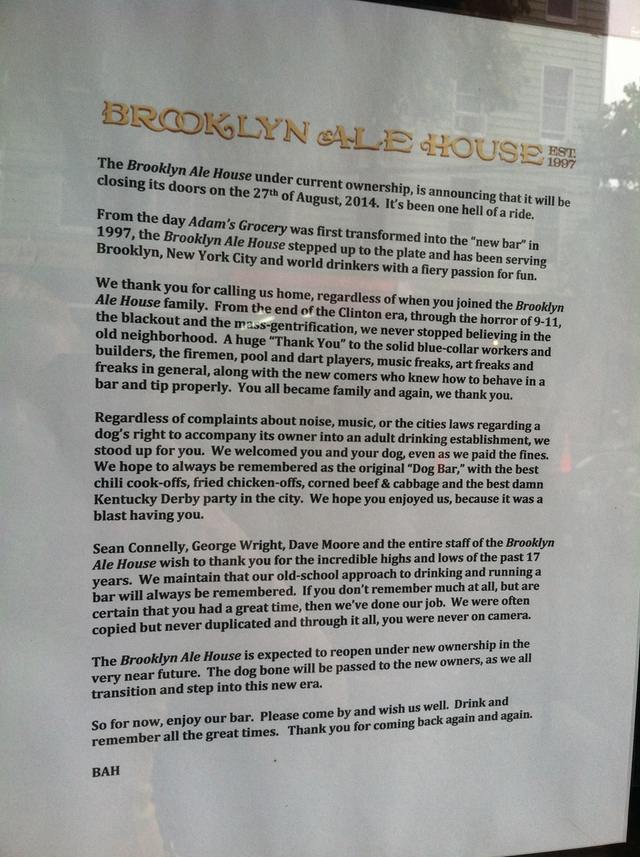 #brooklyn ale house
#dog bar
#RIP
#williamsburg
#original
Do you know the scoop? Comment below or Send us a Tip