Hello Whole Foods and bye bye Bedford Cheese Shop. Days after the latest location of the organic grocery paradise opened on Bedford Avenue, the longtime neighborhood cheese shop, located cater-cornered across the avenue, announced they were leaving their home of nearly 10 years at North 4th Street and moving to a larger location nearby. But despite the timing, owner Charlotte Kamin insists the bougie supermarket opening "didn't influence [their decision] at all."

"I never felt threatened by it, which I know was baffling, but I didn't really feel anything about it, to be honest," Kamin told Gothamist this afternoon. "At first I thought, 'Well, at least it's literally across the corner.' People are more inclined to walk across the street to get more groceries. New York has a very European, provincial model. People go to the bakery for their bread, the butcher for their meat." And, Kamin is betting, the cheese shop for their cheese.

Around August 22nd, the shop at 229 Bedford Avenue will shutter, and the team will load out machinery—they'll have to remove the front window to accomplish this, Kamin revealed—and transfer to their new home at 265 Bedford Avenue at North 1st, once home to the now-shuttered location of Khim’s Millenium Market. 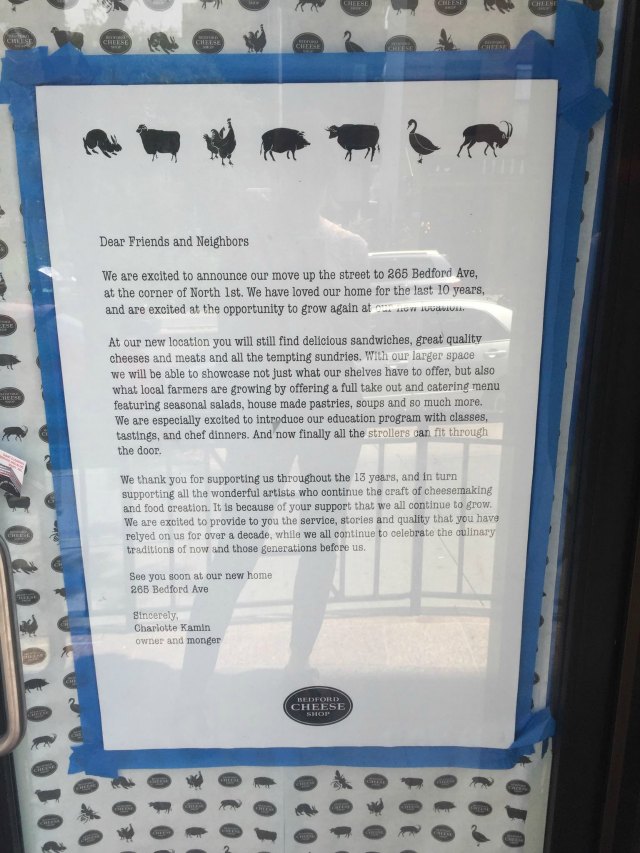 Kamin says they've been contemplating a move for about 16 months, knowing their lease would expire and awaiting a decision from their landlord about what the increased rent would be. They found the new, larger space about 8 months ago. "I found it serendipitous that we found another location on Bedford. This is now the second move we've made on Bedford and it's in our name and is karmic."

Sometime around August 29th, the new Bedford Cheese Shop will debut, with four times the amount of space as the current shop and a model that's much more similar to their newer Gramercy shop. The new Brooklyn shop will offering tastings and classes, an expanded menu of prepared foods like sandwiches and salads, and the opportunity to collaborate with chefs to throw dinner parties.

"We can't sustain with what we've been doing, knowing we need grow," Kamin says of the move.

In a farewell (for now) sign posted on the door of their current location, Kamin gives a shout out to frustrated parents and the lack of space for strollers.

"It's a response to the dozens of emails I've gotten over the years that people can't get their strollers through the door," Kamin laughs. "One of our doors is always closed, they think it's a personal attack. It's not! Now we have two spacious doors and a ramp."

The London-based, hedge fund-backed cosmetics chain Space NK Apothecary is rumored to be signing a lease on the space once the cheese shop vacates. Provincial indeed.