Williamsburg Welcomes Back Aska, A Nordic Eatery With A 'Destination' Tasting Menu You could walk down South 5th Street in Williamsburg's Southside and have no inclination that, behind a nondescript black door, is one of the borough's newest, most exciting tasting menu restaurants. Aska, which opened a month ago in the shadow of the Williamsburg Bridge, is the next incarnation of the critically-acclaimed modern Nordic eatery that first opened on the Northside in 2012. Aska 1.0 closed in 2014, but chef and owner Fredrik Berselius is back with Aska 2.0, offering a sustainable, seasonal tasting menu at $215 a head (service included, and not the borough's most expensive) that's Scandinavia by way of New York State.

We sat down with Berselius in the restaurant's back garden—where bacon smells from a nearby restaurant compete with the fragrance of beets and fresh herbs drying along the fence—to talk Williamsburg's ongoing transformation, the growing popularity of Nordic cuisines, and why the no tip movement is here to stay.

How has the neighborhood changed since Aska's first incarnation in Williamsburg? Obviously, Williamsburg has changed a lot in the last five years, or the last 15 years. Every year it's just accelerating, basically. I didn't want to do food or cook in Williamsburg because a food culture already existed, but rather find an area that inspired me in general. I liked Brooklyn, I liked Williamsburg, not very much was going on here, in my mind. There were bakeries, cafes and some restaurants...I mean Andrew Tarlow had already been around with Diner and Marlow & Sons, even though that's relatively far from where we were located on Wythe Avenue.

But of course, they and the general sort of Brooklyn vibe wanted to just look for artisanal ways, or crafty ways, of doing everything. Whether it was building furniture, making art, making music; just a similar vibe slowly growing, and it got to food as well. People going to the farmers market, people sourcing locally. We base our food on cooking with ingredients from and around New York and the Northeast, we try and source ingredients from Catskills or farms we want to build a relationship with.

In a few words, it was a neighborhood that inspired me, and also possibly, we were more in our bubble, we wanted to cook our own food, serve a certain type of food. I felt maybe like this was a neighborhood where people were willing to explore things other than just eating hamburger.

Has the food culture shifted over time, between the first restaurant and the second? Yes, between restaurants it has shifted, of course it has shifted. There are small ambitious restaurants in general out there, I think. Ambitious restaurants and some big name restaurants, and, there's construction going on every single corner. The construction happening, even though most of it is residential, often food comes with it as well. Now there are international chefs joining the neighborhood restaurants. Of course, it's the same everywhere in New York City, in every Manhattan neighborhood or whatever

I don't know if you're someone who enjoys labels on food and cuisine, but if you are and you have a way you describe your food, what would that description sound like? You need certain labels on food. I feel they're often being misused, unfortunately, but I would call our food Nordic food, Scandinavian food. Food that is based on the NY region. We try to find similarity between NY—where we are in Brooklyn, spending a lot of time in the Catskills—to what I remember growing up in Sweden and Scandinavia. We try to work with ingredients that bring back memories.

We want to work with simple ingredients but highlight their quality, find the best in simple ingredients. Our biggest asset is time, giving our ingredients time; aging them, preserving them, letting them develop, slowly cooking them, taking care of them, taking time sourcing them. The fact that it took two years to get the restaurant open, it's actually been frustrating of course, but in the end, it allowed us to be able to work with the ingredients, to let those ingredients develop flavors that restaurants can't allow their ingredients to do. You're always busy, or you can't have too much inventory and you're always prepping for the next day and the next week.

So, our cuisine is Nordic cuisine, based off of what's available in this region. Then we have a few things we do import simply because we can't get them here but we want to feature them anyway.

What kind of stuff? We get caviar from Finland, a company called Carelian. We get some King Crab from Norway. I think those are the two things we import right now. But we go up the East Coast to Maine, Vermont; that's where we get most of the seafood is from, even though you have places like Long Island and Montauk. We don't want to go South, don't want to go to the Carolinas or California, because the flavors don't match up with the flavors I grew up with, they're too tropical, they're warm water fish. Of course, we have lakes in Norway but everything is cold. 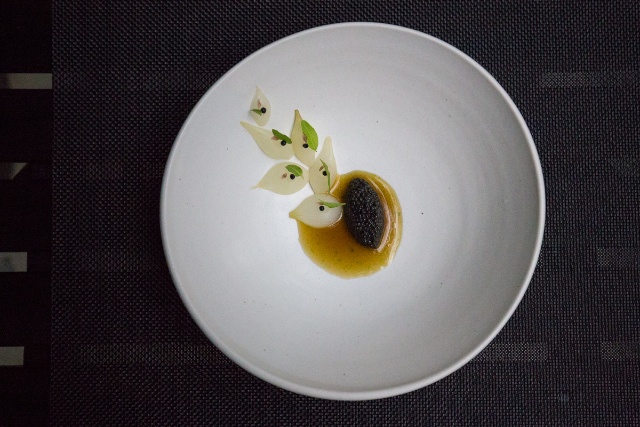 How did you decide to adopt the gratuity included model? I felt strongly about it before. It's always weird when you first come to New York, and all these gratuities everywhere, taxi driver, bartender. Honestly, I just wanted to make it simpler for the guest, so they have that squared away, they just pay, all up front. Also, it is a vehicle for us to help pay our kitchen. We've always set up the restaurant so we have more kitchen staff than dining staff. Cooks obviously make way less than front of house staff. And often they're the ones who work twice the amount of time in the day or in the week. So this is very much the kitchen-driven restaurant.

The people who work here are very passionate and dedicated and spend a lot of time inside and outside of work thinking about food, it's more than just a job. The goal is to make it a sustainable workplace, give people a sustainable salary, and the no tipping policy should help achieve those goals. It's still new, new to this accountant, new to me. I've been wanting to do it forever, but this was the first opportunity I had to actually implement it and try to get it squared away. We'll see what happens with it. It's worked so far. I think times are changing everywhere and it's going to stick around moving forward.

When you were thinking of the food you wanted to serve at the bar, was there a philosophy you were going for? The space is basically two components but three areas. Dining room, where we want to make it a gastronomie experience; you set aside the evening. We have nine chefs in the kitchen for nine tables in the dining room, basically. People travel and they come to eat here, it's more like a destination restaurant or an anniversary restaurant. A meal right now in the dining room is $215, including service, and the beverage pairing price is $115 dollars, so you walk away paying $330 per person. I know people can't do on a regular basis, that's not the intention. The intention is supposed to be a special occasion, so we can take you on a journey.

The bar is more of a place where you can pop in and meet with friends and you don't have to commit to that whole experience. I know you might have to go home and work on stuff tomorrow morning or go home and do laundry or something, so I wanted to find space where we had an opportunity to have our guests be regulars. An environment to pop over and have a glass of wine and a few bites to eat. But the food philosophy is the same. One is more philosophical, upstairs, meant to take you on a journey, but downstairs it's somewhere you can come with your friend and just have a glass of wine and a plate of food and stay for 30 minutes, or you can have 10 glasses of wine and 10 plates of food and leave after five hours.

It seems that Nordic food is something people in the food world have been cognizant of but it seems like in NYC it's having a moment. Claus Meyer is kind of taking over Grand Central Terminal; you two are doing the thing in Greenpoint with BMW. What is it about the timing with Nordic food in NY? Is there something to that or is just a coincidence?

When René [Redzepi] and Claus first started Noma, when the whole new Nordic food manifesto—even though now it's ten, eleven years in—when they or when people in the Nordic community put their finger on it, it made so much sense. Our fine dining was always French cuisine with Nordic ingredients but now we put that to a halt and rediscovered our own region and a way of cooking we've been doing all along, but had forgotten about. All of a sudden it was an abundance of flavors and ingredients that were super interesting to work with.

Then, because it can be adapted to any type of cuisine, it's like a ripple effect. Why we do what we do? Why it's happening now—is it a coincidence? No, I just think its the effect of everything else going on around us around the world, a way to cook more sustainably. It's a way to look at how we live our lives and I think, broken down in essence, a lot of it just makes sense. Why it happened in NYC right now? There's a boom in Nordic food in England, too, and places in Asia. If its not by Nordic people, it's sort of similar approach by people in their countries, in their areas. Similar philosophies, but different cuisines.