Williamsurg's Southside never took to Morgane, a Balthazar-esque brasserie that struggled for a couple of years before finally going the way of Masten Lake. It wasn't bad; the back garden was a roomy oasis and I kept coming back for the garlicky escargot, but Morgane could never compete with the ever-packed Maison Premiere a few blocks north. Now new owners have turned the location into a pseudo-rustic locavore restaurant called Wild, a growing chainlet with a location in the West Village and Las Vegas. 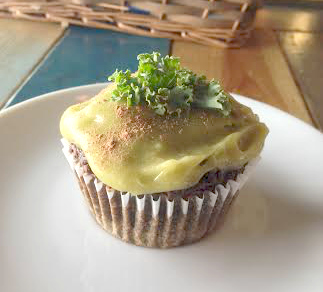 Co-owner Miki Agrawal can't eat processed food, and the menu reflects her wholesome diet: all of the pizza is made with organic, gluten-free flour, as well as hormone-free cheese, and most ingredients are sourced as locally as possible. There's one vegan pie (topped with BBQ vegan "chicken" and non-dairy mozzarella) but carnivores will find plenty to choose from, including a pie topped with baby spinach, artichoke, bacon and goat cheese.

Options besides pizza include a Black Linguini & Calamari—this one's for gluten-lovers only—as well as a gluten-free pasta served with a choice of pesto, marinara, or a la vodka. A chicken parm is made with gluten-free breading, and, this being Williamsburg 2014, there is the requisite kale caesar salad. Serious Kale fanatics will want to top this off with a Vegan Kale Cupcake for dessert.

Like its predecessor, the liquor license allows just beer and wine. The interior layout is also the same as Morgane—the spacious back garden remains inviting, while the cozy interior dining room is accented with reclaimed wood and plenty of plants, in keeping with Wild's stated mission to "honor nature."

#brooklyn
#dining
#new restaurant and bar radar
#wild
#williamsburg
#original
Do you know the scoop? Comment below or Send us a Tip