Williamsburg Gets New (And Cheap!) BBQ, With Mixed Results Our latest installment of Quick Bites brings us to Williamsburg for a so-so BBQ experience.

THE VIBE
Cash Only BBQ, which looks like a pop-up but is the real deal, is now in "soft open" mode in South Williamsburg. The counter-service spot takes over from Bistro Petit on Driggs and South 3rd, and chef Corey Cash and partners haven't really done too much to it yet. The mural commissioned by Petit remains on the exterior wall, and the awning, interior tile work, and furnishings are also all holdovers. The only Cash Only BBQ signage is a vinyl banner covering the old sign, though Cash did also paint the front red, and recently tacked up some Yo! MTV Raps trading cards inside. This is certainly a cost-effective design strategy, but it does lend a transient air to things.

Cash Only BBQ (true to its name, Cash does not accept cards) is designed mostly as a take-out and catering operation, but the stool-counter combos by the front windows provide a comfortable enough perch for a quick meal. Your soundtrack, should you stay, will be hair metal from the 1980s.

This is Cash's first restaurant—his barbecue cred stems from stints at a Virgil's in Connecticut, a Brother Jimmy's, and as a consultant to Burnside Biscuits in Astoria—and, frankly, he seems to be as excited about ramping up his catering business as he is about serving individual customers a meal. That said, Cash and his staff do hustle back there, and they're giving out free dessert, so hopefully the place lasts long enough to at least put up a proper sign. 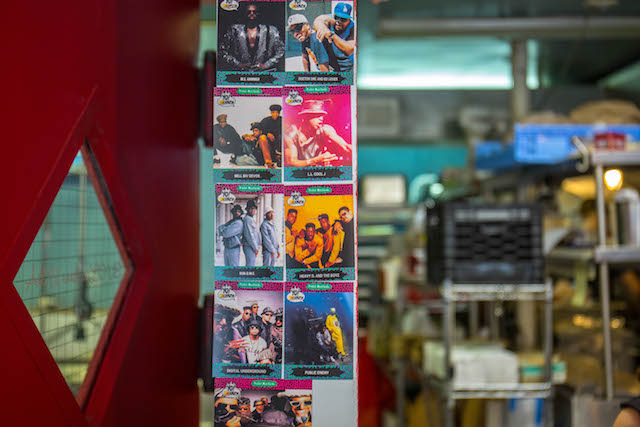 THE BITES
The menu at Cash Only is anchored by various sandwich remixes that use barbecue meat as a base. So instead of a patty melt, for example, there's a Brisket Melt, which features thick-cut slabs of unfortunately lackluster beef, melted cheese, and a sweet sauce, all between two overwhelmed slices of pressed white bread. The whole sandwich lacks punch, and quickly falls apart into a soggy mess. Much better is the BBQ Chop Cheese (apparently a nod to Chopped Cheese). It's served on a hot dog roll for some reason, but the meat is juicy, the peppers and onions still slightly crisp, and the draped-over cheese ample.

In addition to the sandwiches you can also get BBQ Hot Wings, which weren't spicy-hot at all when I had them but were reasonably satisfying and appropriately messy. Be warned, though, people who like to dine-in: there's no bathroom here in which to wash your hands afterwards, nor are wet-naps offered. The Mac Wraps are a less sloppy option, and the mac-and-cheese in mine was nice and creamy, but the pulled pork (one of three add-on options) was way over-salted. The wrap part of the dish doesn't really add any flavor or texture, either, though it does obviate the need of a fork. 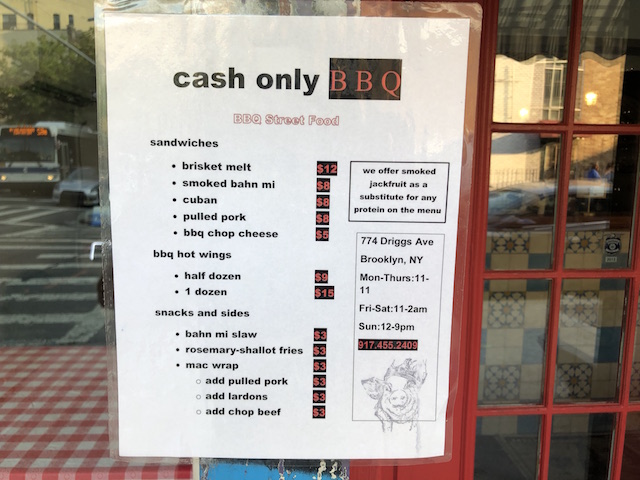 During the soft-open period (which ends this Saturday, per the chalkboard out front), Cash Only BBQ is giving out free ice cream cones topped with the sort of dessert you would normally serve in a dish or on a plate, such as fruit cobblers or, in my case, a Chocolate Trifle. The idea is fun, but with the trifle it was impossible to eat the whipped cream and chocolate pudding together in the same bite so I'm not sure the customer experience is where it should be with this right now.

THE VERDICT
Almost everything on the menu is under $10, and it all works well, conceptually, as good stoner-type food, but that last part of the equation, the actual care and feeding of people in your restaurant, still needs work. 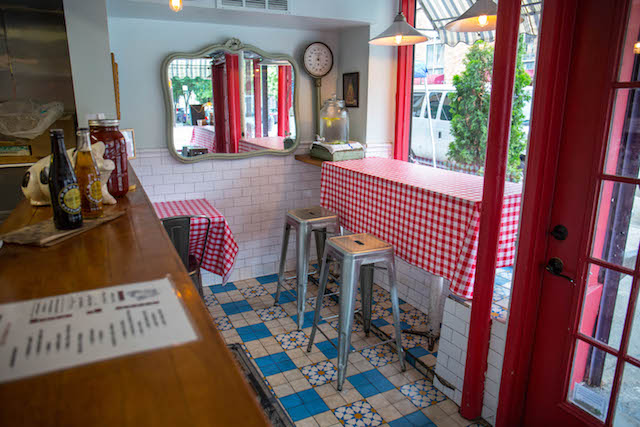 #cash only bbq
#quick bites
#williamsburg
#original
Do you know the scoop? Comment below or Send us a Tip
A new Gothamist is coming! We’ve moved comments over to our beta site. Click here to join the conversation and get a preview of our new website.