"I didn't open a Thai restaurant, I opened a restaurant that serves Thai food," Hong Thaimee says overlooking the open kitchen of her latest NYC restaurant that opened a few weeks back inside Williamsburg's McCarren Hotel & Pool. We're discussing the role of fusion on her menu, which includes a version of Pad Thai made "carbonara"-style with nubs of pork and bright yellow egg yolk. "Pad Thai has variety, Pad Thai is alive and can transform," she continues. "This is the sexiest Pad Thai in New York City!"

Thaimee's eponymous restaurant, which she runs together with business partner Matt Bruck, came together more or less on the fly. Bruck approached Thaimee about opening a restaurant in the hotel's below ground space and then, six weeks later, they officially opened. The kitchen staff, which aside from Thaimee has never cooked Thai food before, trained in about two weeks to cook dishes like the Pad Thai Carbonara and Gaeng​ ​Khiaw​ ​Wan​ ​Nua ($24), beef in a green curry that Thaimee makes at the restaurant.

Two other restaurants run by Thaimee—Ngam and Thaimee Box—are located near Union Square, where the chef stops regularly to visit the greenmarket. She'll incorporate seasonal ingredients like the mushroom and acorn squash curry and an apple-slaw topped crab cake for autumn. The Flower District's fresh markets also helped design the menu: it's where Thaimee found the fresh bamboo for her Pla​ ​Tom​ ​Mai​ ​Phai​ ($26), fish in bamboo. 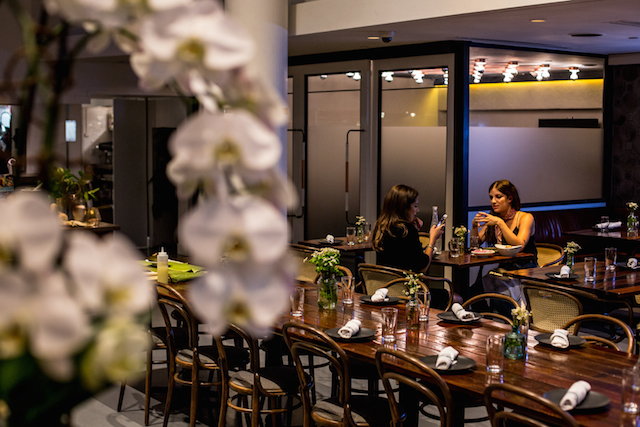 The space that houses Thaimee's latest restaurant has undergone several transformations since the North 12th Street building first opened as a hotel. The subterranean first opened as Michelin-starred chef Paul Liebrandt's The Elm before pivoting to fern bar-inspired Oleanders.

The turnover has netted Thaimee with a glut of utensils, serving vessels and wine glasses as hand-me-downs from previous tenants, but the chef isn't concerned with the remnants. "It's not about the plate, it's about what I put on it."

The bowls may be basic, but many of the dishes are arresting in both their visual appearance as well as Thaimee's devotion to chilies, which appear in many of the dishes, including a Chocolate Chili Soufflé ($9). Khao​ ​Krieb​ ​Pak​ ​Mor​, traditional steamed dumplings, make their presence known with their bright purple color, while the "Magic Noodle Salad" ($12) transforms from blue to purple with the addition to acid.