Why Is Ray Kelly At A Ribbon Cutting For An Applebee's?

This morning Dr. Mehmet Oz, Tiki Barber, and Brooklyn Nets President Brett Yormark joined NYPD Commissioner Ray Kelly in cutting a ribbon to open New York City's newest LEED-certified Applebee's on 117th Street in East Harlem. "People talk about, 'Why is the commissioner here?' " Zane Tankel, the CEO of Apple-Metro, Inc. told the large media scrum outside the restaurant's front doors. Zane was addressing what everyone was wondering: why would the second most powerful man in New York City take time out of his day to hold novelty scissors with celebrities? "Every time we open, we bring jobs, opportunities," Zane said. Later, Kelly added, "It's a business plan that we support in this neighborhood. It's a place where people can get back to work."

According to Zane, the Applebee's in East Harlem has already created 200 jobs, but perhaps more germane to the commissioner's presence was his connection to Zane and the public relations giant Howard Rubenstein. "Me and Zane go way back," Kelly said, referring to his close ties to the Federal Law Enforcement Foundation, a charitable organization founded by "a group of concerned business leaders who recognized that, despite the incalculable contribution law enforcement agents make to our quality of life, the economic protection they receive is often inadequate in the face of disaster."

Zane, Rubenstein, and Tiki Barber are all members of the FLEF's board. Kelly has been speaking at FLEF events for at least 12 years. The organization has presented awards to Roger Ailes, U.S. Attorney for the Southern District of New York Preet Bharara, George W. Bush, and Sheldon Silver, among many others.

Zane, who owns the chain of Applebee's in the New York area, said he eats from the Applebee's menu "every day," and added that his restaurants accommodate all kinds of diners: "You wanna eat healthy? Come on in. You wanna eat lousy? Come on in." A reporter asked what the commissioner ate for lunch today. "Well, we couldn't eat here because the restaurant's not open yet," Kelly replied. The restaurant was in fact undergoing a soft-opening for family and friends. The reporter pressed again. "Where did we eat lunch? We ate at the Waldorf-Astoria, you know, for the board."

Did the commissioner at least have a favorite Applebee's menu item? Was he a baby-back ribs man? Did he enjoy dipping mozzarella sticks into marinara? "I like them all, I don't have a favorite." 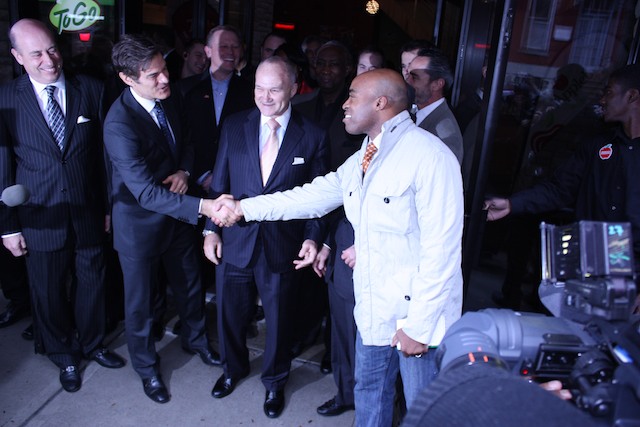 Less than a block away from the ribbon cutting, residents of 322 Pleasant Avenue stood on their stoop and said they had no idea the head of the NYPD was stopping by. "He's never come around here before," Felix Robles, the building's superintendent said. "People were saying that they were gonna have a press conference over at the Wagner Houses when it came out that NYCHA was sitting on all that money, but they never did. Instead they did that big raid, so people would forget about it."

Robles was referring to the arrest of 19 gang members in August who were caught on NYCHA cameras dealing drugs. "They're still dealing over there right now. They don't care about the cameras. You can go over there right now and pick up," Robles added.

When asked to speculate as to why Ray Kelly was visiting the Applebee's and not the Wagner Houses, Jesus Acosta, a substance abuse counselor at Bronx Lebanon shared his political theory: "It's the payola! He wants all those guys to contribute to his campaign for mayor. Why else would he come up here to see an Applebee's?"