Why Eat Anything Other Than Pizza For Brunch This Weekend?

Pizza in the morning, pizza in the evening, pizza at bruuuunch time...over at Park Slope's Gristmill, where they're slinging pies weekend days as part of their new brunch program. In addition to Smoked Salmon pies and one with potato and bacon, they're also serving up other bready creations including a selection of toasts (everything bagel and lox, for example), biscuits and gravy and their special garlic knots in everything or cacio e pepe coatings.

If the weekend brings you to the Met Breuer museum on the Upper East Side, take note that the new restaurant inside now offers midday meals on Fridays through Sundays. They're calling it lunch, but possible dishes include an Omelette with paddlefish and trout roe and a Potato and Onion Galette with sour cream and parsley, in addition to dishes like Lamb Ribs with yogurt and steak with potatoes. Maybe it's museum first, lunch and nap later. 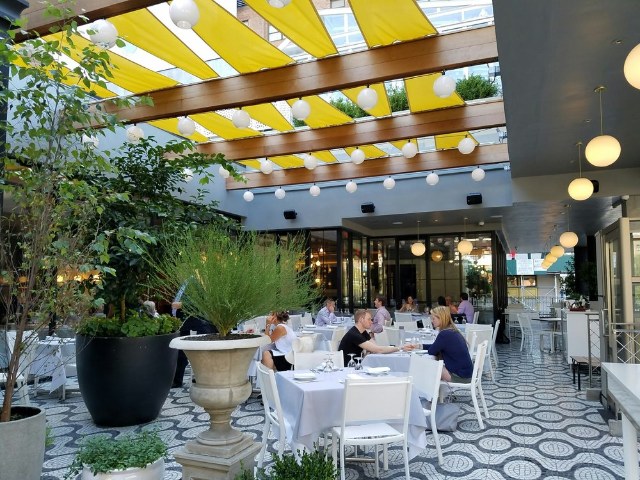 The patio at Chelsea's La Sirena will be transformed from a breezy dining spot into the Holiday Village at La Sirena beginning this Saturday. From 11 a.m. to 1 p.m. on the weekends, the patio will be decked out with dozens of Christmas trees decorated and illuminated. Santa himself will be posing for photo opps with anyone who asks and there'll be cocktails (like the Naughty or Nice with Sailor Jerry Spiced Rum, Lairds Apple Brandy, demerara syrup and apple cider) and a special brunch menu of Italian specialties, too.

Also in the Italian vein, teen chef Flynn McGarry's Sunday night edition of his pop-up restaurant Eureka transforms into Pasta Sundays beginning this weekend. The traditional weekend meal includes a pasta dish, garlic bread, sides and a glass of wine for each diner for $50, with seatings available at 6 p.m. and 8 p.m. Old Italian movies playing in the background are also lined up for the event.