It took no time at all for big changes to be implemented at Whole Foods after the company's acquisition by Amazon was finalized on Monday. Shoppers at the grocery giant's stores around the country were greeted by signs advertising price cuts on shopping cart staples including apples, rotisserie chickens and, yes, avocados.

Prices on the Hass variety of alligator pears were slashed to $1.49 each from $2.50 each. Guess millennials will be able to afford those homes after all.

Naturally, the internet was Here For This News:

Me finding out @WholeFoods dropped their price on organic avocados pic.twitter.com/ZBKhP6tuXb

On Amazon lowering Whole Foods prices…
"Items that will be marked down on Monday include organic avocados…" pic.twitter.com/rRnmLxjd5w

Amazon has single-handedly saved millennials by dropping the price of avocados at Whole Foods.

Me walking into Whole Foods after the price cut pic.twitter.com/PN0ML24xra

My brother literally never texts me back, but today he hit me up first to tell me about these new Whole Foods prices🍝🍗

And so were the in-store shoppers.

"I read about the price last week," Gwendolyn Wijninga, 26, who lives on the UES told Gothamist at the Columbus Circle Whole Foods this afternoon. "I normally get all my fruit and veg from the stands in the streets, but you can't beat this new price for avocados. I'm literally here because of the new prices." 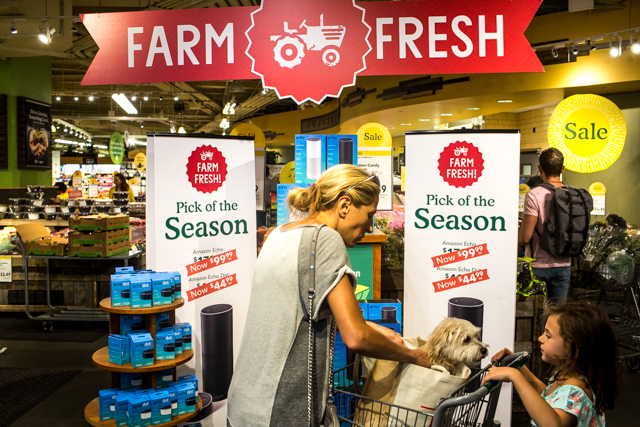 Donald Pullman, 73, strode with purpose towards the display case and plopped an Echo into his cart this afternoon, also at the Columbus Circle store.

"I didn't know it was going to be here today," Pullman explained, elaborating that he'd purchased a Dot last month but was drawn to the special pricing available at the Whole Foods today. "Like a broken drum, you can't beat it."

"He's my hero," Pullman continued of Amazon founder Jeff Bezos. "One day I'd like to go to sleep and wake up a billion dollars richer."

You are all of us, Donald, and a shining example to your generation.

#amazon
#amazon echo
#price cuts
#Whole Foods
#original
Do you know the scoop? Comment below or Send us a Tip