Who Serves Up The Worst Mexican Food In NYC?

Photo of Lobo dishes via Yelp 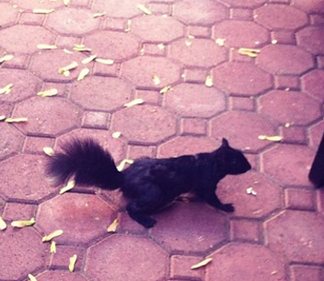 The squirrel at Lobo (Jen Carlson/Gothamist)

New York City isn't known for its Mexican food, and while you can get decent offerings (Papacitos in Brooklyn knocks out a pretty tasty seitan taco, for example), we all know that some of what passes as Mexican cuisine here is downright insulting. Case in point: a couple of weekends ago we went to Lobo on Court Street (as first timers) with some friends (who should have known better) for a meal after some light daydrinking, and it was so terrible that we still haven't been able to wash the memories from our palate.

We ordered a vegetarian mix plate which consisted of a few different items that arrived soaking in a pool of beans, and on its own special plate there was a hard circular taco shell topped with iceberg lettuce, orange shreds of pre-packaged cheese, and more beans. None of it was particularly warm. It cost $13, and a world of regret (how many calories were in this tasteless pile of mush?), but "luckily" the service was so bad that we only got to order two drinks during our hours there. One thing we'll say is that the outdoor garden is lovely (that, and the margaritas seem to keep this place going), even if that squirrel with patches of hair missing is allegedly always there (we call him Patchy).

We're probably never going to have the best Mexican food here, but it doesn't mean we can't avoid the worst of the worst. So, below please put your votes for the best and worst Mexican food joints in all five boroughs, and we'll compile a guide of where you won't get Lobo'd. (P.S. chains like Taco Bell don't count!)