The venerable White Horse Tavern, which has been serving drinks since 1880, is set to unveil its new menu on Tuesday evening following weeks of renovations. The former no-frills bar will also have an updated menu. While they used to offer buffalo wings, jalapeño poppers, and tuna melts, they'll now be serving up oysters, grilled lobster, and pork and prune terrine. They'll still have a burger on the menu, but it'll cost you a little more (the website's previous menu had the burger at $12, and the new one will cost $16).

The intention is to "turn it into a first-class gastro pub," as new proprietor Eytan Sugarman recently told The NY Post. "We are keeping prices accessible, but the dishes will be elevated,” he said. “The tavern wasn’t known as a food-driven place before." The paper also notes that the chef behind the new menu is Ed Szymanski, formerly of the Beatrice Inn. He told the Post that he looked through the New York Public Library's massive trove of recipes, particularly from the 1920s and 1930s, when putting together the menu. "It’s a humble and honest restaurant," he said. "We’re not planning on deviating and turning it into a super trendy place."

On Monday, Sugarman told Gothamist over email, "Chef Ed Szymanski and I have been working very hard to create a menu here at The White Horse Tavern that both satisfies the appetite of the community while still staying true to some of the original offerings."

When we walked by on Monday morning, the White Horse—which had been covered with paper for weeks during the renovations—looked like it's almost ready to open for business. The paper was gone, though from the outside it's hard to say what is different. However, we did spot a copy of the new menu propped near a window, which includes cocktails such as Palomas and Gin Rickeys priced at $15, a $9 Scotch egg, and grilled lobster for $28. (Beers are reportedly staying at the same price.) 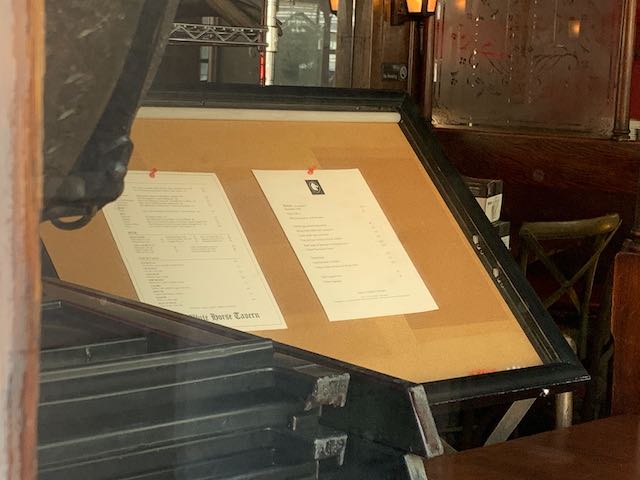 The menu is propped up in the window. (Jen Chung / Gothamist)

It's unclear what all of this will mean for the community that gathered around the bar. Many White Horse regulars came by during the daytime to clink beers, have lunch, and chat before leaving in the evening, when a different crowd rolled in. These days, the White Horse doesn't open until 5 o'clock, and many locals have relocated to another nearby bar.

Earlier this year, the bar—a former haunt of longshoremen and literary figures alike—was sold to the infamous landlord Steve Croman, along with the rent-stabilized apartments above it. Croman recently did a stint in prison for tax and mortgage fraud, and agreed to pay $8 million in restitution to former tenants. Sugarman, the new leaseholder for the restaurant, has several establishments around the city, including the ritzy Midtown steakhouse Hunt & Fish Club, the barbecue spot Southern Hospitality, and Made in New York Pizza, whose curled pepperoni recipe has been the subject of controversy.

Since news of the White Horse's sale broke, West Village locals have been worried changes might come to the historic bar—some even held an "Irish wake" before new management took over. Sugarman has held that he has "no intention of making any dramatic changes" save for fixing "what needs to be fixed," as he told the State Liquor Authority Licensing Committee of Community Board No. 2 at a meeting back in March. At the same meeting, he also commented that he wanted to make "a little bit of a better burger," presaging the menu changes we're seeing now.

#bar
#eytan sugarman
#gastropub
#reopening
#steve croman
#white horse tavern
Do you know the scoop? Comment below or Send us a Tip