Where To Observe National Lobster Day In NYC On Thursday

National Lobster Day arrives but once a year (in 2017 it's this Thursday, June 15th) and in recognition of this date we've compiled a list of some special deals and our favorite ways to eat lobster in NYC. Stay tuned for next week, when we bring you the Best Lobster Roll content you've been waiting for.

Le District The Poissonnerie section of this giant French food hall in Brookfield Place will be selling their lobster rolls on a discount for this week's holiday. Stop by anytime on Thursday for a $15 basket that contains a lobster roll and potato chips, which they'll be offering for just $18 for the rest of the summer. The market also sells whole fresh lobsters ($14.95/pound) for you to try your hand at steaming or baking the crustaceans at home. 225 Liberty Street, Battery Park, 212-981-8588; ledistrict.com

Red Hook Lobster Pound Owners Susan Povich and Ralph Gorham debuted their Rockaway Clam Bar in Jacob Riis this summer, complete with a fried lobster roll. Now the Red Hook original is getting into the fried action with a beer-battered lobster roll that they created in conjunction with Sam Adams. You can only get this special roll ($22) on June 15th; otherwise, a trip out to the Rockaway peninsula awaits. 284 Van Brunt Street, Red Hook, 718-858-7650; redhooklobster.com

Luke's Lobster There are Luke's all over the place these days, which makes it a lot easier to score one of their excellent lobster rolls if the mood strikes. Their rolls ($17) include both butter AND mayo, with flavors of lemon and their proprietary "secret seasoning" on top. They've also recently begun serving lobster tails, too, which they serve cold with lemon butter for dipping. Multiple Locations; lukeslobster.com

McCarren Hotel & Pool A quality lobster roll's enough reason to play hooky for an afternoon, but add a pool? Those "I'm feeling under the weather" emails just write themselves. Head to this Williamsburg hotel for their Maine Lobster Roll ($17)—lobster, celery leaves and truffle aioli on a Balthazar bun—and chillax poolside for the day. A pool day pass for a weekday is $55 for non-hotel guests. 160 North 12th Street, Williamsburg, 718-218-7500; mccarrenhotel.com

City Island Lobster House Don't be overwhelmed by the enormous menu: just head to the Lobsters section and keep things simple. Choose a size—starting at 1 1/4 pounds for $24.95 up to 2 pounds for $39.95 (and they sometimes have 3-to-6 pound lobsters, too)—and wait for the bright red beauty to show up at your table. Don a bib, as tradition dictates, and get crackin'. 691 Bridge Street, City Island, 718-885-1459; cilobsterhouse.com

North River Lobster Company Why be stationary while eating lobster when you can be motoring around the Hudson while eating lobster? Sails used to be free but now cost $10, sadly, but once aboard you can purchase the Captain's Special Maine Lobster ($38), which comes with 1 1/4 pound lobster, corn, roasted red potatoes, vegetables, lemon wedges and herbed butter on the side. They also offer 1/2 a north Atlantic lobster, chilled, for $20. Pier 81 on West 41st Street and the Hudson River, 212-630-8831; northriverlobsterco.com

Lobster House Joe's With two locations, this seafood-centric Staten Island restaurant is a go-to for big lobster dinners, whether that means whole lobsters steamed or boiled, lobster tails, and even stuffed lobsters. The Lobster Dinner (MP) is served simply with lemon and plenty of butter; get it stuffed with crab meat and bread crumbs for an extra $5.99. 1898 Hylan Boulevard, 718-667-0003 and 4707 Arthur Kill Road, 718-227-0003, both on Staten Island; lobsterhousesi.com

Just in case you need a refresher: 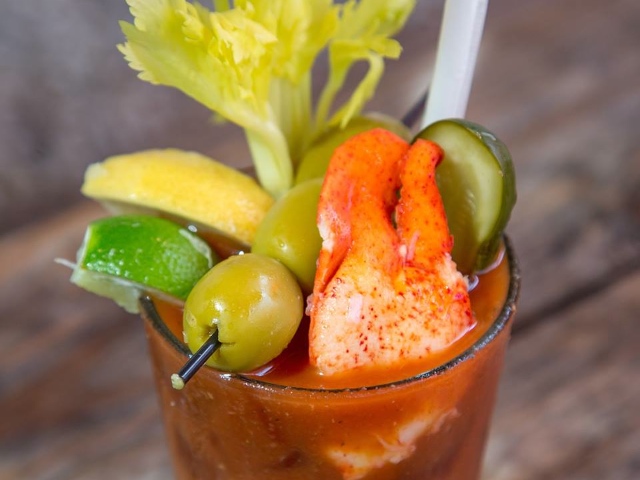 Lobster Ravioli: The big draw at East Harlem's Ricardo Steakhouse is, obviously, the steak. But don't sleep on the restaurant's Lobster Ravioli ($26), which comes bathed in a delicate vodka sauce. The plump pasta pockets are stuffed with a mixture of lobster meat, shrimp, and scallops, which gives the filling great texture. 2145 2nd Avenue, East Harlem, 212-289-5895; ricardosteakhouse.com

Lobster Poutine: There are more than a dozen poutines on the menu at The Gentry in Greenpoint, but for our purposes here we'll focus on the one made with lobster. The restaurant's "French & Maine" offering ($18) takes a page from the lobster bisque playbook by topping crisp fries with the seafood soup and adding shaved gruyere cheese to the proceedings. 592 Manhattan Avenue, 718-383-3490; gentrybistro.com

Lobster Tom Kha Toothsome noodles and tender chunks of lobster swim in a spicy and sour broth at Dale Talde's eponymous Talde eatery in Park Slope. The stew ($18), which has origins in Thailand and Laos, gets more richness courtesy of coconut milk, which bathes the rice noodles, seafood and vegetables in a velvety embrace. Pops of corn complement the natural sweetness of the lobster. 369 7th Avenue, Park Slope, 347-916-0031; taldebrooklyn.com 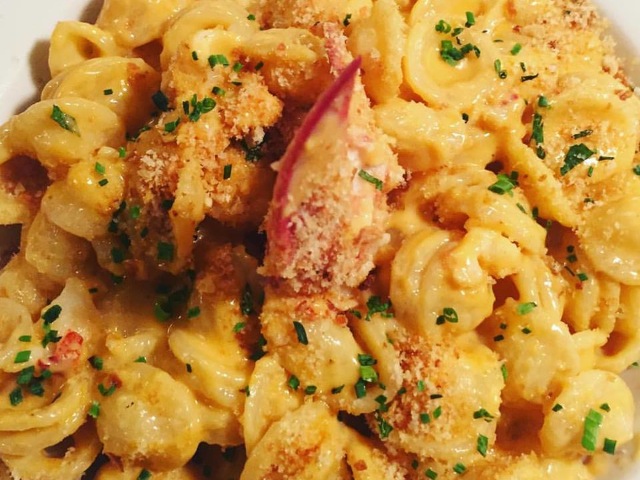 Lobster Mac & Cheese Pasta cups holding velvety cheese sauce. Toasted breadcrumbs, crunchy and salty. And lobster, chunks of it, perhaps even making a rude gesture. That's what awaits at Ed's Lobster Bar in SoHo, where they're serving lobster in pretty much every classic permutation you can imagine, including Mac N Cheese ($20). 222 Lafayette Street, 212-343-3236; lobsterbarnyc.com

Lobster Newberg A version of this unique lobster preparation has been on the menu at Delmonico's since 1876, so you'll be dining on a bit of NYC history as well as indulging in the decadently creamy dish. Split lobster comes doused in a cream, egg, butter, brandy and cayenne sauce, ready to be plucked from the shell and devoured with haste before the cream sauce cools. 56 Beaver Street, Financial District, 212-509-1144; delmonicosrestaurant.com

Lobster BLT Chef Rob McCue's Upper West Side gastropub The Fat Monk has added a Lobster BLT ($26) to its summer menu, timed to debut around National Lobster Day. Deep water Maine lobster seasoned with parsley and Pernod butter joins the usual suspects in a BLT. On the side: triple fried chips and a backyard brine pickle. 949 Columbus Avenue, Upper West Side, 212-837-2334; thefatmonknyc.com

Stir-Fried Lobster You have to be in-the-know to get the crowning jewel at Mandarin Court in Chinatown: the off-menu lobster. Order any other entree from the menu—there are dozens of shrimp applications, plus scallops in Szechuan style, fried squid with spicy salt, and clams with black bean sauce—and you'll be able to order two lobsters for $30. Pick a sauce (scallion and garlic or ginger and scallion are a few options) and they'll deliver two lobsters, chopped up, stir-fried and doused in sauce to your table. 61 Mott Street in Chinatown, 212-608-3838; goldenmandarincourtny.com

#lobster
#national lobster day
#original
Do you know the scoop? Comment below or Send us a Tip