Oysters: they're not for everyone, but if they're for you, you'll want to clear the decks for this weekend's National Oyster Day festivities, which features numerous oyster-centric celebrations and special deals around town, most of them on Saturday. Scroll down and slurp it up:

Camperdown Elm, the new Park Slope restaurant named for a tree, observes the holiday with $1 oysters during happy hour from 5 p.m to 6 p.m. Score them either at the bar or at the outdoor seats. 441 7th Avenue

Blue Fin in Times Square and Atlantic Grill East on the Upper East Side, both members of the BR Guest hospitality group, will employ "specialty pricing" all day on Saturday. The former is offering Prince Edward Island Mermaid Cove Oysters with Heirloom Tomato & Watermelon “Pearls” for $3 each, while the latter will serve you the same oysters with Apple and Salmon Roe Mignonette at $24 for a half dozen. 1567 Broadway // 1341 Third Avenue

Steakhouse Blu on Park, located just at the beginning of the Upper East Side gets in on the oyster action with $1.50 oysters on Friday (note that this is NOT on National Oyster Day) from 11 a.m. - 10:30 p.m. The oysters are only available at this price in the restaurant's bar area. 116 East 60th Street 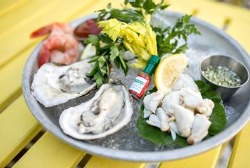 Over in Williamsburg, The Regal does the neighborhood a solid with $1 oysters on Saturday from 6 p.m. to 8 p.m. and then again for the late night set from 12 a.m. to 1 a.m. 163 Hope Street

Down on Ludlow Street on the Lower East Side, Hotel Chantelle will feed you $1 oysters Thursday and Friday from 6 p.m. to 8 p.m. No deals on Saturday, unfortunately. 92 Ludlow Street

Bar-A-Vin, located inside the big French food marketplace Le District by the Hudson River in Lower Manhattan, will be offering $1 oysters from 3-5 p.m. on Saturday. Brookfield Place, 225 Liberty Street

You won't get special pricing but you will get special oysters on Saturday at Midtown's Ocean Prime. Restaurateur Cameron Mitchell will be "flying in ultra-luxe Pemaquid Oysters" from Maine for the day's festivities, which also include live shucking in the Lounge section of the restaurant. 123 West 52nd Street

If none of those options appeal, try heading out to Governors Island or one of these recommended fish spots or just gaze out into Jamaica Bay and know that the oysters are out there somewhere.

#national oyster day
#oyster roundups
#oysters
#original
Do you know the scoop? Comment below or Send us a Tip