Where To Find The Five Best Latkes In NYC

Latke season is upon us, people! Hanukkah starts on December 20th this year, and with it comes the glory of fried potato pancakes. For those who flunked out of Sunday school, a brief reminder of the history of the edible tradition: the oil used to cook latkes is symbolic of the oil used to keep the Second Temple in ancient Israel alight. Of course, potato pancakes aren't just a Jewish thing: they're hugely popular as a secular dish across Eastern Europe (fun fact: they're the national dish of Belarus!), Germany, and even Luxembourg. Wherever you are, the key to a killer latke is grease: fry your cakes up in plenty of hot oil, then have toppings sweet (applesauce) and savory (sour cream) at the ready. If you (understandably) don't want to fill your house with grease, hit up the epic latke cook-off this Monday at BAM, or check out these five restaurants instead:

Barney Greengrass: The off-menu pancakes at this 100-year old Upper West Side Jewish restaurant are only available on weekends (and every day during Hanukkah), but they're worth a Sunday morning trip even if you don't live in the neighborhood. Barney's pancakes are made from scratch and fried to order, reasonably sized, and held together with a healthy dose of grated onion and matzoh meal.
541 Amsterdam Avenue, $8.50

Christina's Restaurant: For a more Polish spin on potato pancakes, head to this Greenpoint institution. Their crispy cakes, which boast an extra-large potato shred, are served both as a stand-alone side dish and in the massive, amazing "Hungarian pancake," which is basically a huge latke pie filled with goulash.
853 Manhattan Avenue, Brooklyn, side dish $4.75, Hungarian pancake $7.25

Stage Restaurant: Grab a stool at this old-school East Village diner, which fries up oversized latkes to-order. They're thick and dense, with a very finely grated potato that teeters on the brink of mashed, served in golden-crisp, irregularly shaped patties.
128 2nd Avenue, $7.45 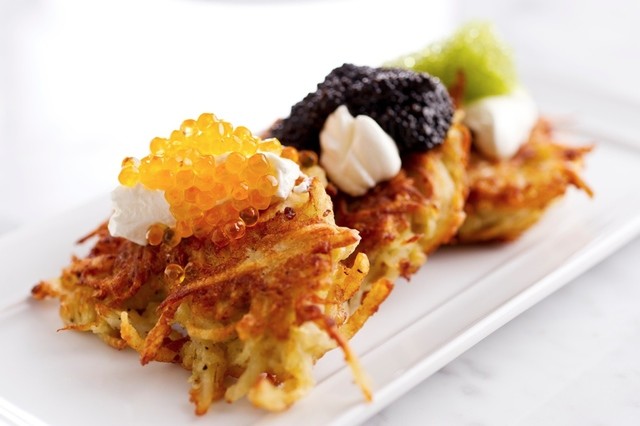 Kutsher's Tribeca: This brand-new Tribeca outpost of the beloved Catskills resort is being heralded as the new face of upscale Jewish cuisine. Their pancakes are small but packed with salty flavor and come topped with local apple compote, sour cream, or caviar. Starting on December 20, they'll be hosting an "Eight Nights of Latkes" fest with "a new and inspired latke for each night of Hanukah."
186 Franklin Street, $9-18

Toloache: Yes, it's a Mexican restaurant, but chef Julian Medina converted to Judaism and now whips up a special Hanukkah menu every year to celebrate. Try his fusion-y creations like potato-jalapeno latkes with horseradish crema and zucchini with tomatillo-apple salsa starting on December 20th.
251 West 50th Street, $13