Where To Find The Best Greek Food In NYC

Food in Greece is all about simplicity. Quality ingredients, just the right amount of olive oil, and a squeeze of lemon. That's it. Greek food is not about reinventing the wheel.

It's the opposite of some of the gimmicky hysteria we often see in the New York food scene. You won't find any Cronuts, rainbow bagels, or hot dog ice cream in Greece. The cuisine lets fresh flavors stand out for themselves without the worry of a perfect Instagram composition. Below, where to find the best Greek food in NYC. 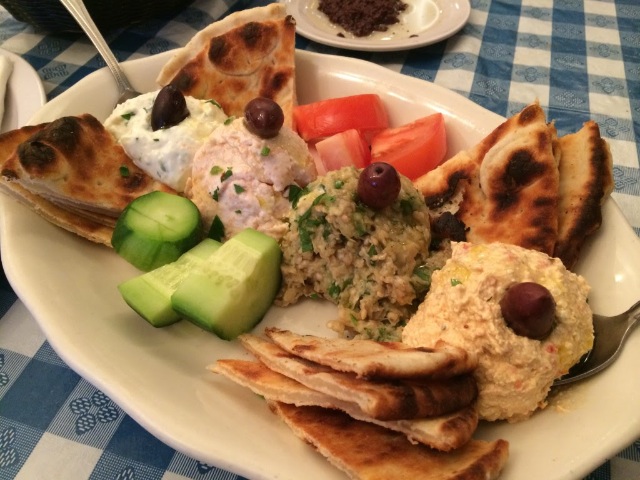 GREGORY'S 26 CORNER TAVERNA Of all the Greek restaurants I've visited in New York, none resemble the tavernas in Greece as much as Gregory's. Beautiful photos of Mykonos, men smoking cigarettes and twirling worry beads outside, and giant plates of mezedes could fool you into thinking you were actually in the Mediterranean. But this is Astoria, where the Greek community is legendary, and Gregory's is where the locals eat. The Greek hospitality helps, but the main draw is the impeccably fresh food including addictive fried smelts, fennel and orange scented sausages, and authentic sagnaki—a pan-fried cheese dish—which arrives without the usual showy gimmicky flames. 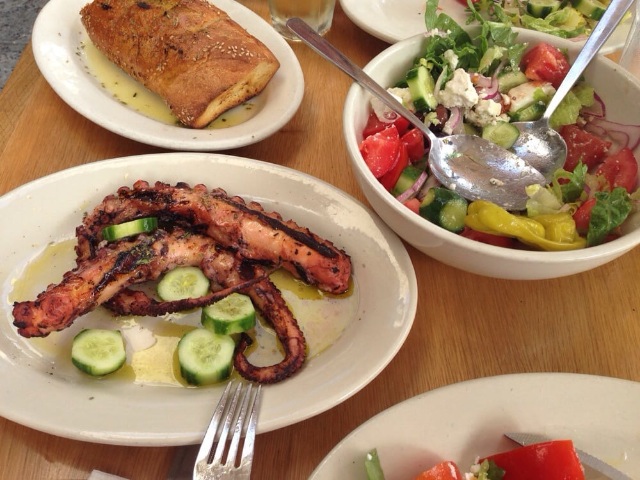 TAVERNA KYCLADES More famous (and queue-inducing) than Gregory's is the seafood-focused Kyclades. This is the place most people in NYC think about when they think of Greek food. Tables and people waiting for one spill out onto Ditmars Boulevard along with whiffs of grilled whole branzino. The olive oil and lemon drenched octopus manages to be more tender than a medium rare filet mignon. Seafood isn't the only thing they do well here—they make perhaps the best horitaki (Greek salad) this side of the Atlantic. Their newer yet no less popular East Village location is also worth the wait. 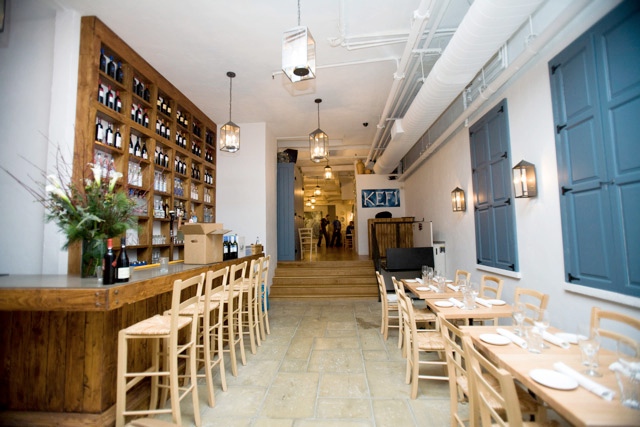 KEFI Upper West Side stalwart Kefi is still going strong after moving a few blocks north from its original location. Before opening more swanky restaurants, Chef Michael Psilakis was cooking simple meals at this neighborhood gem. The large subterranean dining room and cozy front room offers big flavors in the form of simple dishes, like lemon potatoes, sheeps' milk dumplings with spicy lamb sausage, and an array of Greek dips and salads. Another win for Kefi is that it's open for brunch and the prices are still a steal. 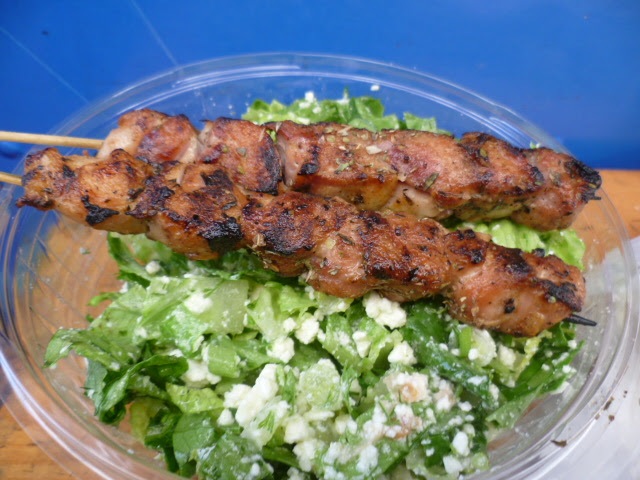 SOUVLAKI GR Restaurant professionals will tell you that blue is not the best color for a restaurant design. Unless, of course, you are creating the feeling of dining amidst the curvy aquatic architecture of a Cycladic island. After winning multiple Vendy Awards on the emblematic food truck, Souvlaki GR has made a name for themselves with their expertly chargrilled meat cubes and homemade pita bread. The truck still roams the streets, but the two restaurant locations offer the true transportive experience. Don't miss the bifteki and the Greek fries topped with feta and oregano.

Souvlaki GR has two locations and one food truck: 116 Stanton Street at Essex Street in the Lower East Side (212-777-0116, souvlakigr.com) and 162 West 56th Street between Sixth and Seventh Avenue in Midtown West (212-974-7482, souvlakigr.com). Check out Twitter to find out when the truck is in your area next. 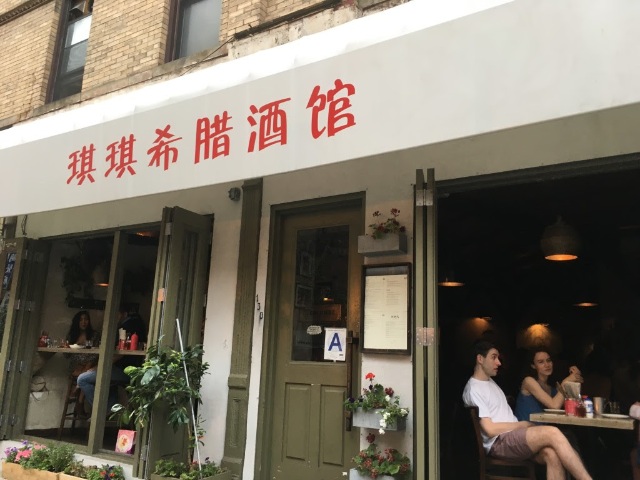 KIKI'S Nothing about Kiki's ambiance screams "Greek food." Not the mysterious Chinese marquee, not the dark cramped interior, and not the grungy attired hipsters at the table next to you. But everything about the food is Greek. From the owners of nearby Forgetmenot (and co-founders of the original Souvlaki GR), Kiki's has been quietly packing the crowds since they opened last year. You might come here to be seen at one of downtown's most exciting hot spots, but what you'll get is Greek comfort food just like yiayia used to make.

Layered pastitsio is terrific and hearty, as is the browned and juicy Paidakia (lamb chops) which pairs beautifully with their homemade garlicky tzatziki. If you're feeling less peckish, baked gigantes beans or addictive zucchini chips will do the trick. 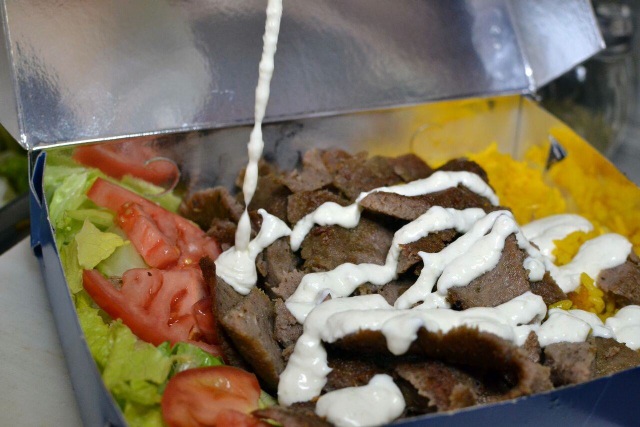 UNCLE GUSSY'S Today, halal food reigns supreme in the world of New York street food, but just a few decades ago it was all gyros, souvlaki, and tztatziki. One of the holdovers from those Greek days is Uncle Gussy's, now operated by the original founder's nephews. The boys' mom still provides much of the home cooked food, including specials like keftedes, stuffed tomatoes, and their iconic tzatziki sauce. It's no wonder that weekday lunch hours bring huge lines where business folk wait for their fix of french fries and mouthwatering souvlaki. Thankfully, some things on the streets have not changed. 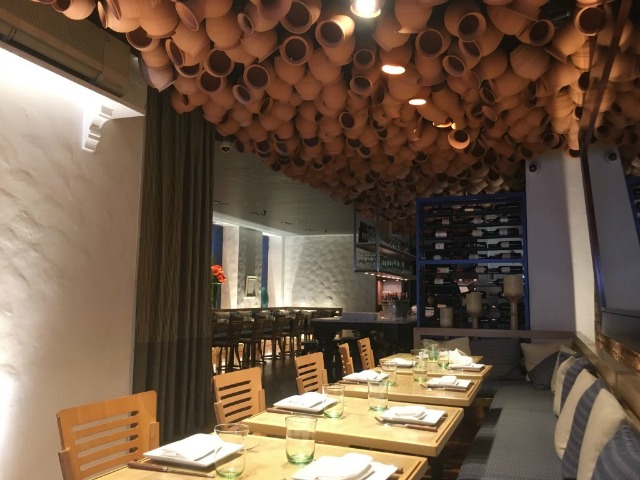 PYLOS One of the more fashionable Greek restaurants in the city sits snug in the East Village. The ambiance is lively and intimate, but gives way to innovative twists on homestyle classic. For instance, the appetizer moussaka is completely vegetarian, subbing artichoke for ground meat, while the traditional rustic egg-lemon avgolemono soup has a touch of champagne. Whatever you do make sure to take a clue from the restaurant's name and decor (pylos refers to clay pots, which also populate the ceiling) and order something cooked in said pots. Might I suggest the rich, tangy three cheese sagnaki or the luscious, tender honey braised lamb shank? And all the food pairs perfectly with their impressive selection of Greek wines. 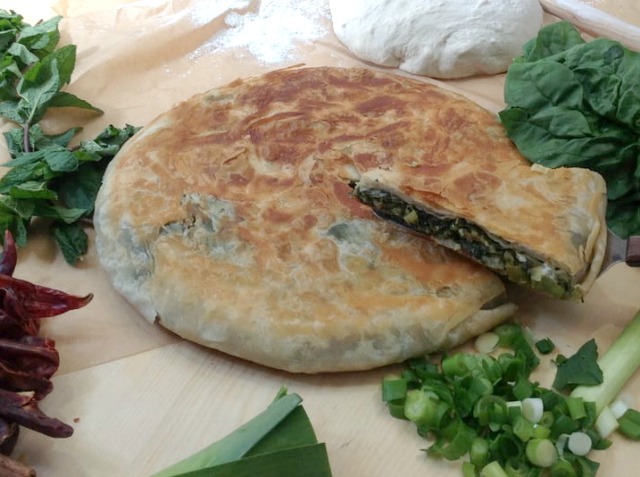 PI BAKERIE Greeks pride themselves on their simple breakfast of a frappe and cigarettes. For anyone who needs something slightly more substantial, Pi Bakerie serves Greek pastries and yogurt all day long. While you may see more trendsetters than old Greek grandmothers in this off-the-beaten path Soho cafe, the food prepared by Chef Regina Katopodis is about as legit as it gets. You can sit all day like the Greeks do and enjoy your buttery spanakopita and triopita or live like a New Yorker and take the meals to eat on-the-go. This is also the best place to try koulouri, the Greek's version of a sesame-crusted bagel.

Pi Bakerie is located at 512 Broome Street between Thompson Street and West Broadway in Soho (212-226-2701, pibakerie.com) 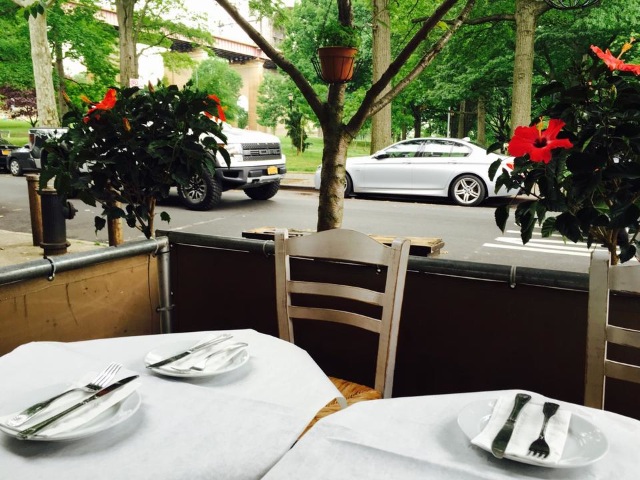 AGNANTI MEZE It might not be Mount Olympus, but Agnanti offers picturesque views of Astoria Park. This taverna is a bit hidden away from the bustle near the N train, but the trek is quite rewarding. The food is some of the best you'll find in Astoria and the diversity of the menu hints at why the Mediterranean diet rewards such long lives. In addition to the usual dips, there are small plates including heart-healthy mashed fava beans, garlicky dandelion greens, and stuffed calamari. Seafood is expertly done, including a smoky charred octopus and grilled sardines.

But the piece de resistance is their house specialty of rooster cooked in tomato sauce over pasta. Agnanti may get less attention than some of the other restaurants on this list and I imagine the rabid regulars would like to keep it that way. 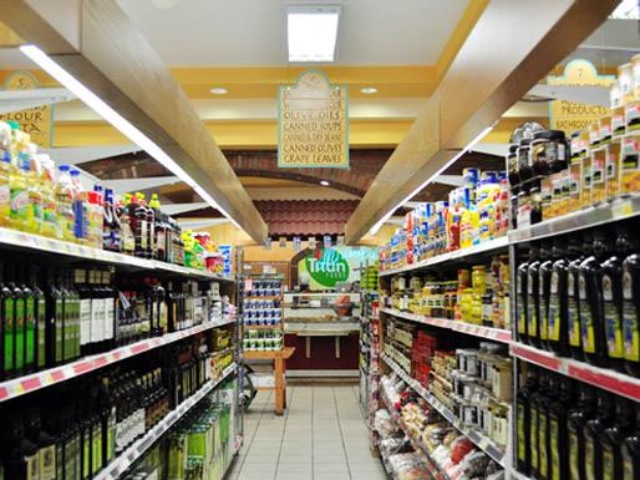 TITAN FOODS For those that want to indulge in moussaka and saganaki in the privacy of their own home, Titan has got you covered. The largest grocery store in the U.S. dedicated to Greek ingredients and prepared food, this is the place to learn your feta from your kefalotiri. The olive oil selection far outnumbers the butters and you could easily get lost in the aisles of Greek honey, grape leaves, yogurt, spoon sweets, and more. There's a traditional coffee counter, a selection of Greek beer (including a craft option from Santorini) and a bakery with a wonderland of savory and sweet treats. Don't leave without grabbing a custard-filled galaktoboureko.

#greece
#greek
#greek food
#original
Do you know the scoop? Comment below or Send us a Tip