Where To Find The Best Brazilian Cuisine In NYC

The Rio Olympics are nearly upon us! And while you're (probably luckily) not traveling to Rio this August, there's no reason you can't quench your Olympic athlete-sized appetite on Brazilian bites throughout the city. On 46th Street, you'll find Little Brazil's cluster of Brazilian restaurants, hawking pre-theater menus at jacked up Times Square prices. But beyond Midtown, plenty of Brazilian eateries are ready to introduce you to Brazilian food 101.

We did the training and jumped the hurdles for you to find the essential Brazilian dishes and where to get them in NYC. Here are a few that earn a gold medal: 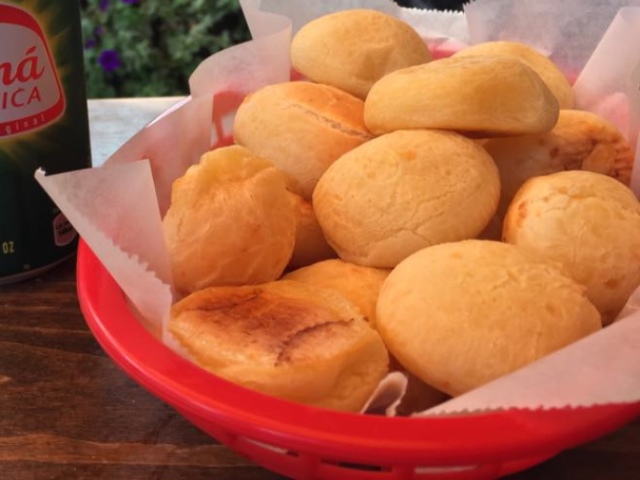 Pao de queijo at New York Pao de Queijo Two words: Cheesy. Bread. Grilled cheese lovers and pizza addicts alike who are late to the pao de quejo game can sample a $3 bite-sized cheese bread at this Astoria spot, but be forewarned that you're going to want a full order. And then another basket of these warm, gooey cheesey munchkins that are dangerously addictive. You'd also be wrong to leave without trying one of the restaurant's beloved Brazilian-inspired burgers, like the X Calabresa topped with Brazilian smoked sausage, cheese, corn, potato sticks, lettuce, tomato and mayo. 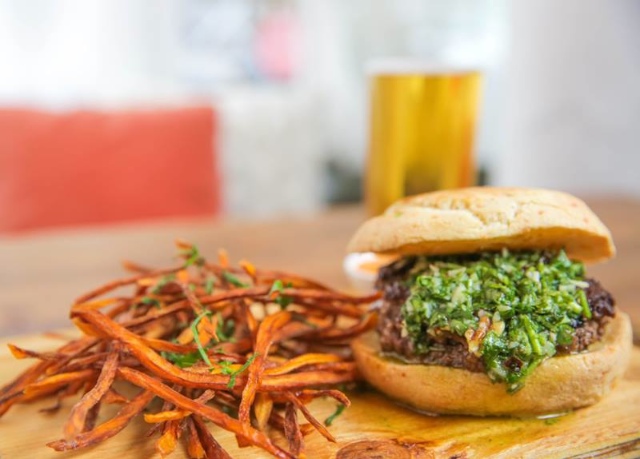 Picanha at Colonia Verde One of the most beloved Brazilian cuts of beef, the rump cover or the picanha is pretty much the filet mignon of Brazil—only with way more delicious fat. Served with homemade salsas and farofa, a popular couscous-like Brazilian side made from toasted cassava flour, this juicy 12 oz. steak served in a modern rustic dining room is the quintessential Brooklyn-Brazilian hybrid. Those who prefer their beef ground and their food even more New York-ified can opt for the pao de quiejo burger, served in a toasty pao de quiejo bun and topped with a zesty onion and cilantro pesto like the one you'd be dipping your steak into.

Pastel de Camarão at The Coffee Shop Pastels, i.e. the Hot Pockets of Brazilian cuisine, but not made in the microwave, can be filled with everything from chicken to cheese to ground meat to chocolate, vegetables, seafood, jam and beyond. Grab a warm, flaky pastel at "23-hour" restaurant and professional model hangout The Coffee Shop. Here, the pastry is stuffed with camarão (shrimp) and South American spices. Order a side of Sopa de Peixe Bahia, a Brazilian seafood chowder to dip it in and a side of plantain chips. 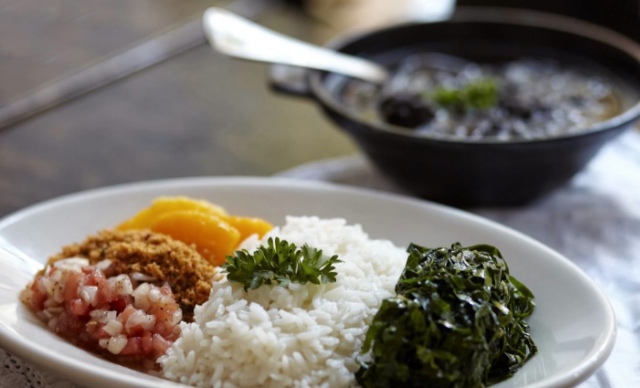 Feijoada at Casa The national dish of Brazil and often called the “soul food” of the country, this black bean and meat stew can be cooked from a plethora of meats and cuts, often from a cherished family recipe. Served with orange slices, white rice, collard greens and farofa, you can find a comforting dish of feijoada at the charming West Village Casa, where an extensive menu of homey Brazilian classics are also served just steps from the famous Friends apartment exterior. 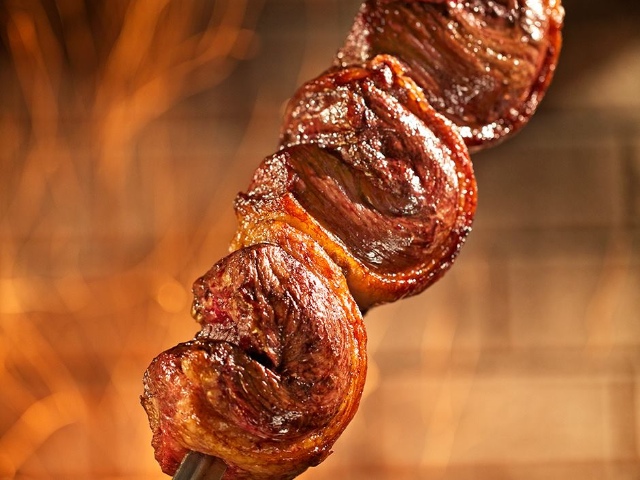 Churrasco at Fogo De Chao For many, the first thought when it comes to Brazilian food is endless meat served on swords. Churrasco, or grilled meat, is a legit Brazilian food and you can eat plenty of it at a handful of great to mediocre all-you-can-eat chain churrascarias in New York City. I first visited Fogo de Chao as a teenage vegetarian and was truly wowed by their meat-free salad bar, which is obviously the first sign of a high-quality steak restaurant. As a carnivore, the ever-rotating selection of meats carved tableside are also pretty good. It's dramatic. It feels fancy. And best of all, it's all you can eat. If you're going to make it an all-meat month while fueling up to watch the Olympics, stop by Churrascaria Plataforma in Hell's Kitchen and Astoria's Copacabana for endless Brazilian food as well. 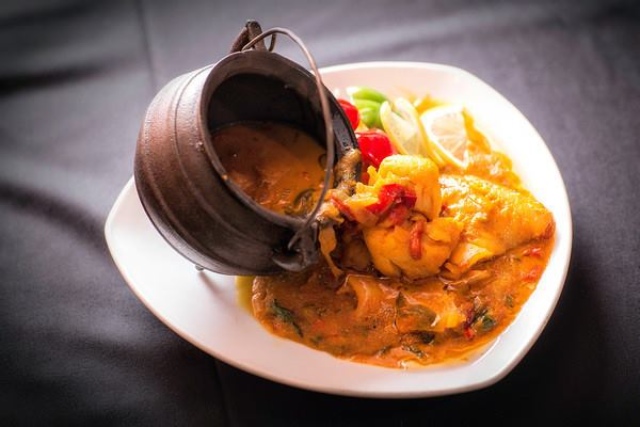 Moqueca de Peixe at Favela Grill This seafood stew is a common Brazilian dish adopted from traditional Portuguese cuisine. At Favela, the fragrant fish stew is simmered with dende oil (a palm oil used in Brazilian cooking), green herbs, onions, tomatoes and coconut milk and is served with pirão, a starchy side made with cassava flour, greasy pan drippings (bacon fat!) and pureed to the consistency of (very tasty) baby food. 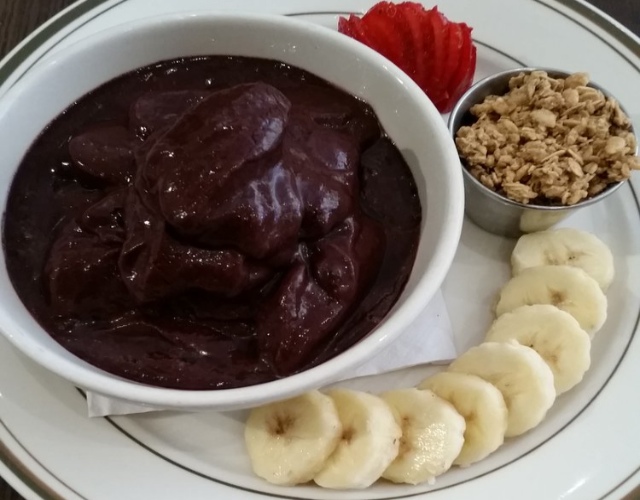 Costelinha de Porco and Acail Bowl at Berimbau Add some Brazilian flair to your summer BBQ cravings with traditional pork ribs, coated in homemade barbecue sauce at this Bleecker Street corner joint. Order with a side of yucca fries for an extra dose of carbs. Those who are on a more beach-minded i.e. healthy diet should visit for brunch, where you can find a deep purple acai bowl—the trendy superfood is grown in Brazil—served with fruit, granola and that side of pao de quiejo you couldn't help but order, because there's never an inappropriate hour for freshly baked cheese bread. 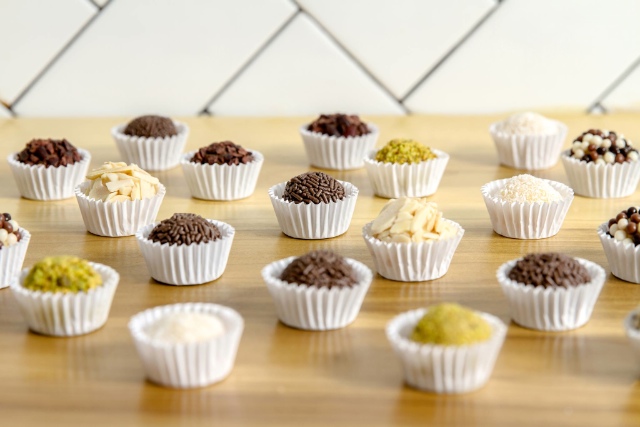 These Brazilian truffle-like treats are made with condensed milk, cocoa powder and butter and then coated in sprinkles like every decent dessert should be. Brigadeiro Bakery, boasting the motto “You'll love it before you can even pronounce it” (accurate), serves a range of brigadeiros in flavors like coconut, passionfruit, coffee and even an all-American Oreo-encrusted version. 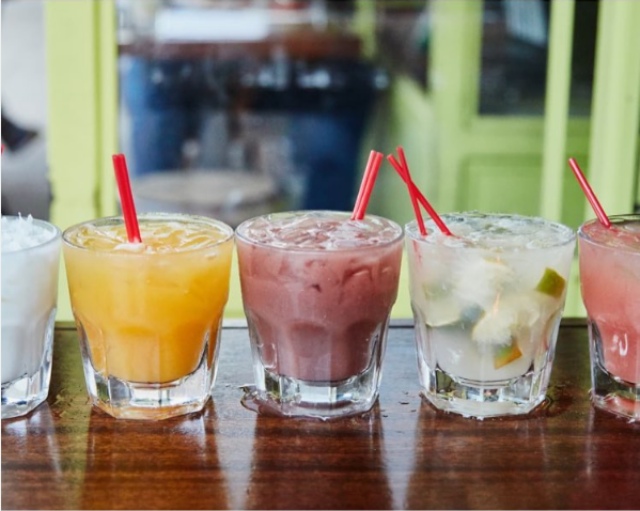 Caipirinha at Beco The national cocktail of Brazil is made with Brazil's most popular spirit: Cachaça, which is distilled from sugarcane. Find the refreshing muddled lime cocktail at Williamsburg's Sao Paolo-inspired bar, Beco, where you can order by the pitcher or taste a flight of five different sipping cachaças for a quick lesson in Brazilian spirits. Other tropical cocktails include whiskey and coconut water and a boozy coconut milkshake with cachaça.

Melissa Kravitz moved to New York City in 2009 and has been writing about food ever since. Her work can be seen on Thrillist, Mashable, Elite Daily, First We Feast and more. She eats mostly noodles and is working on a novel.

#brazil
#brazilian
#olympics
#rio
#original
Do you know the scoop? Comment below or Send us a Tip