Where To Eat America's Best Regional BBQ Styles In NYC During the past fifteen years, New York City has become increasingly regarded as a place to find first-rate barbecue. Not only are there many excellent places to find barbecue in the city, you can also now see different regional styles of barbecue represented throughout the five boroughs.

Each regional style has something that makes it special, whether it's a certain cut of meat that is emphasized or a particular kind of sauce that is found at every table. Here are the different regional BBQ styles you can find in NYC and which restaurants do them best. 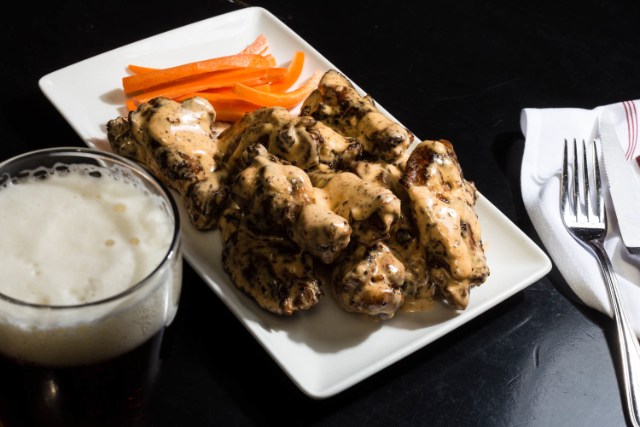 Alabama is not one of the "big four" when it comes to BBQ regions (those would be Carolina, Kansas City, Memphis, and Texas), but it does have a considerable BBQ scene. Pork and chicken are the most commonly barbecued meats in Alabama. But one major thing really sets Alabama apart in culinary world—its white BBQ sauce, which is mayonnaise- and vinegar-based.

Sadly, Alabama 'cue doesn't have a real home in New York. Thankfully, Jean-Paul Bourgeois, the executive chef at Blue Smoke, has a special place in his heart for Southern cuisine, the kind of food he grew up on in Louisiana. Over time, he came to admire the work of pitmaster Chris Lilly and Alabama's arguably most famous BBQ restaurant, Big Bob Gibson Bar-B-Q, which put white sauce on the map.

Bourgeois recently created a new Blue Smoke item called the Smoked Alabama White Wings, a delicious take on chicken wings you won't find anywhere else. The perfectly smoked wings are covered with Bourgeois' addictive take on Alabama white sauce. His version has a mayonnaise base, distilled vinegar, mustard, salt, pepper, and a few "secret spices." The White Wings are listed on Blue Smoke's starter menu but one could be forgiven for ordering them as his or her main course. It's that good.

"Typically we wouldn't attach a region to any of our barbecue because we have a very specific vision of what Blue Smoke barbecue is, but we wanted to pay respect to Alabama, Chris Lilly, and Bob Gibson," Bourgeois told me recently at Blue Smoke's Flatiron location. "Although we call them Alabama White Wings and that's definitely the inspiration, we think we have something to add to that dialogue." 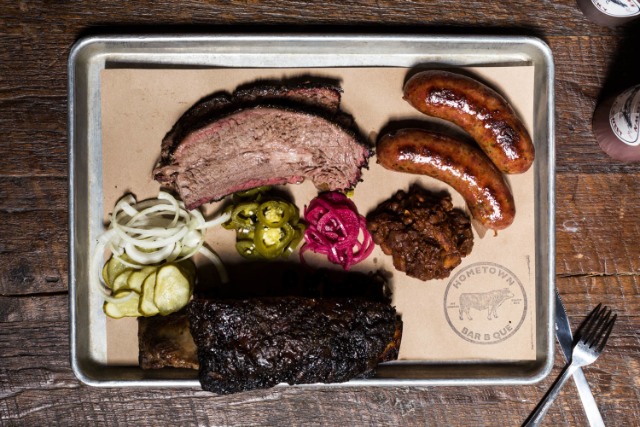 Texas is by far the state with the most BBQ joints in the country and to many there, it's a serious and important tradition. While there are other styles present, Central Texas is the best-known BBQ style in the state and many of the same tactics developed there are used in some of NYC's better-known BBQ joints today.

Central Texas style was allegedly first started in towns like Lockhart or Taylor, but for today's masses, Austin is the go-to place. Austin-based Franklin Barbecue is often called one of the best BBQ joints in the world and people famously wait outside for five hours there to get 'cue. At Central Texas restaurants like Franklin, you've got a wide selection of meats including pork ribs, sausage, and turkey, but brisket is king and it's how you'll likely be judged. BBQ sauce and side dishes are often an afterthought with most of the effort going into the meat and only the meat. 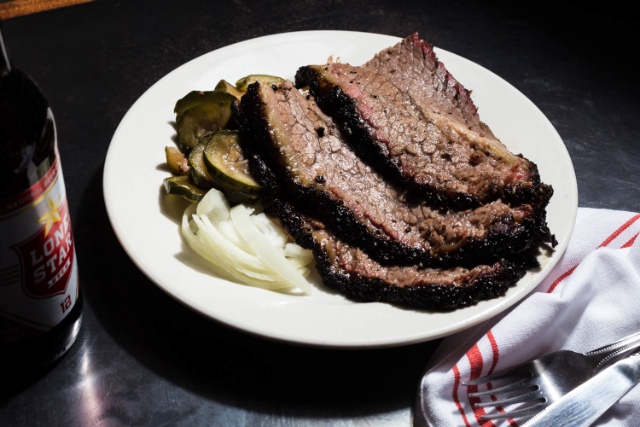 Hometown Bar-B-Que, one of the best BBQ joints in the city, is not purely trying to emulate Texas 'cue (just look at the Jamaican Jerk Baby Back Ribs), but much of its craft is borrowed from Central Texas. Hometown pitmaster Billy Durney was mentored by well-known Texas pitmaster Wayne Mueller, the owner of Louie Mueller BBQ, and he has a tattoo of Texas just above his right ankle with the letters "BBQ" in the center.

Two of the best items at Hometown that follow some of Central Texas' traditions are the incredible brisket and beef ribs. The brisket, which is smoked between 12 and 15 hours, is moist and intensely peppery, while the beef ribs are so tender they fall off the bone. Unlike many Central Texas joints, Hometown actually has plenty of good sides too, including Texas-style mac and cheese.

A few other outstanding options for Central-Texas-style 'cue in NYC can be found at BrisketTown and Morgan's Barbecue. Both restaurants try hard to adhere to some Central Texas traditions, with excellent brisket and pork ribs. 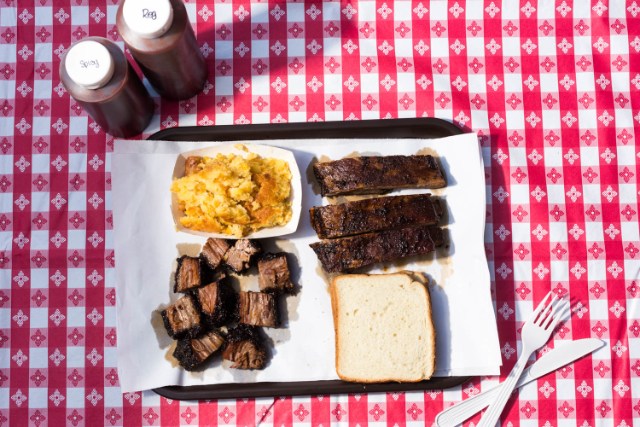 Kansas City's storied barbecue traditions stretch back to the early 1900s, and the greater KC area is home to more than 100 different BBQ joints. Kansas City pitmasters are apt to serve all types of meat, but there are two important things stand out.

First is the sweet, tomato- and molasses-based sauce that you slather all over your meats. Some of the sauces are sweet, some are spicy, and some walk the line in the middle. If you're eating what someone claims to be KC BBQ and they don't have sauce, get out of there.

Second, Kansas City loves burnt ends, which are cut off the point half of a fully smoked brisket and then typically cooked further. Burnt ends are a delicacy and deeply important to Kansas City pitmasters. 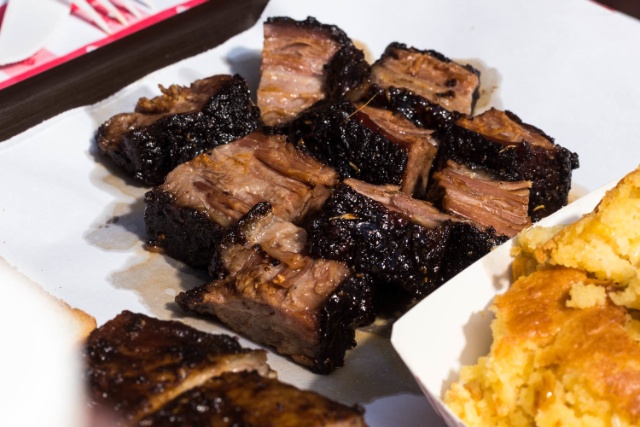 Only one restaurant in NYC has fully embraced Kansas City style 'cue: John Brown Smokehouse in Long Island City. The BBQ joint, which was opened in 2010 by KC-native Josh Bowen, is Kansas City to the core with Chiefs and Royals memorabilia on the wall and Boulevard beer on tap.

"I was born and bred in KC, lived in Austin, and then worked at Hill Country," Bowen said. "I kind of missed my KC BBQ and felt there wasn't much in NYC so I thought I would give it the ol' college try."

Bowen has succeeded with aplomb. John Brown has a wide selection of slow-smoked meats, including brisket, pulled pork, chicken, pork belly, and even pastrami. The pork belly and pulled pork are fantastic, but the real winner is the burnt ends, which are twice burnt to make them extra crispy on the outside and tender on the inside. And, just like any good BBQ restaurant in KC, it has also has excellent tomato-based sauces that range from sweet to burn-your-insides hot. 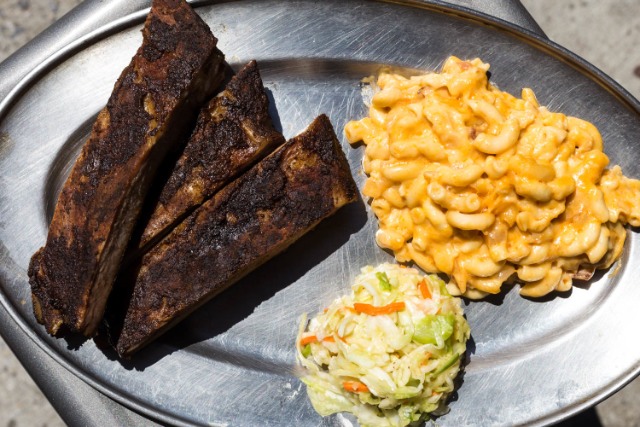 Memphis barbecue is best known for having well-smoked pork items, including ribs, shoulder, and pulled pork. The biggest twist here is that many Memphis pitmasters offer ribs "wet" or "dry." Wet means they throw BBQ sauce on the ribs before, during, and after the cooking process. Dry means they only put dry rub on the ribs and normally they are eaten without any sauce.

With so many great BBQ restaurants to be found now in New York, it seems somewhat crazy that no single restaurant offers a variety of great Memphis 'cue. Now, you might be wondering about Southern Hospitality, the supposed Memphis BBQ joint co-founded by Justin Timberlake. Sadly, it's an uninspired Midtown tourist attraction with mostly bland barbecue items, including sad dry-rub ribs.

After searching far and wide in NYC for decent Memphis representation, I found only one BBQ joint with admirable Memphis-style ribs on the menu. Joeper's Smokeshack, a tiny and little known BBQ gem located in Brooklyn's Marine Park, has delicious dry-rub ribs that are smoked for four and a half hours with care by owner Joe Pandolfo. As they should be, these ribs are served with a choice of three different BBQ sauces on the side. (But they're good enough to forget about sauce.)

The self-trained Pandolfo, a native of southern Brooklyn, opened Joeper's in August 2011 and he designed the menu to reflect BBQ from all over the United States. While Joeper's is decidedly not a Memphis barbecue joint and Pandolfo has never made it to Memphis, it's easy to imagine him bonding with other hard-working Memphis pitmasters that deeply respect the craft. 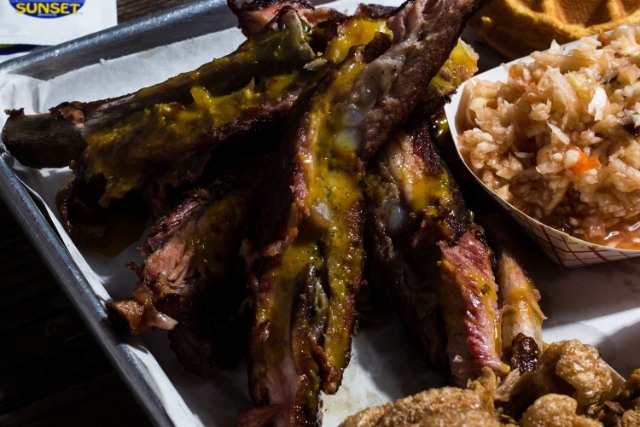 When it comes to barbecue, North Carolina has divided itself into two distinct camps: Lexington-style and Eastern-style BBQ. Lexington uses a red sauce made from vinegar and ketchup, while focusing on pork shoulder. In contrast, Eastern rides hard for smoked whole hog and uses a vinegar-and-pepper-based BBQ sauce without tomato.

South Carolina has some similarities to North Carolina when it comes to the meat, with parts of the state embracing whole hog and others embracing pork ribs. However, one particularly unique item can be found in central South Carolina: mustard-based BBQ sauce with vinegar and brown sugar mixed in, among other spices. 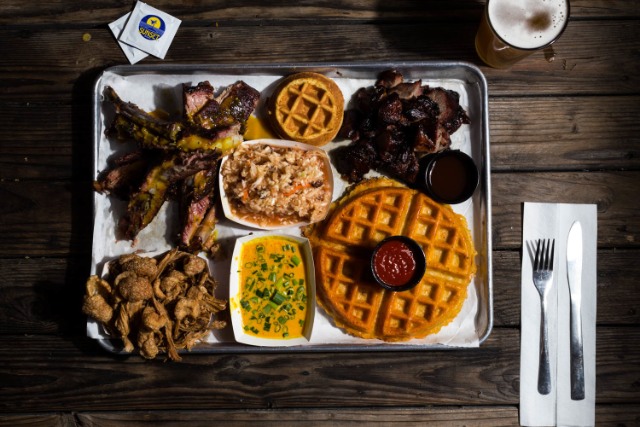 When you compare what Brother Jimmy's attempts to do with the relative newcomer Arrogant Swine, it pales in comparison. Arrogant Swine, the brainchild of Queens-born Tyson Ho, serves up real-deal Carolina 'cue that represents aspects of both North and South Carolina.

Arrogant Swine's best menu items are Carolina to the core, including delightful slow-smoked whole hog and pork shoulder, both served by the half pound. They also offer tasty pork ribs that are topped with a South Carolina mustard glaze and Lexington-style coleslaw that replaces mayo with red vinegar and other sauces.

"No other NYC barbecue joints do Carolina style," Ho said. "Most try and claim it by simply putting vinegar over pulled pork but the austerity of Carolina tradition demands an all-or-nothing approach. To cook pork in a machine, dousing it with vinegar and calling it Carolina is not only not even coming close, it's an insult to the style. Cook the entire animal, cook over burnt-down wood coals, and respect the tradition, or just call it something else."