Where The Aji Dulce Grows 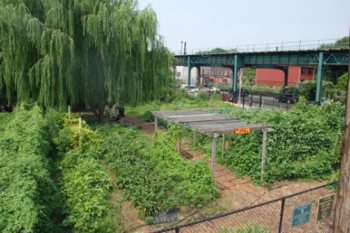 Coming up next Monday is a benefit event celebrating East New York Farms, an organization that seeks to remedy the dearth of good nutritional choices in the Brooklyn neighborhood by growing and distributing its own food, along the way inviting a wealth of community participation.

“Our first season was one gardener out on the sidewalk with a table,” says Sarita Daftary, Project Director of East New York Farms! (the exclamation mark goes with the territory and is intentional) “Now our market is large enough to justify closing off a whole street for 21 consecutive Saturdays, and we saw over 14,000 customers last year.”

Owning much to the confluence of different ethic culinary traditions among its neighborhood's residents, the East NY Farmers Market is moreover one of five boroughs’ most interesting, where bitter melon can be found alongside summer squash, and both Jamaican and Trinidadian varieties of callaloo leaves are sold. Daftary notes new crops like Mexican papalo have been to the farm's beds as community involvement has grown, and demand for hard to find vegetables and herbs has increased. East NY Farms’ “urban agriculture” gardens produced than 11,000 pounds of vegetables for the East New York Farmers Market last year, a fraction of their total output.

At Monday’s event, Peter Hoffman of Savoy will provide a cooking demonstration using locally grown produce; a veritable sustainability brigade of local restaurants, including Blue Hill, The Spotted Pig, and Cookshop will serve hors d oeuvres. Locally produced wine from Long Island’s North Fork is being provided by Peconic Bay Winery. The fundraiser will also honor The Hitachi Foundation and Heifer International, two philanthropic institutions that support the ongoing work at East New York Farms!. Tickets are $125, a portion of which is tax deductible, and the event is taking place at 632 on Hudson. More access to Community Supported Agriculture means a greater supply of fresh food to our city’s lower income areas and all of its associated benefits, so this is a rare invocation of ye olde “for less than a price of a cup of coffee” line: Next Monday night, something less than the price of a overrated restaurant meal (or a few rounds of entirely forgettable drinks) can actually do some good in the world. Call (718) 649-7979 or email for more information.