What's Going On With Grimaldi's?

The Brooklyn pizzeria famous for toppings like giant olives and metal shards seems to have shut its doors under mysterious circumstances: According to an anonymous tip Gothamist received Tuesday, Grimaldi's has been closed for "renovations" for weeks, and the advertised completion date has since been pushed from mid-February to early March.

The two recent Department of Building permits on record reflect minor renovations to the kitchen, and yet, our tipster reports seeing dumpsters and trucks hauling away large amounts of debris. Meanwhile, the pizzeria's website appears to be down, and calls to the restaurant did not go through. 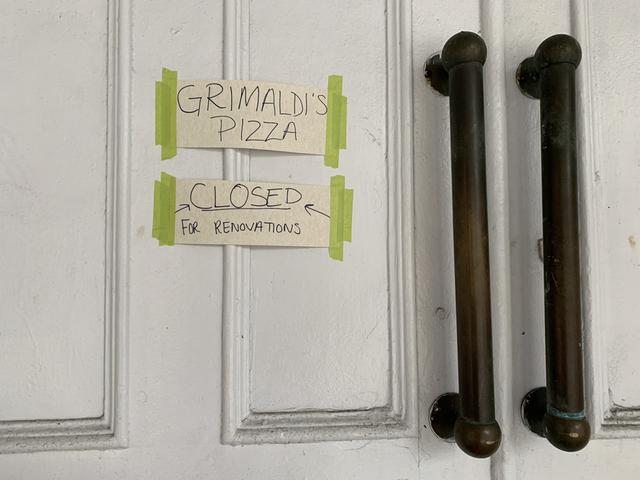 Grimaldi's has a complex and confusing ownership history, one I will attempt to briefly outline for you now: Patsy Grimaldi opened the original Grimaldi's—initially called Patsy's—on Dumbo's Old Fulton Street in 1990, selling it to Frank Ciolli in 1998. Ciolli still runs NYC's Grimaldi's, while his son, Joseph, has helmed the franchising effort through a company called JMC Restaurant Holdings.

Ousted by the landlord in 2011, Grimaldi's moved from its original location (now reoccupied by Patsy, who opened a pizza joint called Juliana's there in 2012) to a space next door. Marcelo Pevida and Tom Tao sublet that space to Ciolli, but have long wanted the pizza purveyors out. Tensions reached a boiling point in 2014, when Joseph Ciolli's JMC Restaurant Holdings sued Pevida, Tao, and an ex-Grimaldi's employee for $25 million, alleging the trio had opened a knock-off Grimaldi's in Shanghai. It's a tangled web, yes, but this a court exchange from last month suggests that Grimaldi's Front Street location may be closed for reasons other than renovations.

Our tipster furnished audio from a January 16th appeals hearing pertaining to a settlement struck from that same court case, which you can listen to here. As far as I have gleaned, Pevida et al. and Joseph Ciollo continue to argue over the respective parties' adherence to an agreement that would've allowed Ciollo to strike a new lease with 1 Front Street's landlord. It's all legalese to me, but at about the 4:40 mark, Pevida's attorney mentions that he "recently heard that the pizza parlor in Brooklyn is perhaps no longer in operation."

Then, at 26:40, counsel for Joseph Ciollo says, "I understand there was an issue yesterday where there's a bankruptcy going on, there was a trustee appointed, that there was an inventory going on. I don't know whether the restaurant has reopened today, but that is just a momentary issue: My client has the lease, my client intends ... to continue to operate that restaurant."

Figuring that the neighboring pizzeria might have an idea about what's going on at Grimaldi's, I asked a Juliana's employee whether or not the embattled establishment had been operational in the past month, and if they knew what the larger deal was. That employee quickly noted that Juliana's doesn't pay too much attention to Grimaldi's operations, and expressed discomfort with the question. Another anonymous restaurant source added that they'd "heard that the son took over, and he’s making some improvements to the space."

Separately, Gothamist received a tip in December including two pictures of the Grimaldi's outpost in Chelsea: On the door, a sign notified visitors that the property had been "seized due to nonpayment of taxes." The same thing happened in 2016, but the location rebounded. According to Yelp, however, the 6th Avenue location is currently closed.

All of which is to say, questions abound! If you have any information, please let us know: the tip line (tips@gothamist.com) is always open.

#brooklyn
#dumbo
#grimaldi's
#juliana's
#mystery
#pizza
#original
Do you know the scoop? Comment below or Send us a Tip