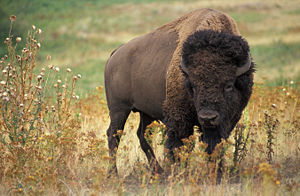 Marian Burros has an article in the Times this week about the resurgence of buffalo as an alternative red meat. She calls it “steak without guilt,” as the meat is healthier than beef: loaded with iron, with less total fat, fewer calories and more of the good kinds of fatty acids. It’s also praised by chefs, environmentalists, and nutritionists, a rare concurrence.

As with beef, it’s important be aware of what the animals are fed. Some buffalo eat nothing but grass; others spend their final months on grains, which is the way much cattle in this country is finished. It also makes the meat slightly higher in fat and calories.

Bison is available from local producers at the Union Square Greenmarket. Do you eat bison? If yes, in what form? And where do you buy it?

#animals
#As
#dining
#food
#Marian Burros
#this week
#union square
#union square greenmarket
Do you know the scoop? Comment below or Send us a Tip