What To Eat In And Around Forest Hills Stadium This Summer

Forest Hills Stadium is back for another solid season of concerts, bookended by Belle & Sebastian (who kicked things off last week) and a festival headlined and curated by The National in October. In between, you'll get performances from David Byrne, Robert Plant, Sheryl Crow, Van Morrison and many more. And if you plan on visiting the middle of Queens this summer for any one of these shows, you’ll need to eat. Fortunately, there are a lot of great options to do just that, both inside and nearby the historic stadium. 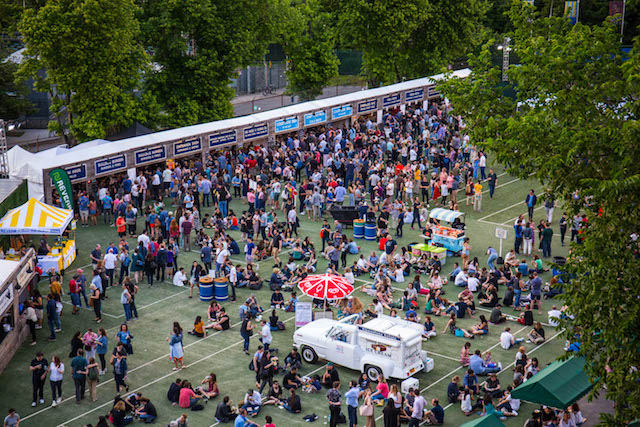 Inside the stadium compound you'll find an appealing roster of vendors that have set up shop on the big lawn near the front gates. On opening night Smorgasburg sophomore D’Abruzzo was busy grilling up their Arrosticini, those wonderfully rich and fatty lamb skewers which are terrific on their own or stuffed into a sandwich with cheese, a bit of fig jam, some arugula and onions, and a drizzle of spicy oil. The Fulton Landing Seafood Company were slinging their generously-stuffed Lobster and Rock Shrimp Rolls, Ponti Rossi was on wood-fired pizza duty (their Diavola, with funky hot soppressata, was very good), and Knot of This World were grilling their enormous soft pretzels.

The longest line of the night, though, was probably at the Warung Roadside booth, with people willing to wait for Thai-flavored dishes like the Holy Basil Stir Fry, a mix of sauced-up ground pork and egg over rice. Big Mozz and Cookie DO will be in Queens all summer (both the fried mozzarella sticks and fried balls of cookie dough are first-rate), and legendary ice cream purveyor Ice & Vice share a booth with Renegade Lemonade, so you can get delicious frozen treats, refreshing beverages, or a mixture of both (the two have joined forces to create signature lemonade/shaved ice concoctions).

You'll also find The Malaysian Project, serving up their version of a Ramly style burger (this was described to us as "a compact patty of beef or chicken, suffused with a profoundly warm curry blend, is folded inside a yellow-white tie-dye of egg cracked right on the grill, then slid into a bun slaked with brown butter and chile mayo"). 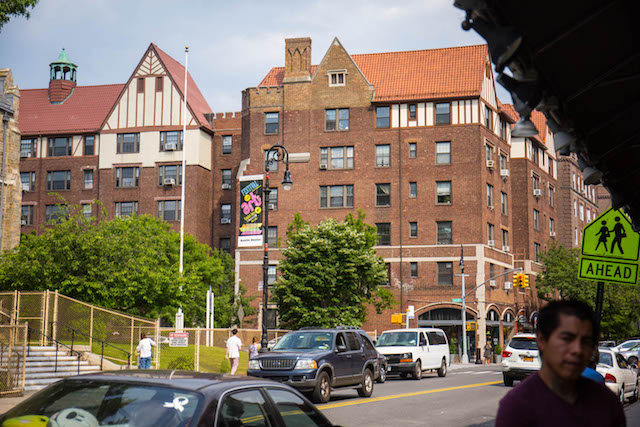 Outside the stadium. (Scott Lynch / Gothamist)

If you want to pregame your concert experience outside the stadium, Tudor-lined Austin Street (one of the reasons to love NYC, according to the NY Times in 1976) has a number of good restaurants within a few blocks of the venue.

Click through for a look at your options in and around Forest Hills Stadium this year.