What To Eat At Yankee Stadium & Citi Field This Season

Now that you know who's playing it's time to think about attending an actual baseball game. We're blessed with two fine stadiums here in New York City—one's even better than just "fine," which we'll explain below—and inside them are many, many things to eat. While the standby peanuts, Cracker Jacks, hot dogs and giant, wallet-emptying glasses of beer are always good go-tos, each of our stadiums boast some unique options for dining. Below, our favorite spots to nosh at the ballpark. 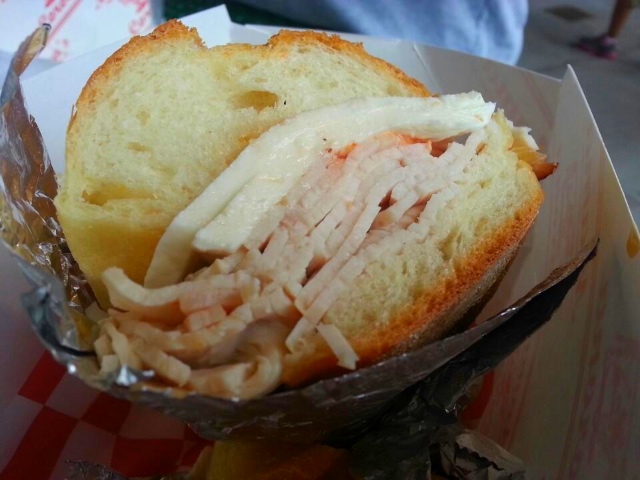 Mama's of Corona (via Foursquare)

Of the two baseball palaces, Citi Field is leaps and bounds better than Yankee Stadium, especially when it comes to dining. Not only does the stadium boast a lovely, walk-around, open-air dining area at the very tip top, it's also home to the most interesting eats that aren't just a plate of nachos.

Anyone who's visited Citi Field knows there's Shake Shack there...that boasts lines as long as all the others. Skip that in favor of something you can't get anytime you want, like the new grilled cheese emporium Pressed (125) by chef Josh Capon, the guy behind Lure Fishbar, Bowery Meat Company and other NYC restaurants. The brand new spot will be grilling up a Pepper-Crusted Bacon Grilled Cheese and a Slow Braised Black Angus Short Rib Grilled Cheese, along with a classic New Orleans Muffaletta and a Marinated Spring Vegetable Panini.

If you simply must ingest a Danny Meyer-sanctioned food product, check out Blue Smoke (140) for some game day barbecue. They're offering North Carolina Pulled Pork Sandwiches, Beef Brisket Sandwiches and either grilled or fried Chicken Sandwiches as well. On the side, fries, pit beans, cornbread or sesame coleslaw—and a Beam & Cola, please and thank you.

Big heroes with fresh mozzarella are the name of the game from Mama's of Corona (105, 415), where they'll fill you up just like an Italian mama. Gorge on Mama's Italian Special Hero, a Roasted Turkey with Mozzarella or Grilled Vegetables with Mozzarella—with a side salad for more virtuous moments. They also offer Italian sweets like cannoli and cookies.

For some reason, Two Boots (141, 317, 335, 412) always get overlooked on game day, a boon to pizza seekers since there's never a line for their delicious, weirdo pies. They do classics like pepperoni and cheese, plus a carnivore's delight Meat The Mets slice and even a V For Vegan with nary an animal product to touch its crust. They also serve wine, beer and (sigh) Skinny Girl Margaritas, so it's another great hack for dodging the winding booze lines.

If lobster rolls are more your thing, head to Catch of the Day (102) or go to Pig Guy NYC (105) for chocolate bacon on a stick. Finally, if you're one of the lucky ballers with access to the Caesar's Club, you can nosh on a Chicken Cacciatore Hero, a pasta bar and other Italian eats from super exclusive Rao's. 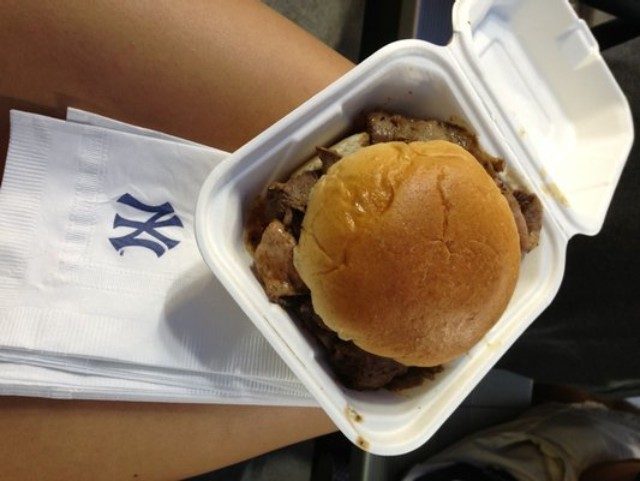 By and large, the choices at Yankee Stadium totally suck compared to those at Citi Field—except, of course, for the legendary Nacho Helmet. But if a $20 bowl of plastic cheese isn't what you get down with, here are your best bets.

Parm (104) is one of the stadium's few "gourmet" options, offering an abbreviated menu of the Torrisi team's red sauce sandwiches. They're doing Chicken Parm Sandwiches, of course, plus other hefty heroes to sop up all those $10 beers.

Fans dig the messy but delicious steak sandwiches from Lobel's Carving Stations (134, 322), which come soaked in a flavorful au jus broth—seriously, grab extra napkins for these bad boys. The company also runs a demonstration butcher shop at Section 133, where you can see them slicing up hunks of flesh for delivery to other food stands at the stadium.

Bro'd out barbecue chain Brother Jimmy's (133, 201, 214, 320A) has operated a Yanks outpost for a while now where you can snag pulled pork and chicken plus sides like mac and cheese, beans and the like. I actually worked at one of their restaurants for almost five years; the 'cue ain't as bad as people like to joke about.

And finally, you can find the Garlic Fries in almost every section. They're simple, to the point and downright delicious, especially if you're throwing back Bud Lights on a warm spring evening. Just make sure you've got mouthwash on hand.

#citi field
#yankee stadium
#original
Do you know the scoop? Comment below or Send us a Tip