What To Eat At The Annual Feast Of San Gennaro Ninety two years ago, when Mulberry Street hosted NYC's first Feast of San Gennaro, there certainly wasn’t anyone hawking fried mozzarella balls coated in falafel, or boozy gummy bears, or disturbingly realistic Shar-Pei puppy ice creams. Here in 2018, however, we do things a little differently, and the huge crowds that packed into Little Italy for the feast's first weekend were treated to an astonishing array of things to eat and drink, from the reassuringly old fashioned to the confoundingly newfangled.

There was everything you'd expect at San Gennaro, including tons of zeppole, stuffed clams, braciole, and cannoli; barkers suckering folks into playing games of "skill" to win an oversized rasta banana or whatever; carnival rides, touristy tchotchkes, fresh-rolled cigars, and plenty of alcohol everywhere you turned. But a lot of the newer, more Nolita-ish establishments were also out in force, as well a number of gimmicky ice cream treats of the sort you see all over Chinatown these days. Here's a look at just a few of the stranger things I tried on Mulberry Street, in approximate order of how much I liked them. 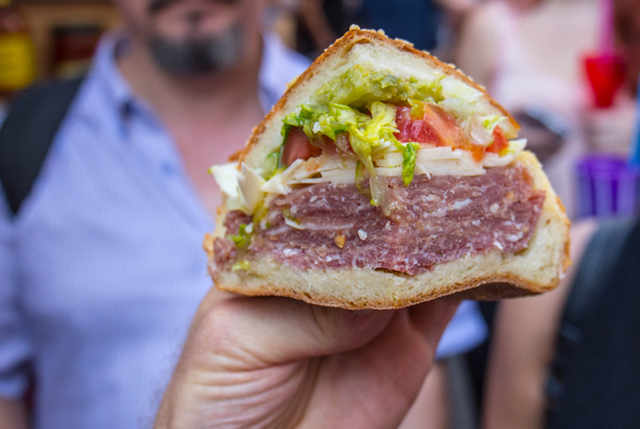 So get all of those things, or just stick with deep fried Oreos, scungilli, torrone, sausage and peppers, and comically long and skinny plastic tubes filled with juice and, maybe, if you ask nicely, a nip of something stronger. Go next weekend or any night this week if you enjoy jam-packed situations; weekday afternoons tend to give you slightly more breathing (and eating) room.

You'll find the Feast of San Gennaro on Mulberry Street in Little Italy, running 10 blocks from Canal to East Houston streets. The street fair runs through Sunday, September 23, and is open from 11:30 a.m. to 11 p.m. Sunday through Thursday, and until midnight Friday and Saturday.