What To Eat At Panorama Fest This Weekend The Panorama Music Festival kicked off its weekend-long party on Randall's Island yesterday, and, as is required at any such event in these modern times, there were lots of really good things to eat on the sprawling concert grounds. Friday saw a huge crowd, which meant long lines at almost every vendor in the General Admission areas, especially later in the afternoon and into the night. There was almost no waiting for anything in the VIP zones, however.

Here are some pick hits from among the 36 vendors (click through for more photos): 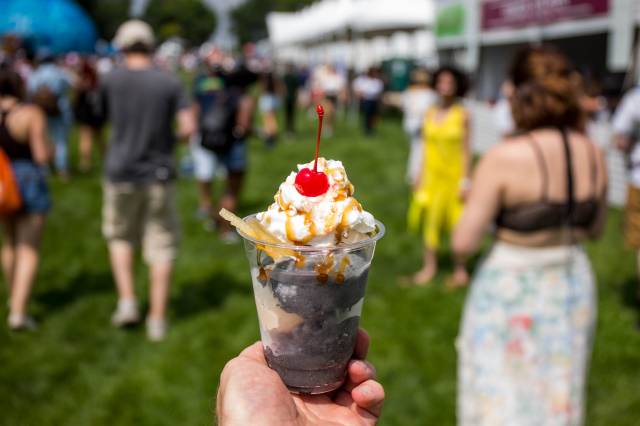 No surprise, the great Ice & Vice invented a couple of beautiful new concoctions for Panorama, involving both slushee and ice cream. I had the Arnold Palmer, which featured a large cup layered with charcoal lemonade ice, earl grey ice cream, a mound of whipped cream, a drizzle of caramel, and a pair of candied lemon peels. It was both satisfyingly sweet and completely refreshing.

Other excellent choices available to the General Admission masses include Big Mozz working their usual fried-cheese magic; Uma Temakeria, home of the healthy and invigorating sushi burrito; the always-reliable pizzas from Roberta's; Tea and Milk, who are selling sugar-bomb cookies from City Cakes; and Loco Coco, serving acai "smoothie bowls" loaded up with fresh fruit. 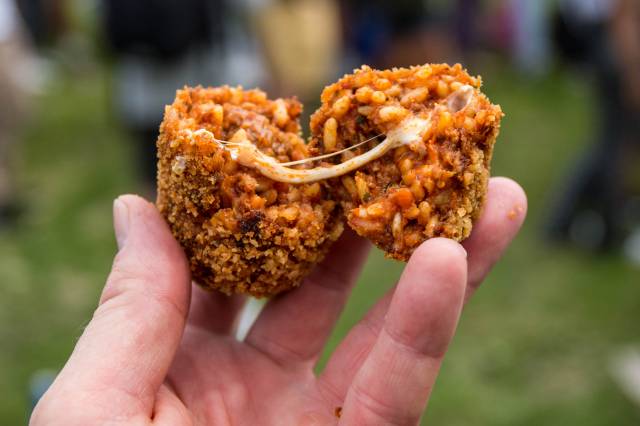 The Italian street-sandwich spot Trapizzino has a booth here, but the things to get are the suppli, which are dense, chewy, fried rice balls filled with beef ragu sauce and melted mozzarella. Makes a perfect two-buck snack.

High rollers who shelled out $265 for a VIP pass can feast upon Paper Planes (which I was told is cool-person slang for "rolling a joint") from Chefs Club Counter—these are bowls of cold noodles topped with, for example, smoked salmon, crisp vegetables, fried shallots and a ginger shoyu dressing.

Other good VIP-only options are the ice cream at OddFellows (I had a double scoop cone of Sprinkles and Thai Iced Tea); and the Cali Burrito, complete with fries, at 2nd City. Of course, there are also plenty of booths in all areas selling booze, wine, and beer.

#panorama fest
#panorama festival
#summer 2017
#original
Do you know the scoop? Comment below or Send us a Tip