What Is Poke & Where Should You Get It?

As the trend watchers predicted, New York City is in the midst of poke-sanity, with multiple new restaurants dedicated to the Hawaiian fish dish open now or in the near future. Check ya later chicken! The poke trend has already exploded over Los Angeles, so now it's time for New Yorkers to get in on the fish party.

But what exactly is poke (poh-kay)? In the simplest terms, it's a raw fish salad, similar to a tartare or even ceviche, though poke is typically less acidic. Raw tuna, typically, is marinated in soy sauce and sesame oil then tossed with onions, jalapenos and wasabi, for example, though the combinations are myriad. Regardless of the protein source, another poke standout is the cubed shape of the meat, as the word comes from the Hawaiian for "to slice or cut."

Some restaurants offer pre-set poke creations, but a popular choice is a DIY version, where diners are in charge of their own destiny. Regardless your predilection, here are a few options for experiencing a little bit of Hawaii amidst the NYC snowscape.

Noreetuh There's a lot more than poke on the menu at this East Village newcomer, but naturally the Hawaiian eatery is also serving their own version of the fish dish. Their Big-Eye Tuna Poke includes macadamia nuts combined with pickled jalapenos and seaweed, for a spicy, crunchy umami bomb of fish flavors. 128 1st Avenue 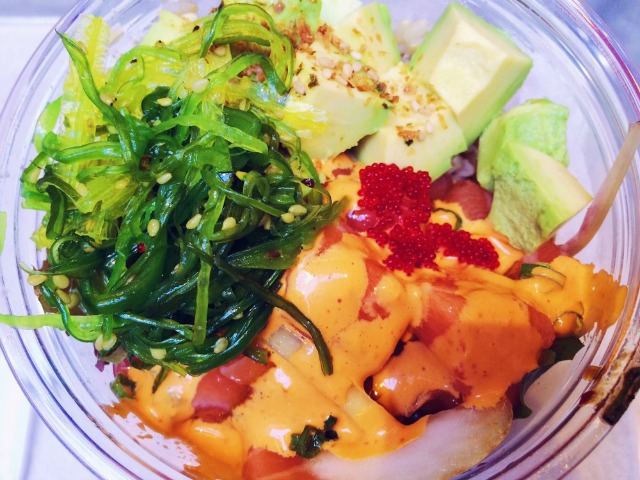 Sons of Thunder (via Yelp)

Onomea Over in Williamsburg, Onomea is also celebrating the many cuisines of Hawaii including a simple but flavorful version of poke. Their offering is a starter of ahi tuna with white onions, seaweed, green onions and sesame, in very classic style. 84 Havemeyer Street

Suzume Also in Williamsburg, Suzume offers several ways to indulge in raw fish alongside steaming bowls of ramen. Their poke comes wrapped in nori, like a piece of sushi, in salmon (in a calamansi ramp vinaigrette) and tuna (sweet onion, sesame, chili oil) varieties. 545 Lorimer Street

Mother of Pearl This new Avenue A Polynesian tiki bar employs savory miso and seaweed furikake for their tuna poke, which is studded with soy tapioca and macadamia nuts. Instagram it alongside the bar's bloody shark cocktail. 95 Avenue A

Sons of Thunder Brave Murray Hill for a taste of West Coast cuisine, which to the minds at Sons of Thunder means hot dogs and poke. They're offering five different versions of poke here, all served over white or brown rice and some tortilla chips. opt for traditional ahi tuna, salmon, tako octopus and more, tossed in either shoyu or a spicy marinade with the option to add mix-ins like avocado, edamame and nori. 204 East 38th Street

#explainer
#hawaii
#poke
#original
Do you know the scoop? Comment below or Send us a Tip